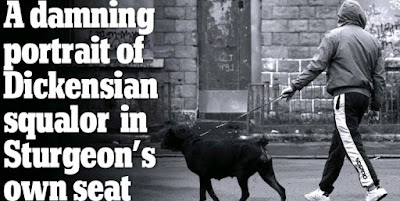 Vulnerable families are being exploited by "rogue landlords" and are living in substandard homes in the Govanhill area of Glasgow with many too afraid to speak out. An investigation found a number of de-registered landlords are continuing to work in the area despite being officially struck off. It also revealed public money is being used to buy up slum housing. Over the past seven years, Glasgow City Council has spent £25m on "common repairs" to properties in the area. The council has been given the power to purchase and improve properties in four tenement blocks in the area. The £9.3m scheme funded by both the Scottish government and the council itself, is a two-year pilot and the first of its kind in Scotland. The tenement blocks have also been designated an Enhanced Enforcement Area (EEA), meaning the council will have more powers to tackle rogue landlords and improve conditions. It gives the local authority right of entry to rented properties where there have been complaints, as well as the ability to carry out disclosure checks on problem landlords. To date, no compulsory purchase orders (CPOs) have been used to force their hand. Jim Monaghan, head of the Govanhill Baths Community Trust, has criticised the "light touch" of the project. He said: "The idea was to attack rogue landlords, the people that were bringing the area down if you like. Without CPOs to reach the targets they need they're just buying houses from people who want to move out. There's advantages of it coming back into public ownership but it certainly wasn't the plan. The EEA was designed to tackle the worst landlords and I don't believe that's happened at all."

"The worst cases are the ones with newborn babies in flats that don't have running water," said Rachel Moon, of Govanhill Law Centre. The centre sees hundreds of new clients every week who are living in substandard homes or who have had their deposits stolen. And she said the landlords are often at the root of the problem. "The audacity of some of the landlords is totally remarkable," she said. "We must have had 12 cases in five weeks of slum landlords moving into property that was being demolished. They were changing locks, making up fake tenancy agreements and putting signs in the window saying the property was for rent. People were phoning the number, paying the deposit and the first month's rent. But obviously this was not a legal tenancy so the clients were then losing their property."

Ch. Insp Graham McInarlin, of Police Scotland, said they were investigating reports of landlords who have been struck off but remain in business. He said: "They take over a derelict property, take several months of rent up front and in actual fact they don't own the flat in the first place." One landlord has 17 trading standards cases against him.

Shaban Rehman, was de-registered as a landlord in May after taking £7,000 of deposits from tenants. His Better Homes letting agency was dissolved earlier this year, but BBC Scotland has learned that the business in Govanhill has remained open. He has now being reported to prosecutors for alleged fraud, theft and for acting as a landlord while unregistered.

Mohammed Nawaz has been described as one of Scotland's most notorious landlords. Mr Nawaz, who owned a host of flats in Govanhill, was banned in 2012 from acting as a private landlord and letting agent. Local agencies say he has continued to practice through relatives and friends. He faces two trials in the next six months for charges including threats of violence, aggressive behaviour, approaching tenants outside of property and threatening to return to evict them, embezzlement, theft, fraud, forcing entry and changing locks.

Johar Mirza, wanted by the FBI in connection with alleged fraud, is under investigation by Police Scotland for his practices as a landlord. He is currently serving a prison sentence for attacking a woman but he is still registered as a landlord. Officers say his properties are still being let to tenants and some fall below tolerable standards.

Mohammed Adam Hussain was sequestrated for outstanding debts to the council. He is also under investigation for breaching landlord registration rules in the area.
Mohammed Aslam was de-registered by Glasgow City Council in 2008 following an investigation which concluded he was "not a fit and proper person" to be a landlord. But Mr Aslam is the currently back on trial at Glasgow Sheriff Court and faces charges against him: that he acted as a landlord without the required registration with Glasgow City Council.

The SPGB says it is no use to approach the problem with just another slum clearance scheme. It needs a world in which society's first concern is for the security and happiness of the human race. It is said you can recognizse a landlord from his girth, gained from high rents on slum dwellings inhabited by poor people. It is a strange thing how all these well-intentioned people overlook one thing. The investigators have all commented on the fact that these homeless families all live on low wages so it is the families with low incomes who are liable to be homeless. The rent is too high, the income is too low. Poverty is the word, and the present increase in the number of homeless is due to just that. The whole question of housing or lack of it throughout the world, is part of the problem of poverty.