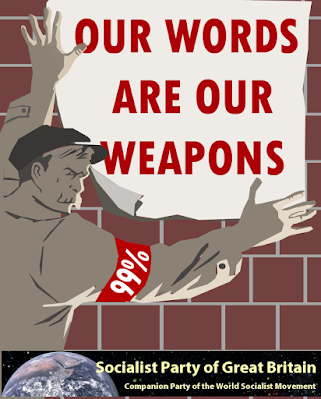 It is not particularly scientific to lay down an exact blueprint of how future socialist society will be organised but we are not concerned to design a blueprint for socialism - to say that this or that is how the future must be. No individual, or any minority of socialists, can abrogate to itself the decisions about how to live. These must be determined democratically by the people who make the socialist revolution. We can also imagine that the detailed structures of socialism in the different parts of the world won’t have to be exactly the same and will become clearer the nearer we approach it. Drawing up a detailed blueprint for socialism is also premature, since the exact forms will depend upon the technical conditions and preferences of those who set up and live in socialism. When a majority of people understand what socialism means, the suggestions for socialist administration will solidify into an appropriate plan. It will be based upon the conditions existing at that time, not today.

Socialism is not a blueprint as to all aspects of the alternative society to capitalism, only a definition of what its basis has inevitably to be. What we can do, however, is to offer a glimpse into society as it could become once it is freed from the stranglehold of the money-men. We can describe certain basic principles and guidelines, and give an indication in very broad and tentative outline of the way we think society might be conducted. But the exact administrative structure and precise mode of behaviour of people in a socialist society will be determined by the specific material conditions of that society. What these specific material conditions will be, and how people will react to them, cannot be known to us at the present time.

Marx and Engels had relatively little to say about the future, partly because they held the drawing up of blueprints for an ideal society to be the very essence of utopianism, utopian as in idealistic, in the sense of an ideal society projected into the future and unconnected with existing social trends. Before the coming of industrial capitalism, the yearning for an egalitarian society could only be a yearning, without any concrete analysis of social reality. By refusing to write recipes for future cook-shops, by failing to talk about the future society except in very general terms for fear of being dubbed “idealist”, they in fact signalled that the building of socialism, as distinct from the opposition to capitalism, was not high on their agenda. Yet for socialists the building of the new society, by spelling out what common ownership, democratic control, production solely for use, and free access mean as a practical alternative that people can support now, must now be part of our agenda.

It is not easy to convince someone of the necessity and feasibility of a fundamentally new society by simply elaborating the description of the future. No matter how appealing that future society might appear, compared to present-day reality, it will probably still seem to be a figment of the imagination.

Nevertheless, what Marx and Engels did say was usually positive and in line with their generally optimistic view of human nature and the capacity of workers to build a better, more equal and more truly human society than that of capitalism. In particular, Marx wrote of the variety of useful and pleasurable work that would be available to people, in this well-known passage:

"In communist society, where nobody has one exclusive sphere of activity but each can become accomplished in any branch he wishes, society regulates the general production and thus makes it possible for me to do one thing today and another tomorrow, to hunt in the morning, to fish in the afternoon, rear cattle in the evening, criticize after dinner, just as I have a mind, without ever becoming hunter, fisherman, shepherd or critic"

On another page he summed up the same thought as follows:
"In a communist society there are no painters but only people who engage in painting among other activities"

What Marx and Engels envisaged for the future society, from its very beginning, was a kind of participatory democracy organised without any political leaders or administrators at all, which requires some effort of imagination and historical understanding for the present-day readers to grasp

"Communism puts an end to the division of life into public and private spheres, and to the difference between civil society and the state; it does away with the need for political institutions, political authority, and governments, private property and its source in the division of labour. It destroys the class system and exploitation; it heals the split in man's nature and the crippled, one-sided development of the individual...social harmony is to be sought not by a legislative reform that will reconcile the egoism of each individual with the collective interest, but by removing the causes of antagonism. The individual will absorb society into himself thanks to de-alienation, he will recognise humanity as his own internalised nature. Voluntary solidarity, not compulsion or the legal regulation of interests, will ensure the smooth harmony of human relations… the powers of the individual cam only flourish when he regards them as social forces, valuable and effective within a human community and not in isolation. Communism alone makes possible the proper use of human abilities" so wrote Lezlek Kolakowski, a Marxist commentator, ‘Main Currents of Marxism’,

But some statements by Marx and Engels about the socialist/communist future seem to show that they were not entirely immune from a conception of that future still rooted in the capitalist past. A particular worry about scarcity of goods in the early stages led Marx to consider labour time vouchers or certificates:

"What we have to deal with here is a communist society, not as it has developed on its own foundations but, on the contrary, just as it emerges from capitalist society; and which is thus in every respect, economically, morally, and intellectually, still stamped with the birth-marks of the old society from whose womb it emerges. Accordingly, the individual producer receives back from society—after the deductions have been made, exactly what he contributes to it. What he has contributed to it is his individual quantum of labour"

Two points here. One is that modern production is social, not individual. It is doubtful whether the value of the "individual quantum of labour" could have been measured in Marx's time except in the crudest terms of time. It is even more doubtful whether such a measure could be made today. The second point is where Marx made it quite clear that, if labour time vouchers were used in socialism, this would be a temporary measure resulting from the comparatively low level of technology. Today potential abundance resulting from improved technology has made the idea of labour time vouchers quite outdated. It will no doubt become even more outdated in future. In a particular situation of actual physical shortage perhaps resulting from crop failure we can assume that the shortage can be tackled by some system of direct rationing such as prioritising individuals needs by vulnerability (according to needs), and if there is no call for that criteria, by lottery, or simply by first come - first served.

"Communism rises above the enmity of classes, for it is a movement that embraces all humanity and not merely the working classes. Of course no communist proposes to avenge himself against any particular individuals who are members of the bourgeoisie…Should the proletariat become more Socialist in character its opposition to the middle classes will be less unbridled and less savage… It may be expected that by the time the rising comes the English working classes will understand basic social problems sufficiently clearly for the more brutal elements of the revolution to be eventually overcome—with the help of the appearance of the Communist Party" (Engels).

This shows a progression of Marxist thought from a capitalist present that is in many ways divisive and brutal, to a communist/socialist movement that is in a transitional stage from divisiveness/brutality, to a future society that will embrace all of humanity. Engels quite reasonably expected workers to become less brutal as they adopted socialist ideas. The working class puts and end to human exploitation not as a conscious goal on behalf of all humanity, but as the inevitable by-product of ending its own exploitation. It accomplishes the general interest of humanity by acting in its own self-interest.

This “movement” of the working class could be said to be implicitly socialist since the struggle was ultimately over who should control the means of production: the minority capitalist class or the working class (i.e. society as a whole).

At first the movement of the working class would be, Marx believed, unconscious and unorganised but in time, as the workers gained more experience of the class struggle and the workings of capitalism, it would become more consciously socialist and democratically organised by the workers themselves. The emergence of socialist understanding out of the experience of the workers could thus be said to be “spontaneous” in the sense that it would require no intervention by people outside the working class to bring it about. Socialist propaganda and agitation would indeed be necessary but would come to be carried out by workers themselves whose socialist ideas would have been derived from an interpretation of their class experience of capitalism. The end result would be an independent movement of the socialist-minded and democratically organised working class aimed at winning control of political power in order to abolish capitalism.

This, in fact, was Marx’s conception of “the workers’ party”. He did not see the party of the working class as a self-appointed elite of professional revolutionaries but as the mass democratic movement of the working class with a view to establishing socialism, the common ownership and democratic control of the means of production.

Democratic control is not an optional extra of socialism. It is its very essence. Democracy does not mean that all decisions have to made at general assemblies of all concerned or by referendum; it is compatible with certain decisions being delegated to committees and councils as long as the members of these bodies are responsible to those who (s)elected them. Certainly, workers' councils or something akin to them, as workplace organisations of the workers, are bound to arise in the course of the socialist revolution. But to claim that they are the only possible form of working class self-organisation is to go too far, is in fact to make a fetish of a mere organisational form. What is important in working class self-organisation, however, is not the form but the principle. As stated, what is important is not the form of organisation but the democratic - and socialist - consciousness of the working class. This can express itself in a great variety of organisational forms.