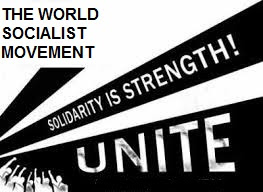 ‘The poor have no country, in all lands, they suffer from the same evils, and they, therefore, realise that the barriers put up by the powers that be the more thoroughly to enslave the people must fall’ (International Working Men’s Association, 1866).

‘In a class society, “the nation” as a homogeneous socio-political entity does not exist. Rather, there exist within each nation, classes with antagonistic interests and “rights”’ (Rosa Luxemburg, The National Question, 1909).

’Imagine there’s no countries; It isn’t hard to do; Nothing to kill or die for; And no religion, too’ (Imagine, John Lennon, 1971).

Borders may be altered, even disappear, but such re-arrangements of frontiers can in no way abolish, or even lessen, the poverty of the many. The solution to that problem will not be found by struggling for independence or a union, but by striving for the world socialist commonwealth.  It would be a true world community, with no countries nor borders, no passports nor visas.

A typical geography school lesson consists of studying maps of the world divided by lines going up and down and across marking all of the different countries. Where are these boundaries when you look at a photograph of the earth from space? Countries are artificial areas and have had many different shapes in recent history according to the fortunes of the ruling class owners in territorial negotiation and war.

Some our critics  give themselves sleepless nights over an imaginary dilemma that we will have to wait until the whole world is  fully industrialised  to vote capitalism out of existence. Firstly the emergence of undeveloped and developing nations as industrial powers does not depend on their own unaided slow rate of growth, but is speeded up by making use of experience and materials and technology of more advanced countries. It can be extraordinarily rapid, as witness the emergence of Japan and of Korea in past decades while in more recent years it has been the progress of China. Secondly the socialist movement does not grow at the same rate as industrialisation, so that the supposed difficulty of large socialist movements in some countries held back by small socialist movements in others is a myth. And, of course, our critics know this very well. So the true position is not that the few tiny socialist parties in the advanced countries are waiting for the benighted masses in Asia, but that the few socialists in all countries are patiently working to win over the masses in all countries. What rightly concerns the companion parties in the World Socialist Movement is the political backwardness of the workers  in their own land. Poverty is by no means only a problem for “under-developed” countries — it is a worldwide working class phenomenon. Every single wage slave, whether he lives in the midst of advanced “free enterprise” or the relative backwardness of Bangladesh, is never free from the threat of being one of tomorrow’s hungry. The vast majority of the world's population, who do not own or control the means of producing and distributing. wealth, are only ever entitled to have access to what they can buy. It is a dangerously insecure existence and it is madness for the workers to look to the bankers to change it for them.

Thirdly, just as capitalist production methods exercise influence in all countries and enable the backward to advance rapidly, so also the experience already gained by socialists in the advanced countries enables the socialists in the developing countries to progress more rapidly than they would if in isolation.

Socialism, undiluted and unadulterated, is what the Socialist Party wants. As to why we want it, only look around you. Millions are in need of food, health care, housing, etc., and the means exist ready to hand whereby they can produce them. Generations of workers have put their faith in legislation and reforms, but we are as far away as ever from economic security. The social revolution offers the only way out. Muster, then, under our banner, with a view to its speedy accomplishment.