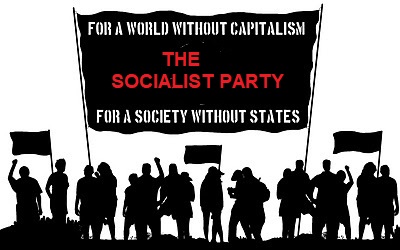 It is not fully possible for working people ground under the iron heel of capitalism, to undertake the administration of society. Under the rule of capitalism the working class is enslaved and oppressed. The Socialist Party fights not for shorter working hours and higher wages, but also for the liberty, equality, fraternity of all human beings, regardless of gender or origin.

The new technological developments we see arising today  , far from resolving the economic, social and political problems of capitalism, serves to further accentuate them with  the polarization of great wealth at one pole and abject poverty at the other; to increase the rivalry and competition for markets and cheap sources of raw material.

The Socialist Party will press on to  awakened our fellow-workers to the task to end wage-slavery and usher in of the socialist society. Socialism cannot be introduced without  public opinion supporting the socialist idea. Whether that support is won at the ballot box or through industrial and direct action is not so important as that it be won. Even  if our methods prove ineffective, or is withheld from us in the future, we shall still have to go forward until we do gain the socialist commonwealth by the best means available to us. The error that many  make is in thinking that by engaging in the day-to-day struggles on the economic field that the workers will follow them on the political arena. This does not necessarily follow

One thing is evident. If we cannot get people to vote for a socialist party, there is little hope of getting them to take up arms on behalf of our cause. It may be too early to decide definitely what course we shall finally have to pursue to gain the socialist commonwealth but there can be no harm in getting as many votes at the ballot box as possible in those countries that permit elections.

The Socialist Party’s aim is to abolish capitalism and reorganise society on a cooperative basis. We recognise that in this endeavour, we are up against the most powerful ruling class in the history of the world. Our responsibility as a Marxian party is to expose illusions, fallacies and falsehoods, to agitate against every type of racial and national prejudice and against every delusional  half-baked panacea.

From childhood, by every available means – popular culture in the media, church sermons, political speeches, books and newspapers, songs and anthems, statues and monuments – the people are brain-washed in one direction– patriotic nationalism. Once at war, you look behind and there are no politicians, no high ranking generals, no media moguls. It is you who faces death and injury. Those that exalted sacrifice for nation are back home at their country estates. Every society  we have  known has been   governed by the selfish interests of the ruling class. They speak of national interests, national spheres of interest, pride in national honour, and a national culture to be defended  but we forget that behind all this are power-loving politicians and money-loving business men for whom the nation is a convenient cover to hide their personal greed and their schemes for political power from the eyes of the world. Loyalty to ones own countryman or even kinsfolk has never prevented a capitalist from seeking foreign labour if it was cheaper and can make more profit.  Self-sacrifice, duty and public service is not for the capitalist values to be actually followed, but only beliefs to be imposed upon his servile subordinates.

The working class desires peace and therefore it must wage the class war. It is necessary to end the power which incites the nations against one another; it is necessary to struggle against the causes of continual conflicts, and to put a finish to the system by which the red blood of the workers is turned into gold. War must be made impossible by destroying its deepest and most  hidden roots. The  aim of the Socialist Party is to bring about a state of affairs in which war will not exist. A war-free society  is only possible in a society without exploitation and the abolition of private property in the means of production.

The Socialist Party is not satisfied with destroying a poisonous fruit—war— rather, we consciously weed out the deepest roots of this mass-murder—capitalism.