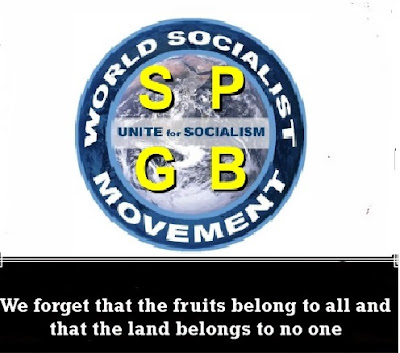 Commonly the word “socialism” is used as a political trick. The Labour Party is called “socialist”. It is suggested that countries with large welfare programmes are socialist or that nationalised industries are socialist. Socialism is not government ownership nor its control over industry. This has nothing to do with the socialism.

The division between owners and non-owners has got sharper and deeper. As a matter of historical fact the process is a process of fewer and fewer owners and more and more non-owners, that is, the workers. The State’s military and police are the armed guards of private property. By private property is not meant the private possessions of individuals but the private property of ownership of the means of production, the factories, land etc. The fundamental (not the only) purpose of the army and police is to prevent seizure by the non-owners of the private property in the factories and in huge tracts of land. Socialism, in the words of Engels, is not the government of persons, but the administration of things. The state, and its authority masking itself as democracy, disappears. The path to socialism is not through government control, state ownership or even through worker administered cooperatives. It is through a fundamental change in economic and class relations. The socialist revolution consists of the entire process, on a world scale, through which the socialist mode of production is established and supplants the capitalist  mode of production. The goal of the socialist revolution – the abolition of capitalist private property, the abolition of all exploitation of man by man, the common ownership of the means of production and their planned use for the benefit of the whole of society, leading to abundance and community harmony. The Socialist Party does not put forward this goal as a utopia, as a mere aspiration of what would be nice and makepeople happy, but as a goal the practical attainment of which is made necessary by the actual conditions of modern society.

The international working class can emancipate itself only by emancipating all of humanity, by eliminating the rule of capital and the chains of wage slavery.  socialism is indispensable to real freedom.  As  champions of democratic methods in every respect, the Socialist Party will do everything to make the peaceful road to socialism something  of importance . But even where the peaceful road is blocked, socialists hold to the democratic road; that is the only road to socialism. The Socialist Party always and everywhere seeks its objective not against the will of the people, not over them, but as their instrument. Socialists talk of comradeship, of democracy and of the working class and its ceaseless striving for human dignity and socialism. A world  socialist movement must be a genuinely democratic  movement against capitalism. The fundamental objective of the working class is the overthrow of the capitalist system and the establishment of socialism. The fundamental economic distinction between capitalism and socialism is this: in a capitalist society, a handful of people–the bourgeoisie–own the means of production and organize the economic activity of society in accordance with their own accumulation of profit; in a socialist society, the the people collectively  owns the means of production and organises the economic activity of society in accordance with the social needs of the people.

“...Survival for all capitalists rests with their capacity to extract value in the form of unpaid labor, or profit from working people. No serious capitalist would hire a single worker without this expectation. But with the ever-increasing substitution of machines/robots and computer technology for human labor, the world capitalist order finds itself in constant crisis and decline. Intense competition forces all capitalists to introduce new technologies to survive. In time, the average amount of human labor embodied in all commodities is reduced and with it, average rates of profit.

Technological advances, especially those of a clean and environmentally sustainable nature, in a rational society should pave the way for social advances. In a socialist society, where human needs, not capitalist profits are primary, clean and sustainable labor saving technology portend a major increase in leisure time for all working people, time for the fullest engagement of all in the highest levels of free education, time for the fullest development of the human potential, time to explore a broad range of cultural, scientific and educational interests, time to encourage the best aspiration of humanity for freedom and equality.

…Whether it be overt union busting, obliteration of pensions and health care benefits, workplace speed up, offshoring plants to low wage nations, imperialist conquests to secure vital resources, cutbacks in social services, “elimination of welfare as we know it,” tax relief of the rich at the expense of workers and the poor, or pumping $billions and $trillions of taxpayer money into corporate bailout schemes, the objective is the same – to preference the corporate elite at the expense of the vast majority – a preference driven not by any moral failings of the super rich, but by the necessities imposed by the very operation of the system. This has little or nothing to do with capitalist greed and avarice, however much these are built into their psyches. Whether capitalists are well-intentioned or evil, they must deploy one or another or all of the above measures aimed at workers to keep their businesses afloat in the face of the incessant competition that drives them to survive or perish. …”

As Biden Returns “Civilization” to Washington, It's More Obvious Than Ever That Capitalism Cannot Be Reformed - CounterPunch.org