The Socialist Party: In Search of Tomorrow Today

We know that it is only on at the level of a world scale that the problems facing wage-workers in all countries can be solved. Our message, then, is equally addressed to all fellow-workers across the globe and not just to those in the UK. world socialism is the only solution to the problems of wage-slavery in the country you reside, problems which are basically the same—unemployment, struggles to keep wages up with prices, bad housing, schools and hospitals, racism, insecurity and so on — precisely because they have a common cause — the capitalist system of class monopoly of the means of existence and consequently production for profit. Capitalism is international. Economically, it operates as a single system dominating the whole world but, politically, it is divided into a hundred or so artificial “nation-states”. Each of these states seeks to ensure the loyalty of its subjects by inculcating into them, from the cradle to the grave, the idea that they are members of a “nation” with a common interest against those of other “nations”. Socialists reject this mistaken and dangerous idea, regarding themselves not as British, Irish, French, American or whatever but as members of the human race, as citizens of the world.

The real division in the world is not between people of supposedly different “nationalities” but between two social classes both of which are international: a class of capitalists and state capitalists who own and control all that is in and on the Earth and a class of people who, excluded from such ownership and control, are obliged to work for an employer (private or state) in order to live. Wage and salary earners everywhere, whatever their language, legal nationality, skin colour, have a common interest.

The world capitalist class are continually competing against each other to sell their goods profitably on world markets, to obtain cheap and secure sources of essential raw materials; to find fields in which to invest their capital more profitably. They also compete for strategic areas in order to protect the markets, trade routes, raw material sources and investment fields they have got or want. The various armed states into which the world is divided are used by rival groups of capitalists to protect and further their interests in these clashes. They represent, in other words, not the interest of the majority of their subjects, but that of the dominant section of the capitalist class established within their borders.

In these clashes of interest between the various national capitalist groups success greatly depends on the military might of the states involved. States, and the capitalists they represent, do not deliberately seek war; for them this is often the last resort, when negotiations failed. But all states are obliged to maintain as powerful an army as they can afford, not necessarily to be used on every occasion, but to threaten and to be taken into account in the negotiations and manoeuvrings that continually arise from the underlying clashes of economic interest that are built in to capitalism.

Capitalism, in other words, is a permanent powder-keg or rather, these days, a permanently-primed nuclear bomb. Its very structure as a competitive profit-seeking system generates the degradation of the environment and wars.

But there is an alternative way of organising the world. There already exists a global network of productive units (farms, mines, factories, railways, warehouses) capable of turning out sufficient wealth to more than adequately feed, clothe, house and educate every single man, woman and child on this planet. Technologically, this is possible, but it will only become possible socially when the resources of the world have become the common property of all the people of the world. In other words, after the abolition of private and state ownership everywhere. Or, what amounts to the same thing, the abolition of all ownership and property since in a socialist world the resources, natural and man-made, of the planet will belong to nobody; they will not be owned at all, but will simply be there to be used. Naturally, the people of the world will have to organise themselves to use these means of production and this is the second feature of socialism: democratic organisation.

On the basis of this common ownership and democratic control production will be directed solely towards satisfying human needs. The restriction of the profit motive will be removed and as much will be produced as people will democratically decide will satisfy their needs, both as individuals and as a community. The waste of capitalism, such as on armaments and wars, will be eliminated, thus making doubly sure that ah abundance of wealth can be produced, an abundance to which every member of socialist society can have free access, without payment of any kind, according to what they judge to be their need.

Socialism will see the abolition of frontiers too and the dismantling of the various armed states into which the world is now divided. As classes will have been abolished, people really will become citizens of a united world.

If this alternative of a class-free, money-free, state-free world community, without frontiers interests you and you would like to know more or would like to help us, we invite you to get in touch. 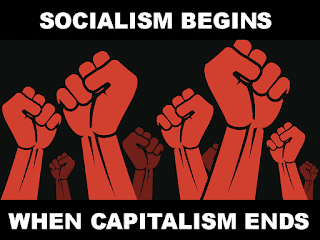