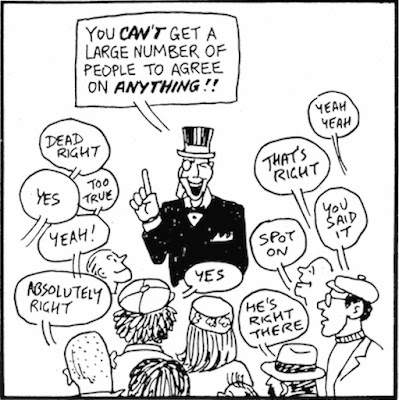 Socialism is the end of the exploitation of labour and no person or corporation will get rich off the labour of another person, but all people will work for the collective benefit of humanity. The Socialist Party is for the building of a new world without capitalism and without the exploitation of man by man. Capitalism is anti-human. Karl Marx wrote that in production "the machine dominates man, not man the machine."

What do we want out of life? The vast majority of the population is made up of workers and their families in the factories and mines, transport and communications, and in offices; small farmers; professional people such as teachers, doctors, engineers, musicians. Among us there are many differences in standard of living, in taste, in outlook. But we have many things in common. In one way or another, all of us work for a living, most of us for an employer; and we are very much alike in what we want to get out of life. Except for the tiny minority which has great wealth at its command, the first thing that all the people want is a decent standard of living. No person wants to live merely in order to work. A person works because one wants to live. Before we can satisfy any other interest, we want decent food to eat, decent healthcare, and a decent home for ourselves and our families. This is a pretty modest ambition. With our tremendous industrial capacity, our modern machinery, our highly efficient labour force, our adequate resources and raw materials, this modest yearning could be achieved almost overnight for everybody – provided society were organised rationally.

The Socialist Party aspire to simple things which people everywhere long for:

We want peace, instead of bloodshed and violence and destruction.

We want security, instead of insecurity, the terrible business of not knowing today whether or not we will have a job or an income tomorrow.

We want to be sure that we will be able to raise our families in decent homes and good schools.

We want democracy and freedom, instead of regimentation, bureaucracy, racial and religious and national conflict.

We want an end of class tyranny and oppression.

We want freedom to fully satisfy  our needs, without any limit other than imposed by their natural possibilities and the needs of their neighbours, which are equally worthy of respect.

We want the right to live for all, in its entirety, without exclusion, without exception.

We want a modern civilisation.

We have vast industries. We have the natural resources. We have trained and skilled workers. We can produce in one day what it took our ancestors years to produce.  Without capitalism’s imperative to “grow or die,” production will no longer be undertaken for its own sake, allowing the concern for the environmental consequences of unrestrained growth to be harmonised with the need for human well-being.

What we get is largely the very opposite of what we want. We are going into debt at an appalling rate, just to “make ends meet.” Many families have no savings. It is a dark harbinger of the future. We know what we want. The first thing to do is to find out what it is that stands in the way of our desires, why it is that we haven’t gotten what we want up to now. Then we will decide what we must do.

It is the capitalist system that stands in the way where a handful of capitalists control all the wealth and power in the world. This handful owns industry, mining, transportation. It owns our jobs. Whoever owns all these things, controls our lives, the lives of you and me and tens of millions of others. The only struggle for us is the struggle of the workers against their exploiters.

We, in the Socialist Party, believe there is an alternative. The alternative to a capitalist government and capitalist chaos is socialism. We want to take over the industries built by us – by us and nobody else. We want to take over the wealth produced by us – by us and nobody else. We want to, and we can, run industry to produce for peace, not for war. To produce for us, for the needs and comforts of the people, and not for the swollen profits of the capitalists and corporations. Without capitalism and capitalist profit, we can put an end to war. They are caused by economic rivalry and by the lust to dominate the wealth of the world. Our marvellous machinery performs the terrible miracles of war production. We can make it perform even far greater miracles of peacetime production to provide plenty for all, homes fit to live in, comforts and prosperity, self-respect and human dignity. Those are the things we all want. They are the things the Socialist Party stands for. We must stand together. No worker must stand against a worker to the advantage of the capitalists. 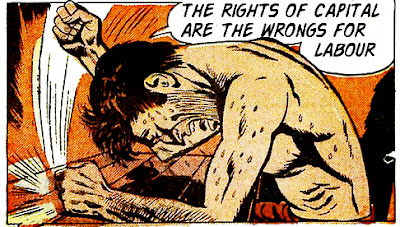