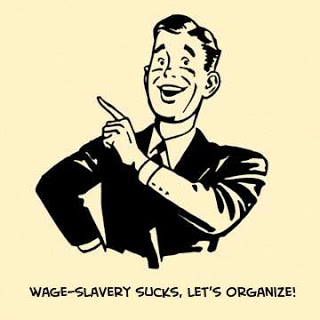 We have always maintained that the spread of socialist ideas does not depend upon the existence of the Socialist Party or its Companion Parties, but that they arise from the system under which we have to live.

1.  The WSM claims that socialism will, and must, be a wage-free, money-free, worldwide society of common (not state) ownership and democratic control of the means of wealth production and distribution.

3.  claims that there can be no state in a socialist society.

4.  claims that there can be no classes in a socialist society.

5.  promotes only socialism, and promotes it as an immediate goal.

6. claims that only the vast majority, acting consciously in its own interests, for itself, by itself, can create socialism.

7. opposes any vanguardist approach, minority-led movements, and leadership, as inherently undemocratic (among other negative things).

8. promotes a peaceful democratic revolution, achieved through force of numbers and understanding.

9.  neither promotes, nor opposes, reforms to capitalism.

10.  claims that there is one working class, worldwide.

14.  seeks election to facilitate the elimination of capitalism by the vast majority of socialists, not to govern capitalism.

15.  claims that Leninism is a distortion of Marxian analysis.

16.  opposes all capitalist war and claims that socialism will inherently end war, including the “war” between the classes.

17.  noted, in 1918, that the Bolshevik Revolution was not socialist. Had earlier, long noted that Russia was not ready for a socialist revolution.

18.  the first to recognise that the former USSR, China, Cuba and other so-called “socialist countries” were not socialist, but instead, state capitalist.

Month after month, year after year, our fellow workers appear to be too satisfied with the capitalist system — or too apathetic — to want to put an end to it. They seem almost fatalistic and resigned to their poverty and misery. Workers feel powerless to deal with the important questions affecting their lives. So they ‘participate’ in politics only to the extent of investing some emotional energy by identifying with some personality whose victory will give them some vicarious satisfaction. The workers’ sense of powerlessness with respect to events also makes them unconcerned with policy issues concerned with proposals for reform. Middle-level bureaucrats, editorial writers, intellectuals, and all species of ‘middle class’ reformers frequently advance proposals that are intended to solve, within the confine of capitalism, such problems as racial conflicts, riots, decaying cities, unemployment, air pollution, and foreign policy dilemmas. Such people often bemoan the lack of interest among workers for these proposals. Workers, through their experience, have developed a cynicism about such promises and they feel “let those who get paid for it worry about it”. Outside the small strata of the decision-makers for capitalism, little serious attention is given to the stuff that is served up by the news media as the subject matter of politics. Thus, in one sense, the American scene remains unchanged. The frivolities and gossip that pass for political and social issues are discussed by a small number of those concerned, the masses apathetic; businesses keep on making profits that are quietly pocketed by the ruling capitalist class, and everyone continually faces the problems which the capitalist mode of production makes inevitable. From this perspective  capitalism everywhere has not changed fundamentally in the past hundred years—only the problems have gotten larger. War, climate change and pandemics, for instance, now threatens to annihilate the human race. Yet still political class consciousness, the conscious desire for socialism, is still all but non-existent

Yet this discouraging sameness is deceptive. Beneath the surface, the forces that shape ociety are at work, ceaselessly changing the foundations. It is not merely that machinery improves, workers become more skilled and new commodities are marketed while capital accumulates. Men and women’s ideas also change as their conditions of life change.

The truth of the matter is that, however successful and secure  capitalism looks at first glance, it is plagued with deep contradictions. These contradictions revolve around the inability of  capitalism, despite its wealth, technology and power, to satisfy human needs. On one hand there is fabulous wealth, on the other hand the most basic of human needs go unsatisfied. Scientists will eventually put a man on the moon but  society cannot perform the simple ask of getting a hungry man with his face pressed against a shop window into contact with the food he needs. Children die of rat bites within sight of the world's marvels of engineering. The illiteracy rate and the rate of infant mortality of the US are above that of far less advanced nations. Farmers are paid not to produce food while millions in the world are starving.

Capitalism is the cause of these many social problems we endure and those problems are world-wide, existing not only in obviously capitalist countries like Britain or France or Germany but also, in the form of state capitalism, in countries like China or Cuba. Because capitalism is world-wide so too must be Socialism, the system which will replace it and whose common ownership, democratic control and production solely for use will provide the framework within which today’s social problems can finally be solved.

This is why we sometimes refer to our object as “world socialism”, making it absolutely clear that we reject all nationalism and all national approaches to working-class problems. It is also why we are linked with Companion Parties in other parts of the world, with the same objective and the same principles as us and which exist in the United States, Canada, New Zealand, and India. 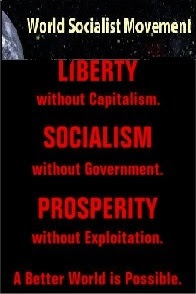