World Socialism for One Planet 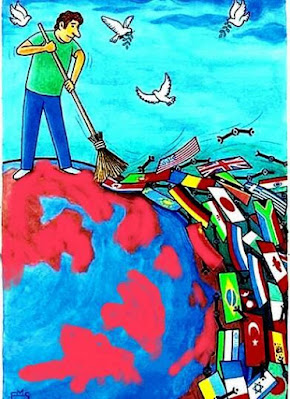 On one hand, capitalism, through the creation of a world market, breaks down the barriers between the nations and paves the way for the spread of an international spirit, on the other hand this same capitalism, by the very fact that it creates a world market, promotes the strengthening of national exclusiveness, by means of international conflicts and wars to secure that world market. The capitalist method of production draws all the nations of the globe together, and simultaneously frustrates its own ends by intensifying traditional national enmities and by systematically bringing the various peoples into conflict. That is why the ideas of universal brotherhood and universal peace could not take lasting root under capitalist society, in which the conflicting trends towards economic rivalries and wars of all against all gains precedence.

For all that, however, the idea of international brotherhood found supporter within the working class and an active champion in the socialist movements. Whereas the globalisation of the corporations is continually frustrated by the competition of national capitalisms, the internationalism of the workers is nourished and  strengthened by the mutual solidarity of the interests of all the workers, regardless of their location or nationality. The conditions of the workers are almost identical in its essential features throughout the world. Whilst the interests of the capitalists of different lands unceasingly conflict with one another, the interests of workers coincide and come to realise this in the course of its struggles. For example, in their attempts to secure higher wages, a reduction of hours, and other workplace protections , the workers continually encounter obstacles, which are brought into existence by the competition between the capitalists of various nations. An increase in wages or a reduction of the working day in any particular country is rendered difficult or almost impossible by the competition of other countries in which these reforms have not yet been achieved. These things have convinced the workers of the solidarity of their interests and of the necessity for joining forces in the struggle fur the improvement of their condition. This workers’ internationalism  is closely connected with  socialist aspirations. In view of the indissoluble economic and political ties uniting the various capitalist countries, the social revolution cannot count upon success unless it also involves, that  complete emancipation is unthinkable without a worldwide socialist reconstruction of society.  The Socialist Party’s goal is the union of the workers of the whole world in a common struggle for emancipation. Our socialism  is anti-nationalist in that we  oppose everything which comes under the head of national chauvinism, patriotism, jingoism, and imperialism.

The emancipation of working people can be achieved by the transfer to common ownership of all the means and objects of production, a transfer which will entail:

(a) the abolition of the present commodity production (i.e., the purchase and sale of products on the market) and

(b) its replacement by a new system of social production with a view to satisfying the requirements both of society as a whole and of each one of its members within the limits permitted by the condition of the productive forces at the given time.

(c) The direct participation of citizens in the management of social affairs presupposes the abolition of the present system of political representation and its replacement by direct popular decision-making. 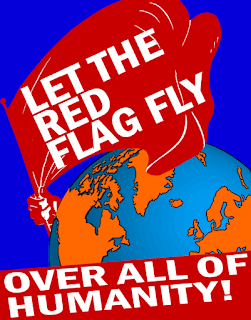