Nothing but a radical transformation of basic social relations can prevent the worst possible outcomes of the present climate crisis. Some environmentalists call upon people in developed countries  to accept a lower standard of living  in order to deal with the global warming emergency. But demanding that working people change their lifestyles is unlikely to convince our fellow-workers  when capitalist austerity is already cutting living standards. But the real factor is that the huge carbon emissions in developed countries are beyond the control of individuals but arise from the military presence, the modes of  transport, and the system of industrialised  agriculture. We need to focus on sustainable ecologically sound production methods where the economy is democratically and rationally controlled by the people, organised to provide the greatest possible public benefit.

Time and again, the  labour movement has taken up the struggle to reduce the work-week and improve workers’ conditions. Workers have strived for a world where people have more control over their lives, and one that builds the bonds of solidarity by uniting the interests of workers. This is the class struggle,  the daily war that goes on between capitalists’ search for profit and workers’ search for a decent living. We cannot, of course, make things right factory by factory or city by city because, after all, we are talking about changing the entire economic system which is the root of the capitalists’ drive for profit. There is no shared interest between the workers and management. The working class’ struggle for survival and an improved standard of living is a constant threat to the employer’s search for profits. The two classes in our society are the owning class, which owns the factories, banks, stores, etc., and the working class which, of course, works for them. The interests of the owners are individual profit based on ripping off the workers through the basic fact that all their profit comes from our labour. The interests of the working people are social equality, a decent standard of living, fulfilling and safe working conditions, control over our job, and above all, unity that cuts across racial, national and sexual divisions in our class. We create a surplus which goes into the pocket of the owning class and gets recorded in the annual reports as profits.

The capitalist class fears unity within our class more than anything else. A united class, clear on its goals, is unstoppable, and the capitalists realise this. This is why they constantly seek to promote divisions in our class. The old are pitted against the young, men against women, native born against immigrant, black versus white workers. And as our class fights among itself, the capitalists gather tremendous profits, and more importantly, maintain the stability of their system through division in our class. The capitalist political system of “lesser evil” politics is designed to funnel workers into a downward spiral of powerlessness by voting for the least-bad candidates among all the capitalist candidates. It is not a democratic system at all.

There is a class war being waged against working people by the capitalists. In every country, in every corner of the world, workers are being forced into war, racism, bigotry while the capitalists accumulate more wealth. Workers are divided and live in constant fear of poverty and death at the hands of the capitalist class. We are made to feel powerless against an allegedly indestructible power structure. But the opposite is true. A united working class dwarfs the capitalists. Through unity and solidarity across the globe—we could overthrow this unjust and murderous system of capitalism. In order to achieve this workers must organise independently of the capitalists; that there can be no collaboration between the workers and the capitalists. This is the only way to create a world that can answer the needs of all of humanity and all life on the planet. Through the power of a united working class we can establish a truly democratic socialist society without borders, exploitation and oppression. There is no such thing as a kind and gentle humane capitalism. That is an oxymoron. For the economic system of capitalism to survive, it MUST increase its rate of profit by any means necessary. And, in the current world economic crisis, the only way to do that is to squeeze the wealth out of the working class ever harder by waging war, driving down our wages.

We live in a world where pollution of the air, water and soil is increasing. That pollution is the direct result of the crazy, profit-motivated system we live in. And so long as that system is allowed to continue, pollution will continue and increase. Our environment is being systematically plundered for the natural resources capitalism needs to fuel their private-profit industry. Capitalism is destroying the planet. It cannot be reformed, reshaped or restructured—it must be abolished. And the only way that can be accomplished is for the entire working class  to unite behind that goal.

Workers power is the answer. Working people are the overwhelming majority of the population and the ruling capitalist class is only a handful. They hold a monopoly over the media and the institutions of culture that create “public opinion”, as well as all educational institutions. In the final analysis, however, capitalists rule by military and police force and violence. Workers need to break definitively with capitalist parties, all of which are dedicated to preserving and advancing the capitalist system of social, economic and political injustice. Socialism, the ownership and democratic control of the means of production by the working class, and the removal of profit from the system of production, is the aim of Socialist Party.

Socialism will end class oppression and exploitation for all time.  A socialist party with the support of the overwhelming majority—does have the power to end capitalism and replace it with a socialist system that puts people and the planet first. 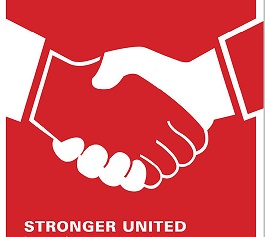