Our object is socialism.

The Socialist Party contends that there is no solution for the workers’ problems except Socialism. It is not possible for the Labour Party or any other party to administer capitalism in such a way that the workers’ problems can be solved within the framework of the existing system. The failure of past Labour government is not an accident. It is not due to mistakes in tactics, or to the failure of the personal qualities of its leaders.

Before the productive power of modern technology can become a beneficial advantage to the whole of society the instruments of production must become common property. They are socially operated; they have yet to become socially owned and controlled. This of course involves the abolition, through political action, of the “rights” of the capitalists to own and control the land, factories, transport, etc. It implies the conscious assumption by the working-class, organised for the purpose, of complete control of the machinery of government so that they may obtain control of the entire industrial resources of society. This abolition of classes is the equality at which socialists aim; but an equality of access to the means of living. Such an equality would render the term “wages” a meaningless one, as no one would be in the position of having to sell their energies in order to obtain a bare subsistence. Our object is to get socialism.

Under such a system it would be to the interests of all to expand the material resources of society as rapidly as possible in order to increase the common stock of necessities and amenities. For so long as these resources are fettered by capitalist ownership, whether in the form of private capitalism or nationalisation, the workers will be restricted to the consumption of such a quantity of goods as is sufficient to enable them to go on producing a profit. Hence we find everywhere that the capitalists, faced with a quantity of goods which cannot be sold, are compelled to take steps to restrict production. Socialism will abolish the need for such restriction and while, even with the present resources of production, it would immediately increase the wealth available for the workers' enjoyment, it would also render possible a considerable expansion of those resources in order that the free development of every individual should be translated from a dream into a reality.

Wages are paid only in order that employing concerns may squeeze out of the workers that profit which it is the object of their existence to obtain. The enthusiasm of even the staunchest Labour voters has been undermined by instance after instance of successful attacks on their wages and working conditions. Knowing that socialism is the only solution and that it can be brought about only when the electors become socialists, we have consistently opposed the Labour Party and its left-wing hanger-ons. We urge our fellow-workers to abandon their illusions and oppose capitalism, including its Labour Party supporters.

The Socialist Party is the only party in this country that has never betrayed the workers’ interests by supporting reform programmes or capitalist parties. We are at present necessarily a propaganda organisation, working to make socialist principles better known. Political leaders thrive not on the knowledge of the workers but on their ignorance. Whether they are honest or dishonest these leaders cannot bring about socialism for the working-class—that the workers have to do for themselves. Which means that they, and not merely their leaders, have to acquire knowledge. It is the purpose of working-class education to give the workers the knowledge. Until the workers rid themselves of their trust in leaders they will continue to be misled, defeated, and betrayed, whenever suitable occasion offers.

The assumption that the Socialist Party attaches no importance to action is grotesque. What we want is sound action, the action of socialists who want socialism. Of course we reject the unsound action of the “something now” parties. Would our critics have us participate in their actions, such as protecting the capitalist system, and—most important of all—preaching the false doctrine that the workers’ problems can be solved by the “something now” policy of reforming capitalism? Our slow progress is merely a reflection of the success of the propaganda efforts of the capitalist parties, including the parties of capitalist reform. But not even their most skilful propaganda will serve permanently to cover up the woefully inadequate results of their “something now” actions. No member of the Socialist Party, proposes to give up our action directed towards the attainment of socialism, in order to perpetuate the endless, useless and dangerous mistakes of the ‘‘something now” parties. In due course the workers, disappointed with that policy, will join us and make socialism a reality. We are optimistic enough to believe that.

The evidence of capitalism's decay, its redundancy, is persistent and overwhelming. The working class, who now run capitalism in every way, need only to see this evidence for what it is and then to opt for the social system which they can run in the interests of the entire human race. 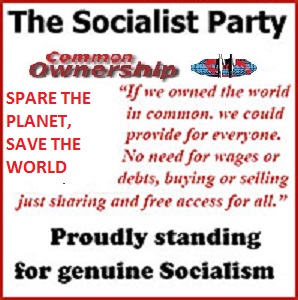