We declare our position here and now 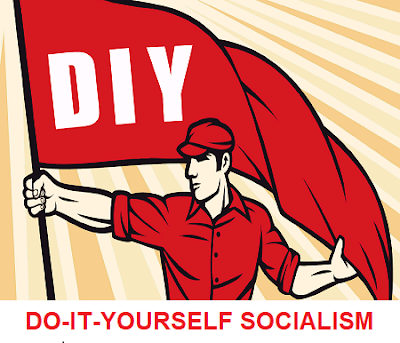 To save the humanity, a different social system is required to be built—one based on cooperation, equality, and freedom, with production for use not profit, with self-management of all aspects of society. Admittedly only a few of our fellow workers are for this now, but for the Socialist Party, this remains to be our revolutionary goal. Whether politicians mean well or are hypocrites, their policies and programmes are simply inadequate for the crises we face. The result is that we are still on the path to an environmental Armageddon and the destruction of civilisation. The reality is that the system cannot deliver solutions. If we really want to build a movement for socialism, and to avoid merely replacing one set of rulers for another, the Left needs to rethink its understandings of class and the nature of the State in light of the evidence and learn from the mistakes of the past, instead of repeating them and expecting a different outcome. The Socialist Party seeks to create a society which will involve neither buying nor selling, nor employers, nor employees.

We’re the ones who build things, make things, provide services, make things work, provide the ideas. But though we build the world around us, it does not belong to us. Everything that has been built around us is the result of our work and yet we don’t work for ourselves. We produce not for ourselves, but at the behest’s and whims of others. The worker is compelled to labour for the purpose of producing something to satisfy the wants of others who, holding the things necessary for his life, thereby control him. He is, therefore, still a slave. We are the ones who are told what to produce, how to produce it, how much, and how fast. We are the ones who receive a pay cheque, be it high or low, not for selling what we produce but for selling our power to work. With that pay cheque we try to buy back what we make. The source of someone else’s profits comes from our work. Capitalism is based on wage-labour and if a theoretical non-capitalist market economy was a reality it would have to be based on self-employed farmers and artisans.

Industrial production can produce goods at a lower cost per unit than handicraft production, with complete laissez-faire, competition would eliminate most of the independent, self-employed artisans. In other words, industry would begin to be concentrated into the hands of the firms employing industrial methods of production. With complete laissez-faire, competition would result in those firms which employed the most productive machinery winning out against those employing out of date and so less productive machinery. So, there would be a tendency towards a yet greater concentration of industry into the hands of the big firms. What about the displaced independent artisans and the members of bankrupt workers’ co-operatives, some may ask? How would they get a living? Would they not in fact be obliged to sell their skills to the firms that had won out in the battle of competition? But if wage labour appeared then so would profits and exploitation. If these profits were to be shared but the continuing competitive pressures would oblige them to give priority to investing them in new, more productive machinery so as to be able to stay in business and not go bankrupt themselves. So even if it were possible to go back to the sort of “free” market economy, the tendency would be for capitalism to develop again. Examples being the kibbutzim and the Mennonites communities which have begun to employ wage labour and orient their production towards making profits and accumulating these as new capital.

When the worker has found an employer he receives in return for his labour a price known as wages which represents on the average what is necessary for his sustenance so that he can reproduce the energy to go on working, and also produce progeny to replace him when his working days are over. During the working-day the worker produces wealth equivalent to that for which he is paid wages, but this does not require all the time of the working day. In providing for his own keep he has also produced a surplus and this surplus belongs to the employer. This may eventually be split into profit to the manufacturer, rent to the landlord, and interest on capital invested by a financier. As capitalism develops the time in which the worker produces his own keep decreases while the surplus accruing to the capitalist increases. During this development the productivity of labour increases at an accelerating tempo: The worker continually produces more with less.

So when a man sells his labour power a number of hours for a certain wage, the amount of necessaries to produce his wages is always smaller than the amount of labour which the employer receives from him, the difference between what the worker receives as wages and what his labour power produces during his working time, constitutes the sole source of unearned income, i.e., capitalist profits. So profits exist because the worker sells themselves to the capitalist, who then owns their activity and, therefore, tries to control them like a machine.

Wage levels will vary with “the respective power of the combatants” as Marx puts it and in the long run this will determine the value of labour-power and the necessaries of life. From the point of view of wage-labour , wage levels and the value of labour-power depends on the balance of class forces, on what workers can actually get from their employers. As wages are also regulated by the relation of supply and demand, a surplus of labour power (the unemployed) is necessary to prevent wages swallowing up all profit. Therefore the unemployed army is a vital necessity to capitalist production, and there can be no solution under capitalism.

It would be wrong to confuse exploitation with low wages. It does not matter if real wages do go up or not. The absolute level of those wages is irrelevant to the creation and appropriation of value and surplus-value. Labour is exploited because labour produces the whole of the value created in any process of production but gets only part of it back. On average workers sell their labour-power at a “fair” market price and still exploitation occurs. As sellers of a commodity (labour-power) they do not receive its full worth i.e. what they actually produce. Nor do they have a say in how the surplus value produced by their labour gets used.

The worker goes into the labour market as an article of merchandise, and his wages, that is, his price, is determined like that of any other article of merchandise, by the cost of production (i.e. the social labour necessary), and this in the case of the worker is represented by the cost of subsistence. The price of labour power fluctuates by the operation of supply and demand. There are generally more workers in the market than are actually required by the employers, and this fact serves to keep wages from rising for any length of time above the cost of subsistence. Moreover, machinery and scientific applications are ever tending to render labourers superfluous, with a consequent overstocking of the labour market, decrease of wages, and an increase in the number of the unemployed. Under these conditions relative poverty is necessarily the lot of the working-class.

We have the worker entirely dispossessed of the means of getting a living except by selling himself as an article of merchandise to the owners of the means of living. This is wage-slavery. While capitalists are as a class against the workers as regards the ownership of the wealth produced by the working-class, they, the capitalists, are also antagonistic to one another in the endeavour to get the larger share of the markets. It wasn’t just Marx but also Fourier who pointed long ago that this competition could only end in monopoly, and we do see concentration an going on in every branch of industry.

Many seek a capitalism with the rough corners smoothed out, the utopian aspiration of a tamed capitalism. What is really required is a fundamental change of the economic basis of society. Many seek an idealised world and call for governments not to interfere in the operation of the market, to let market forces operate unhindered – laissez faire – and that the detrimental effects of the capitalist system can be eliminated by taming global corporations. For as long as capitalism has existed state “interference” or state “intervention”, in the economy has always existed. A corporation-dominated government is really the logical outcome of a class-divided society where the state must serve the owning minority. Individualists attack socialism because they fear the whole of the wealth of society shall be owned by a number of persons incorporated into a State or a bureaucracy, instead of being, as at present, owned by private individuals. They maintain that the right of the individual is supreme, and condemn any action on the part of a State or collection of individuals, that interferes with their desires. But socialists are not statists, that if the working class was compelled to work for a State instead of for individual employers then wage-slavery is not abolished, but is intensified. The worker to-day, while compelled to work for an employer, still has some sort of a choice among those masters, but with the State as the only employer he is compelled to work for that employer and under all of that employer’s conditions, or take the only other alternative – starvation. State-capitalism or as some like to call it State Socialism) would intensify slavery, but state-capitalism is not socialism.

People completely misunderstand Marx if you believe that his solution was to have GOVERNMENT-OWNERSHIP of the means of production and his object was to simply just to REDUCE the power of the capitalist because he wished a mere re-distribution of wealth between capitalists and the working class. He stood for the the ABOLITION OF THE STATE and he stood for the ABOLITION OF CAPITALISM [not its replacement by capitalism in another form]. Critics of Marx should go to the source and forget what the state-capitalist Leninists or Trotskyists say and understand that Marx was in favour of the abolition of the state and its replacement by an “association of associations”, i.e. by a co-ordinated network of neighbourhood councils and producer-controlled production units. Marx made quite clear when he says “The existence of the state is inseparable from the existence of slavery…”

Many have consistently failed to acknowledge or have dismissed as irrelevant the fact that the right of private property leads to control by property owners over those who use, but do not own, property (such as workers ). Free-market capitalist system leads to a very selective and class-based protection of “rights” and “freedoms.” For example, under capitalism, the “freedom” of employers inevitably conflicts with the “freedom” of employees. When stockholders or their managers exercise their “freedom of enterprise” to decide how their company will operate, they violate their employee’s right to decide how their labouring capacities will be utilised and so under capitalism the “property rights” of employers will conflict with and restrict the “human right” of employees to manage themselves. Capitalism allows the right of self-management only to the few, not to all. Bosses have the power, workers are paid to obey. Workers are subject to control from above which restricts the activities they are allowed to do and so they are not free to act, make decisions, participate in the plans of the organisation, to create the future and so forth. 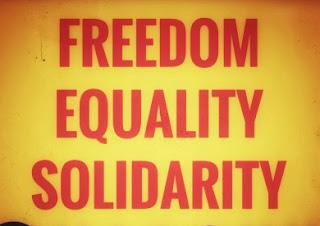