Workers have a world to win, not a nation to fight for. 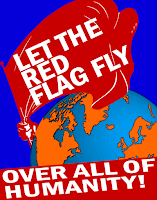 So the pro-Irish nationalists in Glasgow were met with opposition from British loyalists. The Irish Unity march, led by the James Connolly Republican Flute Band, was met by counter demonstrators which resulted, according to the police, in "significant disorder" along Govan Road and the deployment of riot police to separate the two factions. Once more the toxic politics of nationalism poisons the atmosphere.

Workers in Scotland need socialism, not independence. Nationalists do not want to abolish capitalist exploitation. A sovereign Scotland or an United Ireland can only serve capitalism. To pretend that the UK Union is the cause of all the problems is to deliberately fool the people.

Nationalism is an attempt to rally the working class behind the cause of the local bosses seeking better profits or a more secure market. Nationalism does not oppose capitalism. Nationalists acts in the interests of an aspiring ruling class. There are no shortcuts to the socialist revolution, and those who followthe nationalist path set back the revolutionary movement by chasing fake enemies. Nationalism is predicated on the myth of a common identity uniting all the citizens of a given country. This has been cynically and opportunistically promoted by the Scottish and Irish nationalists.

The Socialist Party wants to abolish the private ownership of the means of production and expropriate the capitalists. Workers fight each other instead of attacking the system itself. Nationalism emasculates the workers. It is used to divide the workers among themselves so they can ignore their real enemy. Separatism would divide the workers of Scotland from their fellow-workers in England and Ireland. National divisions are a hindrance to working-class unity, and national jealousies and differences are fostered by the capitalists for their own ends.

It is nationalism that divides the workers so that the workers of one nationality struggle against the workers of another nationality for a few illusory crumbs the rulers throw out exactly for that purpose. If the working class divides its forces, this can only seriously hold back its victory. But if it remains unified, it will be able to triumph.

In the struggle to win the hearts and minds of the working class the Socialist Party has to contend with sacred beliefs and obstacles such as nationalism, the loyalty and patriotism felt by many for "their” country. Nationalism is at the top of the list of political illusions used to blind capitalism's victims. For the Socialist Party nationalist movements represent the interests of the capitalist class but politically they can take on a "right-wing" or a "left-wing" form. The Scottish nationalists choose to present themselves as the latter. However, once the native ruling class has captured and consolidated its power, then nationalism becomes a conservative force. Workers should reject the nonsense idea of nationalism and should unite for their common good to abolish capitalism and work for socialism.

You don’t enhance the power of workers in their economic struggles against the capitalists by taking the same side as those sitting opposite you at the negotiating table and fraternally regarding them as your 'fellow citizens'. Yet depressingly large swathes of the Left have opted for a course of action that effectively submerges and obliterates working class identity in favour of national identity. We witnessed the Scottish Socialist Party convenor sit alongside a hedge-fund manager in the 2014 referendum. And back in history James Connolly took the working class Citizens Army and allied it with those who only a few years earlier it was formed to resist.

The obsession about Scottish independence is one which socialists meet all the time. We encounter it from Leftists who divide their time between paying lip service to the idea of workers of the world uniting and endorsing the nationalism of the SNP or Sinn Fein. Nationalists have always argued that workers would be better off in their own country, free from British rule. Socialists regard it as an irrelevance whether local capitalism is ruled by a Scottish/Irish capitalist state or by a British capitalist state or the multinational corporations..

For the worker in there is but one hope. It is to make common cause with the workers of other countries for the end of all forms of exploitation: saying to both English and Scottish and Irish capitalists: “A plague on all your houses."

For the true battle-cry of the working class is broader, more significant and more inspiring than mere nationalism, and that rallying cry is: