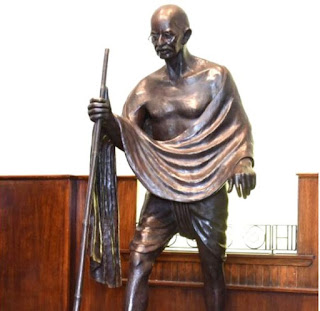 Scotland's first statue of Indian civil rights campaigner Mahatma Gandhi has been unveiled at Ayr Town Hall to commemorate the 150th anniversary of Gandhi's birth. It was gifted to South Ayrshire by the Indian government's council for cultural relations.

South Ayrshire Provost Helen Moonie said: "We are proud of many similarities between South Ayrshire and India and a special link between Mahatma Gandhi and Robert Burns. Both fought against social injustice and used their unique gifts to carve out their place in world history."
Winston Churchill said of Gandhi Churchill on Gandhi
“Ought to be lain bound hand and foot at the gates of Delhi, and then trampled on by an enormous elephant with the new Viceroy seated on its back. Gandhi-ism and everything it stands for will have to be grappled with and crushed.”
During the 1943 Bengal famine when the Secretary of State for India’s telegram requesting food stock to relieve the famine, Churchill replied:
“If food is scarce, why isn’t Gandhi dead yet?” Up to 3 million people starved to death.

Gandhi was not a socialist, preferring to believe that he could use moral force to achieve a more equitable society where capitalists would become trustees over the labourer and a levelling of incomes.

However, a few pertinent quotations that are worth posting.

"According to me, the economic constitution of India and for that matter of that of th world, should be such that no-one under it should suffer from want of food and clothing. In otherwords everybody should be able to get sufficient work to enable him to make the two ends meet. And this ideal can be universally realised only if the means of production of the elementary necessaries of life remain in the control of the masses. These should be freely available to all as God's air and water are or ought to be; they should not be made a vehicle of traffic for the exploitation of others. Their monopolisation by any country, nation or group of persons would be unjust. The neglect of this simple principle is the cause of the destitution that we witness today not only in this unhappy land but in other parts of the world too."

Elsewhere, Gandhi says:-
"The real implication of equal distribution is thateach man shall have the wherewithal to supply all his natural wants and no more. For example , if a man has a weak digestion and requires only a quarter of a pound of flour for his bread and another needs a pound, both should be in a position to satisfytyheir wants. To bring this ideal into being the entire social order has got to be re-constructed."

And again he said:-
" The elephant needs a thousand times more food than the ant , but that is no indication of inequality. So the real meaning of economic equality was: "To each according to his need" .
That was the definition of Marx.

Also he is said:-
“There goes my people. I must follow them, for I am their leader.”
“All humanity is one undivided and indivisible family.
By ajohnstone at September 15, 2019