All socialists in the Socialist Party works for humanity’s fulfilment for humanity doesn’t yet fully exist, only barely so. Society is torn apart by the inevitable class conflict between the capitalist oligarchy and the working class. We look upon the miseries that overwhelm humanity with sadness and anger. Between nations there exists a barbaric regime of hatred and violence. Even in a state of peace, they bear the scars of yesterday’s wars, and the fear of tomorrow’s. To change the world and to create a better one is the reason for the foundation of the Socialist Party. Building a new world for a better future by our fellow-workers' own hands is both necessary and possible. It is a movement for changing the world and creating a free, equal, human and prosperous society. Socialism is not a design or recipe conceived by well-meaning know-it-alls, a bunch of utopian reformers and saviours of humanity. Socialism is a social movement arising from within capitalist society itself, a movement that reflects the vision, ideals and and interests of a vast section of society – the working class. All the propaganda and campaigns of the Socialist Party is aimed at the single goal of the complete liberation of the workers, the collective emancipation of the producers.

Only socialism, by ending all classes through the common ownership of the means of production, can resolve this antagonism and reconcile humanity with one another. Socialism, which will abolish all classes restores humanity to its highest level. Socialism alone can give true meaning to the whole idea of human justice. The Socialist Party maintains that the means of production and wealth accumulated by humanity should be at the disposal of all humankind and should be used to free them. According to us, every man and woman has a right to the means of development which society has created. Socialism when instituted will welcome all human beings from the hour of their birth, and assure to them their full development. Socialism is not an academic and Utopian conception, it is in closest touch with reality, a great vital force which will soon be able to administer society. Working men and women will secure justice only when they control the machinery and technology of society. The potential for a human way of living is already in being. Socialism is not a utopian vision, but the realisation of possibilities which are already here. In humanity’s efforts to find its way out of the nightmare world we need a socialist party. Political freedom without economic liberty is a pretence. The workers necessarily strive after a fundamental transformation of society, the result of which must be the abolition of classes, a system of society in which all men and women will enjoy the good things of life. These are the demands of social justice.

“Reformism” is the doctrine of those who, while saying they are in favour of a social transformation having as it objective establishing society on principles and foundations opposed to that which exist, propose to arrive at this result by a more or less a series of reforms .“Reformist” is the name to designate a person, group, or party that considers the whole of these successive and legal reforms as the best, if not the only means of transforming society rather than substituting the socialist world for the capitalist world. Those political parties who say they are of the “vanguard” and proclaim themselves revolutionary are all more or less reformist. The more reformist they are, the less revolutionary they are, and — and this is the logical consequence - the less revolutionary they are, the more reformist they are. The Socialist Party is frequently accused of professing the doctrine of “all or nothing.” In this accusation there is some element of truth, but only some. It is perfectly true we will fight until not even one stone remains of the capitalist citadel. It must be totally destroyed, so that no vestige of the edifice remains. We understand that the improvements toward which reforms tend are only agreed to by the capitalist rulers on condition that they don’t fundamentally infringe upon the authority of the rulers or the profits of the capitalists. Workers are reasonable people with common sense. We want 100% and that’s all. But if we can only achieve 10%, we'll pocket that as a down payment and demand the rest.

Experience has proved that the isolated organisation are no more powerful than are the isolated workers. Even if all workers' associations of a single country were united it would not be sufficiently powerful to stand up in conflict with the international combination of all profit-making world capital. The emancipation of the worker is no national question. No country, no matter how wealthy, mighty can accomplish a social revolution without the countries of the world. Its only possible through an worldwide socialist movement, founded upon justice and freedom for all mankind. For the triumph of the social revolution itself, violence will be unnecessary. The Socialist Party struggles for the complete emancipation of those who are exploited and enslaved by the capitalist system, advocating that our fellow-workers administer themselves. We want humanity’s happiness. 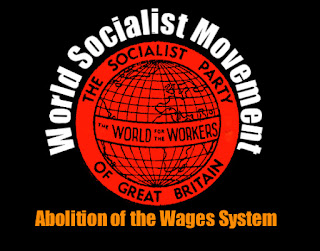