The COP Comes to Glasgow 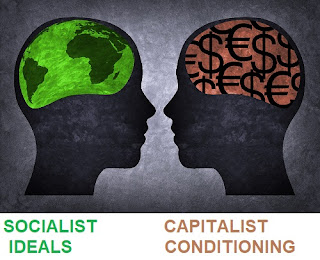 Thousands of people are starting to get politically active at the moment and they bring with them all sorts of ideas. We need to give the socialist vision high visibility and explain the socialist strategy. We hold a distinct alternative conception of society to offer. Many have the belief that socialists are productivists, an ideology that sees productivity in itself as the highest good. Socialists are second to none in denouncing the capitalist logic of production for the sake of production, the accumulation of capital, wealth and commodities as ends in themselves. Socialism is the production of use values, of goods necessary to satisfy human needs. The goal of technical progress for socialists is not the endless production of goods to have, but to transform labour into leisure and integrate work with nature.

The problems of the environment, air, soil and water pollution, the accumulation of wastes, the destruction of forests, the greenhouse effect, all are setting up a catastrophic scenario where the very survival of humanity is at stake. The Socialist Party is well aware of the blind irrationality of the capitalist market, with its shortsighted profit and loss accounting. The Socialist Party is crafting a non-commodified future that is based upon based on non-monetary economy.

Many voices in the ecology movement inform us that we are responsible for climate change and that it is our fault that the planet's environment is fouled up. They tell us that we each individually contribute to carbon emission because our “excessive” consumption causes manufacturers to increase their production. The size of the carbon footprint of individual people is very small and practically irrelevant. The main culprit to global warming are the business interests which control the corporations which run the industries which produce almost all the emissions. Corporations cannot afford to be overly concerned with stopping pollution. The existence of every corporation is based on its ability to make more profits than the next corporation. Carbon capturing technology means that companies would have to cut deeply into their profits to take any real steps toward stop it. Business is not about to cut its profits for anybody. Business has not cut its profits to end poverty or to stop wars. There’s no reason to expect them to do such a thing in order to halt global warming. Of course, the main question is the survival of civilisation.

A planned socialist society which has control of the means of production, distribution will assure adequate comfort for the population. The potential to create such a society exists, but that potential can be realised only if workers act to gain control of their own lives by organising, politically and industrially, for socialism. The aim of socialist production is not profits but the prosperity of the country and the people’s happiness. The capitalist practice of only seeking profit while ignoring the harm done to the people is alien to socialism. The pollution of water, food and air is caused by the greed for profit. This could be abolished if the resources of the countries of the entire planet could be organised rationally to produce a healthy environment. Climate change is the direct result of the crazy, profit-motivated system we live in. And so long as that system is allowed to continue, global warming will continue and increase.

It is not a technical problem. It is a class and political problem. While capitalism remains, the wealth produced by the labour of the workers will be squandered. All the resources for a world of abundance, without pollution, disease and squalor, exist at the present time in skill, technique and science. They are the same resources used to produce the destruction of the environment.

“We kill when we close our eyes to poverty, affliction or infamy.We kill when, because it is easier, we countenance, or pretend to approve of atrophied social, political, educational, and religious institutions, instead of resolutely combating them.”- Herman Hesse

Join the Socialist Party's fight to get rid of capitalism worldwide, as the only way to end the horrors of hunger, disease and war. 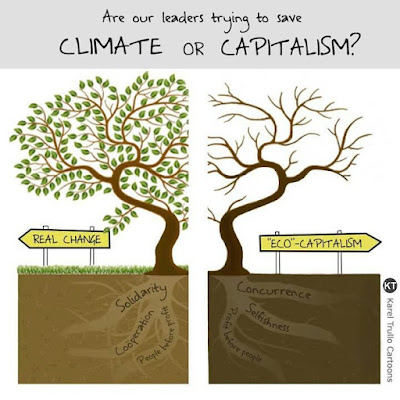