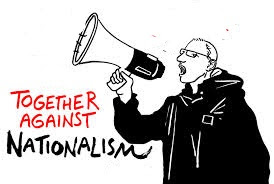 The SNP is to resume making the case for independence - with the goal of holding a referendum by the end of 2023.  It had previously paused its promotion on separatism and its indyref2 plans because of Covid.

The SNP's power-sharing deal with the Scottish Greens means the two parties form a pro-independence majority at Holyrood.

The Socialist Party, its Glasgow and Edinburgh branches and the scattered members across Scotland have not shifted their principled position advanced back in 2014. We oppose all varieties of nationalism.

When we speak of aspiring towards a cooperative commonwealth, we think of a confederation of free peoples united in one common bond - socialism. Not any parochial claim to nation-hood.

We aim at a new society without the State, without government, without classes, in which the workers shall administer the means of production and distribution for the common benefit of all. We advocate for a world where there is no longer any master, no longer any slave, for the abolition of wage slavery and the creation of the cooperative commonwealth.

A rather more ambitious and revolutionary goal than mere Holyrood rule.