Socialism the sane alternative to capitalism 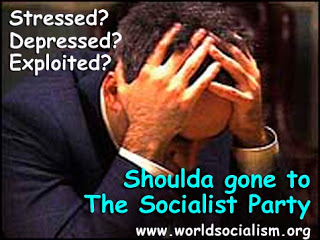 The Socialist Party has never made a  secret of the fact that we believe that whatever divisions exist between the various sections of the working class will have to be overcome in the struggle for socialism, whether they be ethnic, racial, sexual, sectarian, or anything else. We all need to understand our own class interests and recognise how they differ from the interests of the ruling class. Everywhere, the capitalists invest enormous efforts and resources in convincing us that we have more in common with them, on the basis of factors like race religion and nationality than with our fellow workers. We believe that the only real solution is the organisation of the class as a whole, fighting for its unified interests internationally.

As members of the working class, we produce all of the wealth and we get in return -- a wage. It is just enough to maintain us and enable us to breed replacements, who, in their turn, will surrender their fate and destiny for a wage. So long as capitalism lasts, there is no escape for us from the desperate need to sell ourselves. Our capacity to labour is all we have to sell, and we must sell it to the capitalists. That's how the capitalists make a profit -- by exploiting the working class. That is, the working class produces all the wealth, from which the capitalist ruling class takes the largest portion, in this process of exploitation, and, in return, gives its slaves a wage.

The fact that some workers have an iPhone, a car, and perhaps have paid off their mortgage to own their home does not alter the fact that they are exploited. Indeed, the debts usually connected with such ownership fasten the chains of wage slavery even more securely. Every aspect of capitalist society is misery -- wars for profit and plunder, race hatred dividing the working class, the slums we live in, the ruination of our environment, expensive, poor or nonexistent medical care, inadequate education, the second-class status of women, drug abuse, riots, crime -- in short, every one of those brutal, callous, cruel, and desperate things which go on every hour, every minute, in a capitalist society, grows out of exploitation.

If we want to stop the degradation, we must end exploitation. If we want to free ourselves from wage slavery, we must abolish the profit system. If we want to live decent lives of freedom and fulfilment, we must build a socialist economic democracy. The foundation on which the capitalist system of profit and poverty is built is exploitation, and its utter, final, irrevocable abolition must be our goal. We must never be sidetracked, never be drawn aside by other, seeming more attractive goals. We must never waste ourselves on reforming symptoms. The goal, the abolition of the system of wage slavery, is ALL. Then we can reap the full abundance of our social product, realizing humanity's great dream: "From each according to his ability, to each according to his need."

We want to live in a DEMOCRACY in which we, the people, have real control of all matters that affect our lives.

To accomplish that revolution, we must organise politically and we must use every forum open to us, from the soap box to the ballot box, to spread the idea of revolution. Since the means of operation of the ruling class, its private control over what in effect must be common property will be abolished, our socialist commonwealth will be a class-free society with no elite "Vanguard Party" leading us by the nose into a bureaucratic "Worker's State" so its cadres can climb on our backs like any ruling class, we must be conscious of what we are doing and where we're going, conscious to a degree never before seen in a revolution. Given the consciousness of wage slavery, given the knowledge of how to end it, our second task, organisation, will inevitably follow.

Ours is a POLITICAL PARTY with a clear platform advocating fundamental change and an alternative vision, based on grass-roots decision-making where we live and where we work. We can PEACEFULLY VOTE INTO OFFICE OUR CANDIDATES transform our economy and institutions into a true democracy - 'Of, For and By The People'- dedicated to protecting and promoting the health and well-being of all and ESTABLISH A NEW SOCIETY, replacing profit and market competition with cooperation and direct democratic ownership of all the natural resources, industries, distributions, allocations and social services. 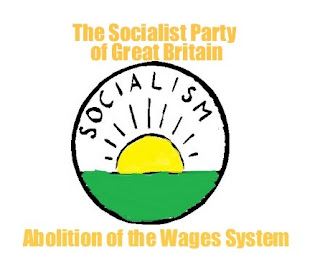