Our goal always remains the same 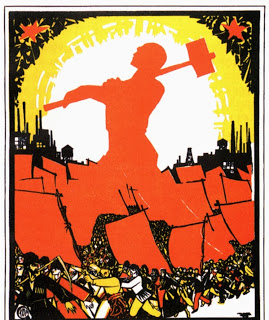 Capitalism threatens the existence of civilisation and a few say, even of mankind. The pollution of our air, soil and water. Other problems that defy capitalist solutions are wide displacement of people impoverishment of the population, mounting corruption and crime,  racism and xenophobia. All these are symptomatic of a doomed system that is taking us toward social catastrophe. They are a plain warning that we cannot prosper under capitalism. In this grave situation, the Socialist  Party's views deserve the closest attention that capitalism has outlived its usefulness to the majority. And that this obsolete system breeds ever-multiplying evils.

Capitalism is an economic system in which goods are produced to be sold at a profit. The goods are produced by the working class in industries owned by a small class of capitalist parasites. The capitalist owners of industry become the owners of the products. The workers get for their creative efforts a wage, an amount just sufficient to maintain themselves and their families.

Only when our economic life has been entirely rebuilt on a new foundation can lasting peace and economic well-being for all be achieved. Production for private profit must be replaced by production for the common good. Instead of letting a tiny useless class appropriate the lion's share of our collective product, the workers who create it must retain its full social value. Likewise, the existing despotic capitalist control of the national economy must yield to democratic management of the industries by the workers who run them. And, of course, to permit the foregoing fundamental changes, the industries and natural resources must become the social property of all the people. We must establish a new society -- a socialist society. Don't, though, get any wrong impression. We mean genuine Marxian socialism and emphatically not the counterfeits with which was the Russian and now the Chinese versions of state-capitalism.

Socialism is a democratic economic administration where there will be no political State, and no political parties either. The workers themselves will have a democratic mastery of their tools and products -- the indispensable condition of freedom in an industrial age. There can be no peace or economic security without socialism. We cannot solve our tragic problems until we get rid of their capitalist cause. Put your full influence behind the only movement that can transform this country into a model of peace, abundance, freedom and social sanity.

In a socialist society, there will be no private ownership of the land and the industries. When we say this, we are not talking about; your house, or your clothes, or your car, or any of your personal belongings. What we are talking about are the factories, communications, the mines, transport - in short, what is used in the production and distribution of goods. We say that these means of production and distribution must belong to society as a whole. There will be no wage system r. We shall produce for use, rather than for sale with a view to profit for private capitalists. We shall produce the things we want and need rather than the things for which a market exists in which the goods we produce are sold for the profit of the private owners. In a socialist society, we shall have a complete democracy - - an economic democracy. Today ownership and control of industry rest in the hands of a numerically small class (the capitalist class) who contribute nothing to production. The rest of us (the working class) own nothing but our ability to work, whether it be physical or mental, or both.

The unnecessary evil of the system of capitalism has long since outlived its usefulness. A parasitic class, which contributes nothing to human welfare exists in luxury based on the exploitation of another class that, producing everything worthwhile, yet exists in mortal fear of want and degrading misery, and now faces new horrors of environmental destruction to be added to nuclear annihilation in a third world war. In a socialist society, on the other hand, since we shall collectively own the factories and means of production, we shall have full and free access to the means of wealth production and distribution. We shall collectively produce the things we want and need for full and happy lives. It will be to the benefit of all to find new inventions, new means of production, improved means of distribution. Society as a whole will have a vital interest in providing the opportunity to each individual to find the work for which one is best suited and in which one will be happiest. There will be the fullest freedom and opportunity.

Democracy will truly be based on the broadest lines. Democracy in which the final and only power will be the great mass of our people, the useful producers, which in a socialist society will mean everybody. No more will society be split into two contending classes. We shall all be useful producers, collectively owning the means of production and distribution, collectively concerned with producing the most with the least expenditure of human labour, and collectively jealous of the rights of the individual to a full, free life of happiness.

It is within the power of working people to establish such a society as soon as they recognise the need for it and organise to establish it. The Socialist Party points the way. By supporting it at the ballot box you will say that you demand the end of capitalism and the establishment of socialism. This is the civilised way of revolution. This is the peaceful way to revolution. 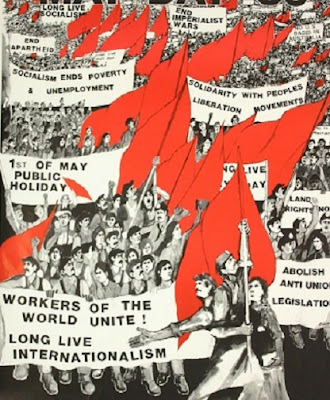