Capitalism arises out of the exchange economy, trade, buying and selling in the market. The rising merchant class spread this system over the entire globe and created the world market. Everything becomes a commodity, a useful article produced not for consumption by the producer but for sale on the market. The capitalist mode of production, based on the monopoly and private ownership of the means of production, is distinguished from all other past and future modes of production by 1) wage-labour; 2) commodity production, and 3) surplus value. Capitalism can be characterised by the fact that by and large all human needs can be bought and sold in the form of commodities. Among other commodities, the worker sells his labour-power to the boss who employs him. Now by capitalist law, whatever the worker produces belongs to the employer, who in return pays the worker only part of the value of his product in the form of wages. The value retained by the capitalist in this exploitive process is called surplus value. Under capitalism the class struggle centres on the relative portions of the value produced by the worker that goes to the worker in the form of wages and to the capitalist as surplus value.

Marxian Theory can be well compared to a triangle, with the Labour Theory of Value, the Theory of Surplus Labour, and the Materialist Conception of History as its three sides.

The whole capitalist world is in a crisis. Everywhere society is in chaos and ferment, shaking up the thinking of millions of workers and impelling them on the road of struggle against the system which oppresses them. The shibboleths of nationalism and religion are being revealed as capitalist snares to increasing thousands of workers, who are groping for a solution to the problem of existence. Socialism is our only hope. Marxism is the study of human society which offers the key to understanding the development of society and projects the direction in which it is moving – must move if it is to survive. It is the theory and practice of working-class action, of social revolution.

We have said many times that studying the past is meaningful as it enables them to better orient the work of socialists in the present and directs their hopes for the future. Socialists did not invent human aspirations for a just, egalitarian and free society; men and women have cherished this dream for a very long time. What the historical materialism of Marx and Engels did was to take these aspirations and shape them into a revolutionary goal. They learned the laws governing the evolution of class society so as to use this understanding to achieve the better society towards which mankind works towards. Socialism is a word that came into general use in the third decade of the 19th century, and it has always been understood to signify opposition to capitalism. The adjective "scientific" is used to distinguish this socialism from the schemes of these Utopians and idealists, socialists who based their plans for a new state of affairs upon abstract principles, rather than upon the logic of the historical evolution of society resulting from the friction conflict between rival classes. Vain are the hopes of industrial peace. Like snow upon the mountainside, they will vanish before the sun of economic heat. In every country, capitalism begets its gravediggers. In its endeavour to increase its profits, it will force the workers to take up a militant attitude upon the industrial, political and educational fields, and progress will be accelerated until the workers of the world will unite and their emancipation be accomplished.

Marxist socialists insist on democracy - real democracy - in the transition to socialism and the full participation of working people. If any government remain in the hands of the few, they will inevitably use and abuse their position (and incidentally create an ideology to justify it) to further their own elite interests against those of the class they are supposed to represent. Marxist socialists, beginning with Marx and Engels have always supported democracy as against any form of despotism. Thus they have supported republicanism against monarchism, capitalist democracy against capitalist dictatorship. But they always recognise the limitations of these.

In the past internationalism seemed a utopian ideal. Now for the workers around the world, it is a vital economic necessity. 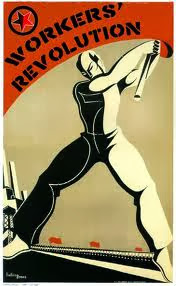