The establishment of a cooperative commonwealth society 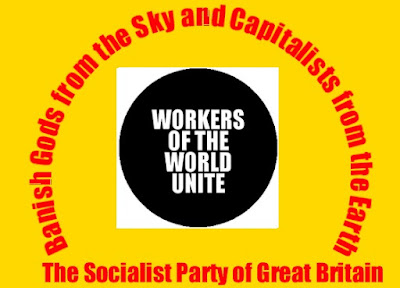 Socialists assert the equality of sex and race. We say, all people are born socially equal, and accordingly apply all our efforts towards the abolition of the existing social regime. Capitalism is based on the property-owing class of those to whom belong the means of production of the whole world. They may compete among themselves but are also linked together by connections of business and interest and by political solidarity against the working people. Socialism is based on the workers of the whole world. We are the real living force of the new society that must replace capitalism, but we continue to be tricked by ignorant or treacherous leaders. In a capitalist society, despite all the changes which may have occurred, the state ultimately remains the centre of decision serving the capitalists.

Recognising this, the Socialist Party declares itself to be one with the class-conscious workers of all other countries. The Socialist Party, therefore, does not fight for new class privileges and class rights, but for the abolition of class rule and of classes themselves, for equal rights and equal obligations for all, without distinction of gender, colour or place of birth. Starting from these views, it fights not only the exploitation and oppression of wage earners in society today, but every manner of exploitation and oppression.

Labour is robbed of the wealth it produces. The fruits of our cooperative labour are appropriated by the owners of the means of production. Human power and natural forces are wasted by this system, which makes “profit” the only object in business. Ignorance and misery, with all concomitant evils, are perpetuated by this system, which makes human labour something to be bought in the open market, and places no real value on human life. Science and invention are diverted from their humane purposes and made instruments for the enslavement of men, women and children.

We, therefore, call upon all working people to put an end to the present barbarous struggle, by the abolition of capitalism, the restoration of the land, and of all the means of production, transportation, and distribution, to the people as a collective body, and the substitution of the cooperative commonwealth for the present state of unplanned production, industrial war, and social disorder, to make democracy, “the rule of the people,” a truth by ending the economic subjugation of the overwhelmingly great majority of the people.

The Socialist Party reaffirms its adherence to the principles of world socialism and declares its aim to be the organisation of the working class into a political party, with the object of conquering the powers of government and using them for the purpose of transforming the present system of private ownership of the means of production and distribution into common ownership by the entire people.

Private ownership of the means of production and distribution is responsible for the ever-increasing uncertainty of livelihood and the poverty and misery of the workers, and it divides society into two hostile classes — the capitalists and wage workers. The struggle is now between the capitalist class and the working class. The possession of the means of livelihood givers the capitalists the control of the government, the press, the pulpit, and schools, and enables them to reduce the working people to a state of intellectual, physical, and social inferiority, political subservience, and virtual slavery. The economic interests of the capitalist class dominate our entire social system; the lives of the working class are recklessly sacrificed for profit, wars are fomented between nations, indiscriminate slaughter is encouraged, and the destruction of whole races is sanctioned in order that the capitalists may extend their commercial dominion abroad and enhance their supremacy at home. But the same economic causes which developed capitalism are leading to socialism, which will abolish both the capitalist class and the class of wage workers. And the active force in bringing about this new and higher order of society is the working class. All other parties which do not stand for the complete overthrow of the capitalist system of production, are alike political representatives of the capitalist class.

We call the attention of the trade unionists to the fact that the class struggle so nobly waged by the trade unions, while it may result in lessening the exploitation of labour, can never abolish that exploitation. The exploitation of labour will only come to an end when society takes possession of all the means of production for the benefit of all the people. It is the duty of every trade unionist to realise the necessity of independent political action on socialist lines, to join the Socialist Party and assist in building upon a strong political movement of the wage-working class whose aim and object must be the abolition of wage slavery and the establishment of a cooperative commonwealth society, based on the common ownership of all the means of production and distribution.