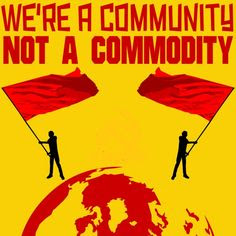 The capitalist economy is in an endless search for profit, seeking to turn everything into a commodity to sell. Only in this way can capital accumulation continuously expand, effectively driven by the competition between businesses for ever-larger market share.

Capitalism cannot halt its march to destruction. Without a doubt, governments don't want to accuse the big polluters of the environment and prefer to present them with the friendly image of good corporate citizens. Capitalism’s drive to expand, private ownership of natural resources, production for profit rather than the common good, the inability to plan socially, and the alienation of humanity from nature – make it inherently ecologically destructive. Relentless cost-cutting and aggressive expansion in the market to improve profit margins is the core dogma of the religion of capitalism.

The environmental crisis is not a climate crisis but a crisis of the capitalist mode of production. Global warming is the failure of capitalist planning. The apparent insolubility of the climate crisis through conference treaties is a direct result of capitalist competition between corporations and countries. Ecological groups put their hopes in direct-action tactics as an alternative to lobbying. While deserving respect for their distrust of the State such direct action might appear militant but it is not sufficiently radical enough with its limited demands, failing to confront the ultimate source of the problem - capitalism - nor offer solutions to how to dissolve capitalism. Direct actions are intended to spread awareness of the problem, rather than confront its cause. Only in a socialist society can the ecological problems capitalism creates be solved.

By releasing us from the tyranny of private ownership of the means of production, socialism, ends this morbid tendency of cancerous growth. Socialism replaces capitalist profit with production for real human needs, resulting in a meaningful transformation of how we live and work and in ways that are fundamentally democratic and fully participatory. Despite some well-intentioned critique of capitalism that points to the insanity of unplanned, undemocratic production, the environmentalist movement has made little attempt to develop a rational, democratically controlled economy providing for the needs of the world’s population.

The superficial cosmetic changes COP26 propose does nothing to alter the basic functioning of global capitalism. Reformist groups worldwide have been utterly incapable of offering an alternative to capitalism and disappointingly our socialist ideas have so far not resonated on a large scale.

The climate crisis offers an opportunity for profound change. The inability of capitalism to manage the economy sustainably or in the general interest has never been clearer, nor has the relevance and necessity of socialism. People can now potentially envision a different kind of community beyond capitalism that is egalitarian and environmentally sustainable. The World Socialist Movement argue that there is no road to prosperity for all of the world without the overthrow of capitalism.