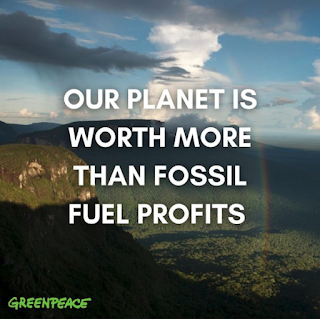 Capitalism is an enormously wasteful system of production, which is geared towards competition in the market, and to making profits. Corporations engage in practices that destroy the environment as they need to make the maximum profit possible. Apart from the legal obligation to do so on many companies, the capitalist system enforces the imperative that corporations must grow or die.  We have witnessed decades of climate conferences passing pious resolutions to halt global warming and environmental destruction yet both remain serious issues requiring urgent action because capitalist production is for profit and capitalists will not reduce carbon emissions if that reduces profits. The truth is that only through abolishing capitalism and building a society that produces for human needs instead of profit, does humanity have any chance of thriving. Only in a society where the means of production are social property and production is for human need, where states and borders are abolished and control is by a system of working people themselves can we begin to reverse the terrible damage which capitalism has inflicted on the planet.

Capitalism is an economic structure based on private property, wage labour and production for profit that has become a fetter preventing humanity from addressing the urgent problems facing the whole planet. Capitalism's relentless pursuit of profit at the expense of the wider welfare of people and their natural surroundings. Things are only going to get worse as long as capitalism carries on.  The ruling will never find answers to the ills of this profit-driven system. And as well-intentioned as many of the campaigners on the streets may be, their whole strategy comes down to lobbying politicians to repair the unfixable. The protesters’ demands fall upon deaf ears because their appeals run counter to  the basic laws of the capitalist system itself, which is to make a profit

Some of the more radical elements demand that the government legislate the Green New Deal, government investment in green businesses, incentives for renewable energy, and tax breaks for those who engage in carbon off-setting and trading carbon credits on the stock market. Even if capitalism could somehow be successfully reformed to curb climate change, the decision would have to be made globally and agreed by all countries to have any effect – something that individual nations have not been able to fully accomplish domestically, much less regards rival competing national economies.

Furthermore, as Michael Moore’s movie “Planet of the Humans” points out, many of the solutions favoured by the green movement involve environmental destruction and pollution themselves and much of the alternative ‘green’ technologies require scarce resources and are manufactured conventionally using methods that contribute to global warming. Unless the fact that capitalism requires continual growth and each company and country is in competition to gain a competitive advantage over its rivals is accepted as the chief cause of global warming, then environmentalists are chasing their own tails with lobbying governments.

The planet will not be saved without getting rid of capitalism. No meaningful changes under capitalism can be achieved which will curb climate change. It cannot be stated often enough that capitalism is only concerned with short term profits.  For CEOs, it’s more important to accumulate capital and make profits than for children to grow up in a healthy world.

The World Socialist Movement insists that only a world society is based on the production of human needs instead of profit. Humanity lives in a relationship with nature, and capitalism threatens that existence. Attempting to reform elements of capitalism while production for profit remains can only lead to failure. We need to start producing for human needs in a globally planned way. This means the overthrow of this insane economic system.