History is made by people struggling to put society’s resources at the disposal of the majority of the people. Private ownership is the foundation upon which the entire edifice of exploitation, sexual oppression,  corruption, race hate,  criminality, and warfare making up modern civilisation rests.  Lawmakers and politicians have striven down the ages to ensure working peoples’ lives suffer its murderous consequences. Above all else, we must put an end to private ownership.

Who are our enemies? Who are our friends? To begin to understand the first step is to distinguish between two antagonistic classes: the capitalist class and the working class.

The capitalist class owns and controls the means of production, distribution and communication. The working class owns none of these, and therefore workers must sell their labour-power to the capitalist for wages in order to live. The worker creates a product of value, part of which is returned to him as wage, and the rest of which is taken from him by the capitalists as profit. Thus is created the basic antagonistic contradiction between worker and capitalist, since the interest of one is, and has to be, directly opposed to the interest of the other. This most fundamental of contradictions will not end until capitalism with its private ownership and/or control of the means of production is itself ended and replaced with socialism.

People have been taught to look upon the State as a “neutral arbiter,” standing above classes and mediating disputes between them. In reality, government institutions  (courts, prisons, police forces, the military) are dominated by representatives of the capitalist class and ensure their rule.

In a socialist society, all means of production will be common property. There will be no classes and no class struggle. The consequences of class-divided society – racism, national chauvinism, male supremacy will all have disappeared. There will be no wars, no armies, and no need for weapons of war. Socialism will be a life of material and cultural abundance.

The aim of the Socialist Party is to build a socialist society. will be a class-free society, in which all the means of producing wealth are owned in common. Instead of being divided into workers and employers, rich and poor, society will be an association of free people, all making their special contributions to the wellbeing of society, which in return will supply them with what they need in order to live full and happy lives. Such a society can be summed up in the slogan: “From each according to his ability, to each according to his needs.” For this to be possible, socialism must be based on abundance. Production will be organised in such a way that there is plenty of everything for everybody: not only food, houses and so on, to satisfy material needs; but also leisure and recreation.

Work, instead of being simply a means of earning a living, will have become the natural expression of peoples’ lives, freely given according to their abilities. Moreover, the nature of work will itself have changed. Through the development of technology, much of its drudgery will disappear and every man and woman will develop their mental and physical capacities to the full.

Because it will be a community of plenty, where there is enough for all and therefore no advantage can be obtained by theft or other forms of crime, all need for courts of justice and police will have disappeared.

Socialism will be worldwide. It is not something that can be fully completed in one country, isolated from the rest of the world. On the contrary, it must eventually embrace all the peoples of the world, and in so doing it will put an end to nationalism and war. Because no wars can take place in a truly global society there will be no need for the military.

The State will itself disappear. Instead of one section of society ruling and oppressing another, men and women will live together in society without fear and compulsion. Thus, for the first time, mankind, united in a worldwide family of nations, will be free to devote all its creative energies. The working class, being itself the great majority of the people, will end the exploitation of man by man, and lay the foundations for a socialist society. 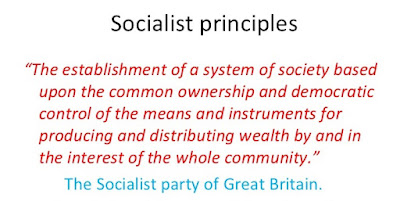