This World or None 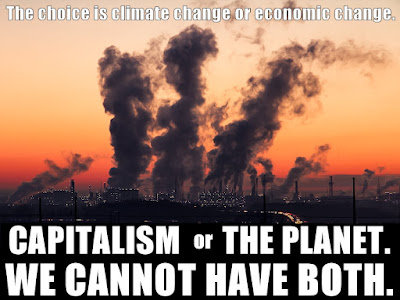 The previous  COPs have failed to make any significant progress and were mere forums for empty rhetoric, intended to put over a public relations gloss on the reality that things are getting worse. Although it is accepted that the problems are global and that global consensus is required for action on a global scale what dooms them to failure is the fact that they take place in a world that is divided into rival capitalist nation-states which are in economic competition with each other. This makes agreement almost impossible and rules out effective action. A sane society would simply consider all the options available and then follow discussions and debate democratic decisions on the course of actions the world takes to do what was necessary to achieve the solutions. This rational procedure is impossible under capitalism because before we can work together we must first create a society in which we can all co-operate with one another.

The idea of a zero growth, a steady-state sustainable society is not new and has been proposed by many in the environmentalist movement. But their fatal flaw is that they stand for the continuation of the market system, instead of a society based on voluntary co-operation where all goods and services are produced directly for needs with free access.

The green activists aim to retain the market system in which goods are produced for sale at a profit. This must mean the continuation of the capitalist system which is the cause of the problems of climate change in the first place. Environment campaigners have never been able to answer the question which is how it can achieve zero growth whilst retaining a market system that includes an irresistible, built-in pressure to increase sales for profit and where if sales collapse, society tends to break down in recession, unemployment and financial crisis. The only way in which the aims of the green movement could be achieved is through socialism.

When we speak of a stable, sustainable society we do not mean a static society in which there is no development. On the contrary, when liberated from the profit motive of corporate research and the military machines of capitalist states, science will flourish and will serve the interests of all people. Nor do we suggest that new science will not result in new technology. The urgent need for care of the environment will be just one field where research and new technology would be given priority. However, we should also recognise that the abolition of all the economic constraints imposed by the market system on the use of labour will bring enormously increased powers of production. In socialism, it will be possible to produce vast amounts of goods. It is in the light of this fact that people in socialism would have to ask if it makes sense to go on and on producing whilst using up the planet's resources or whether there should be voluntary limits to consumption and an eventual scaling down of productive activity.

There is an assumption in our society that increased ownership and consumption of goods leads to increased happiness and should therefore be a central driver in our lives. But whilst we all need to live to a decent standard of comfort and enjoyment the values of our acquisitive society arise from insecurity and competition. We substitute personal ownership for better human relationships which would express our real needs as social individuals. Our happiness, or otherwise, arises from how we relate to people not from how we relate to material objects as owners.

So whilst we do not presume to lay down in advance what decisions will be made in socialism we can set out a possible way of achieving an eventual zero-growth society operating in a stable and ecologically benign way. This could be achieved in three main phases.

First, there would have to be emergency action to relieve the worst problems of food shortages, health care and housing which affect billions of people throughout the world.

Secondly, longer-term action to construct means of production and infrastructures such as transport systems for the supply of permanent housing and durable consumption goods. These could be designed in line with conservation principles, which means they would be made to last for a long time, using materials that where possible could be re-cycled and would require minimum maintenance.

Thirdly, with these objectives achieved there could be an eventual fall in production, and society could move into a stable mode. This would achieve a rhythm of daily production in line with daily needs with no significant growth. On this basis, the world community could reconcile two great needs, the need to live in material well being whilst looking after the planet which is our shared home in space.

Although capitalist society appears to place great importance on its material wealth, it sometimes has no hesitation in destroying it in vast quantities and in ways that have no thought for the loss of human life involved. For example, the 20th Century was one such story of continuous destruction. We can mention the misuse and waste of energy in armaments production, and where more energy has been used to fuel wars around the world. These have destroyed vast amounts of useful structures such as factories, roads, bridges, railways, vehicles, aircraft, and millions of tonnes of shipping.

Some applications of labour have to be constant, for example, in food production. With food, production and consumption are more or less simultaneous. But with housing, infrastructures and durable means of production, the products of one generation, with subsequent maintenance, can be used by many succeeding generations. In socialism, this could mean that the initial work required to solve the problems of capitalism would not have to go on and on. Given that the work was in accordance with conservation principles, that population levels become close to stable, and that communities were content to place voluntary limits to consumption, then there could be an eventual fall in production with all the benefits this would bring to care of the environment.

Seen solely from a technical point of view there are no doubt many ways in which the damage caused by pollution could be reduced with different uses of labour. But before any of these can become real options on which communities can freely make democratic decisions, labour itself must first be liberated. Labour must enjoy its own freedom outside the present enclosed system of commodity exchange in which it is confined to its function of profit-making and the accumulation of capital. Not even in the most optimistic dreams of defenders of the free market will the accumulation of capital ever be made to equal care of the environment.

In the meantime, the play-acting at COP 26 in Glasgow will present itself as farce, a genuine tragedy in which we must cease being a mere audience of on-lookers. How much more time-wasting and failure must we see before we accept that capitalist politicians are incompetent to deal with the problem. The real powers of action are with the great majority of people. This will be when we decide to create a society in which we will be free to co-operate and to use all our great reserves of energy and ingenuity for our needs. Without a doubt, this includes the urgent need to stop the despoliation of our planet.

Breakdown at The Hague(3) (marxists.org)