The Importance of Democracy 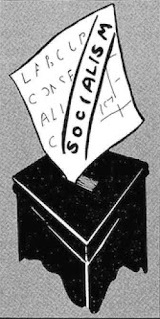 The Socialist Party is the only party that is or can be truly representative of the interests of the working class, the only class essential to society and the class that is destined ultimately to succeed to political power, “not for the purpose of governing men,” in the words of Engels, but “to administer things.”

The owning class is necessarily the ruling class. It dictates legislation and in case of doubt or controversy has it construed to its own interest. The present forms of government are based solely upon private property of the means of production and are wholly coercive. The only vital function of the present government is to keep the exploited class in subjection by their exploiters. Parliaments and legislatures, as a rule, act wholly in the interest of the ruling capitalist class. Courts of justice, so-called, decided cases of importance not upon their merit, but in the interest of the ruling class. Marx was right in declaring that the economic basis of society determines the character of all social institutions and the institutions noted therein are modified in proportion only as this basis changes.

The Socialist Party is a revolutionary party as its basic demand is the common ownership of the means of production and distribution and the operation of all industries in the interest of all the people. This will mean an economic democracy and upon this vital principle, the Socialist Party differs diametrically from every other party.

Between private ownership and common ownership, there can be no compromise. Oil and water don’t mix. One produces for profit, the other for use. Socialism secures for every man and woman their full product of his or her toil, abolish class rule, wipe out all class distinction, and makes this earth for the first time a habitable place.

The Socialist Party seeks to organise the workers of the world, irrespective of nationality, into one unified PARTY OF LABOUR. Our aim is socialism. Our method is the political organisation at the ballot box to secure the election of representatives of socialist principles to all the elective governing public bodies. The Socialist Party pledges itself to pursue, unfalteringly and undeviating, its great object – common ownership of the means of producing and distributing all wealth. In other words, a world socialist cooperative commonwealth.

Socialists assert that production should be for use and not for sale or profit, thus doing away with exploitation along with a vast amount of unproductive labour and an immense number of useless and harmful occupations. The cooperative commonwealth is their goal. No person has the privilege to become a Socialist Party member without understanding the subject. Equally, no one has the right to criticise socialism without first studying it. The Socialist Party demands that the world’s wealth be repossessed from the control of private interests and turned over to the people to be administered for the benefit of all.

The supreme task of socialists of all the world is to dedicate ourselves to the imperishable principles of international socialism; to strengthen the bonds of working-class solidarity; to deepen the traits of conscious internationalism. The Socialist Party extend to the socialists of all the world our greetings and hail them all our brothers, sisters and our comrades. A new page of human history is to be written, the message social democracy, internationalism, peace and prosperity. The Socialist Party will continue the class-conscious political battle of labour. We are working with all effort for the cooperative commonwealth. We are all cosmopolitans, endorsing in the fullest sense international revolutionary socialism,  engaged in the overthrow of capitalism.

In its struggle for a new society, the Socialist Party seeks to attain its objectives by peaceful means. So long as the ballot box, the right of assembly, free media and civil liberties are maintained, appeals to force and violence will not attract working people. Coercion is not the weapon of socialism but of the short-sighted representatives of the ruling classes who stupidly believe that social movements and ideals can be destroyed by repression. The Socialist Party depends upon the education and the organisation of the working class. If capitalism can be superseded by a majority vote, the Socialist Party will rejoice. If the capitalist system should collapse in general chaos and confusion, which cannot permit orderly procedure, the Socialist Party, will not shrink from the responsibility of organising and maintaining true democracy as a worthy means to progress. 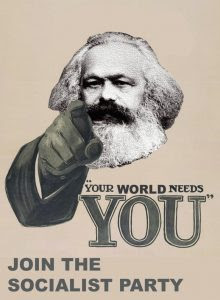