The ruling class pursue their own interests that are detrimental to the public well-being. They get away with this by falsely convincing working people that they share common interests with their employers. Working people are told ad nauseam that they are under constant threat from all manner of enemies and need to be protected. It’s a protection racket.

The reality of capitalism is that social problems are endemic to the system. They flow directly from its basis and in one form or another they will endure for as long as capitalism lasts. The reformist case is that capitalism need not be abolished (although some reformists profess this to be their eventual, distant, objective) just yet because it can be modified so as to be acceptable to people. All the evidence destroys this myth and points to the conclusion that socialism cannot be delayed. It points to the conclusion that reformism is not only futile but reactionary, since it aims to postpone socialism when this in fact means the abandonment of the aim of social revolution and therefore the continuation of capitalism with all the problems which so concern the reformists.We know that organisations that promises to run capitalism  in the interests of the working class while they reformed it out of existence, are attempting the impossible.  Many working people who  put their faith in such delusions are disillusioned.  Capitalism is still around in its repressive, destructive way. The problems of capitalism persist and prevail, indeed in many cases they can be said to worsen. We face devastating destruction of the environment with climate change. This is also the nuclear age, when war promises to be an instant, all-obliterating matter from which settled human life may not be able to recover. World-wide, hunger inflicts misery and suffering  tens of millions of people. In many countries there are refugees and migrants, homeless through the conflicts of capitalism and the system’s artificial, inhuman national barriers. Poverty in its simplest form, in which workers struggle day in and day out to make ends meet and to gain access to the most unremarkable of life’s needs, persists.

War, they say, can be eliminated by the capitalist powers agreeing not to behave like capitalist powers. The same can be said about nuclear weapons; the mighty states which have made them should simply agree that it has all been a waste of time and throw them away. Famine can be solved through charity, poverty by an adjustment of state benefits. And so on. A myth which needs to be dispelled is that the state—the government, the law, the judges, the police —is neutral. No government can make capitalism serve the interest of the wage and salary earning majority. The state must be the political defender of the ruling class. In any struggle between robbers and robbed the Socialist Party is unequivocally on the side of the robbed. In the class war no worker and no political party can be neutral. But in expressing solidarity with workers in struggle, we point out that our sympathy and their temporary gains will be meaningless unless victory involves winning the war and not just one battle. To win the class war workers must organise as a class for the conquest of the earth and all its resources. No lesser victory is worth settling for.

Economics under capitalism are concerned first and foremost with price and profit. Production is regarded as “uneconomic” when investment of capital shows little or no prospect of leading to profit for the investor. Being “uneconomic” is not at all the same as being “useless”. For example, dairy farming is currently “uneconomic” because more milk is produced than can be sold profitably. However, milk is desperately needed by the  children enduring malnutrition-caused diseases every single day.

In our present-day society—capitalism—the working class, the overwhelming majority, have no other way to scratch a living than to sell their physical and mental energies (labour power). Capital and labour thus face each other as buyers and sellers, those interests a priori must be antagonistic. Another angle on this conflict is to see it as a struggle over the division of the product of labour. The higher the share taken by the non-producing capitalists, the less is the portion left for the producers of the whole wealth of society, the working class.

We can concede that a capitalist investor is occasionally sometimes taking a calculated risk, with heavy losses on occasions taking the place of spectacular profits. But what have the capitalists as a class contributed to the actual productive process? In both cases, nothing. As for the stresses and strains of entrepreneurship, where they represent a real contribution they are now almost exclusively performed by salaried employees, members of the working class. All things being equal, the smaller the share of the total wealth accruing to the workers the greater the profits of the capitalist class. In some cases, by paying somewhat higher wages an employer may attract better workmen or women and so increase profits. Also, although it is difficult to express this in figures, a happier workforce on pay somewhat above the going rate may perform better and again produce more profits. Perhaps a better way of putting it would be “a desire to maximise profits”, but this is pretty well the same as minimising wages relative to profits.

The Socialist Party stands for socialism and for that alone and to insist that the revolution is an immediate possibility; the working class can and must understand socialism and opt for it. That is the continuing task of socialists everywhere and will carry on with it until socialism becomes reality.

When that happens, the role of the Socialist Party is at an end. A class-free, united society will have no need for any expression of class-divided society; there will be no privileges, no coercive machinery, no medium through which ownership on the one hand, and denial of access on the other, are expressed. Neither will there be political parties, which exist as proponents of class interests. The socialist parties alone represent the interests of the working class; when that class is abolished with the establishment of socialism the socialist parties, along with all others, will cease to exist. 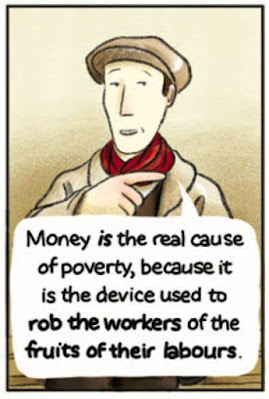