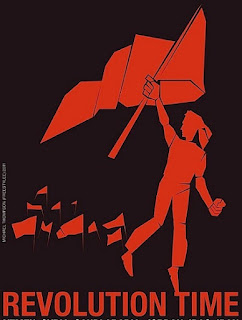 Revolution approaches. We must stand in solidarity  for freedom and happiness.

To want bosses and at the same time to want to be free is to seek the impossible. It is necessary to choose once and, for all, between two things, either to be free, completely free, rejecting bosses, or to be enslaved and perpetuating the power of the boss over men and women.  The boss or politician is necessary only under a system of economic inequality. To talk of bosses between equals is a contradiction, unless we speak of equals in servitude, brothers and sisters in chains, as we workers are now.

No one is going to hand workers socialism on a silver platter...least of all a handful of philanthropic oligarchs. When workers vote for a strike they know what they are in for: loss of wages, picketing in all weather and at all hours, increasing debt at home. The bosses lust for mountains of profit to increase their power and domination over this country and the whole world. It has nothing to do with the necessities of life. The workers strike to get a living wage, for decent hours and conditions. THESE ARE NECESSITIES OF LIFE.

Parasitic ruling classes have always spread the idea that they are indispensable. The more useless they become, the more insistently they try to impress their importance upon workers’ minds. The capitalists, contend, in order to justify their existence, that they alone are competent to rule the state and control industry. The opposite is true. The capitalist class  no longer performs any essential functions in modern society, any more than the appendix performs any useful function in the human body. Today the capitalist, like a diseased appendix, imperils the very life of humanity. This source of infection must be removed before society can regain its health – and only the revolutionary working class can perform that surgical operation.

Society does not depend today upon the capitalist exploiters but upon the working people, they oppress and exploit. If these workers lay down their tools and folder arms  then production stops. But if every stockholder did nothing, the workers in the manufacturing plants could continue to turn out products for everyone to use.

The worker who now operates a lathe can direct a machine shop tomorrow and an entire industry the day after. It can be done collectively by organised workers in socialism, who will own, organise and operate industry by means of democratic councils. They will then produce not for the enrichment of a few but for the enjoyment of all. The capitalist rulers try in every way to keep workers from gaining this understanding.

We workers are robbed as producers, robbed of the surplus labour, of the surplus value which the capitalist divide among themselves as profits, rent, interest. The bosses want “cheap government” and view the state bureaucracy as gangsters who rob the robbers with a protection racket called taxation. They want the support of the working class to  curtail its expenses by attempting to shift the tax burden to the other sections of their class.  In this struggle to hold up profits each section of the capitalists wants the other section to pay the tax, yet each section wants to dictate to the political office boys what to do. The financiers desire to push the burden on the shoulders of the industrialists and the industrialists would like to place the taxes on the landlords, who all hope to shift it to the small capitalist. When the capitalist thieves fight each other they want us to help them. We workers would be more than foolish to help one section of the capitalist gang against another section on the question of spending budgets war, taxes or any other struggle. The capitalist bandits as a whole rob the workers and feud over the division of the spoils. It is not our problem. Rather, our problem is to expropriate the expropriators. Our main struggle must be at the point of production.