A socialist planet for all

Fellow-workers, we are out to end this man-made hell on earth. We can show you that the greatest of our social evils are directly traceable to the fundamental wrong of stealing from you the product of your work. We ask you to unite with us for the overthrow of capitalism and the establishment of the socialist cooperative commonwealth.

A careful reading of our Declaration of Principles will at once clearly and unmistakably show both the strength and the simplicity of the socialist position. Not one of the principles on which that position stands has been, or can be, refuted.

The Labour Party and their left-wing hangers-on have never taught anything but the pseudo-socialism of the reformist school. The idea that anyone could possibly obtain the most elementary knowledge of socialism from these parties is manifestly absurd. The schools of reformist thought may very well be good training-grounds for budding bureaucrats, Labour decoys and prospective  Cabinet Ministers but, except altogether in a negative manner, they are unthinkable as doing anything in the way of making Socialists. As a matter of fact, the confusion and mental decrepitude engendered by their teachings have done more to retard the progress of Socialism than all the efforts of the orthodox political parties.

One of the tragedies of misplaced enthusiasm and wasted effort by our fellow-workers has been the campaign for nationalisation. The idea gthat nationalisation would be good for the workers and a good vote-catcher for Labour Party candidates and the idea that nationalisation is socialism and would solve all problems is prevalent among the Left. It was supposed by Corbynites to be based on the principle of “public service” not profit. We have seen in the past the nationalised undertakings in operation under laws passed by the Labour Government. We see them being run on methods hardly distinguishable from those of any large private company. Disappointed about this, some workers have thought that the trouble is due to having the wrong people in control of the nationalised industries, not recognising that whoever is in control face the same obligation to make a profit.


No other method is possible under capitalism: the assumed alternative of running the industry at continuous heavy losses would merely lead to a demand either for reorganisation, so that profit would be made or a demand for selling back to private companies. Going in for nationalisation, in the belief that it would be a step to Socialism, was a false move. It has not achieved anything. Nationalisation, which was once the great plank of the Labour Party, is now a heap of sawdust which was quietly swept away. It never had the support of the Socialist Party.

When we, as socialists, examine the records of government by all the parties, separately and in coalitions, we are reinforced in our conviction that the only solution is the one sneered at and rejected the “dream of a society altogether free from conflict and friction”—a socialist world. Socialism alone can foster the harmonious and brotherly behaviour of mankind which lies dormant in all of us, awaiting the freedom of expression and fulfillment that will accrue once the revolution has been accomplished. We call on our fellow members of the working class to stop voting for the continuity of capitalism, even though we acknowledge fully It is a hard task to educate workers away from support of capitalism and reform of capitalism, over to an understanding of socialism. When they can be got to consider the question they all will see that nationalisation leads nowhere and that socialism alone offers them the means to use the land and industry, without financial hindrance, to supply the needs of the human race, and at the same time enable them to enjoy, along with everyone else, all the amenities social production in field and factory can provide. 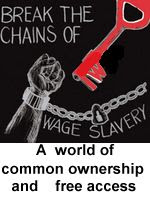