Put not your trust in leaders 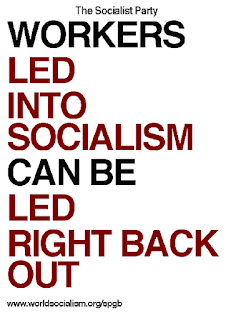 It is not theory but reality that is the test of truth. Confusion is becoming worse confounded as a result of changing names, whilst allowing the substance of things to remain the same. By giving things names that denote their real meaning we quicken the understanding of our fellow-workers. We explain the situation as it really is and do not get entangled in ruling class verbiage. Our appeal is to the working class, the propertyless class. They comprehend best when we express ourselves in terms similar to those they use when on the job. The be-all and end-all of propaganda is to translate into everyday language the economics of the present system and the necessity for socialism. Socialists tries to get his or her colleagues to perceive that until the means of wealth production are made common property and a system of production solely for use is established, their lot in life will be that of wage-slaves.

The source of all surplus value is living labour. The capitalist instinctively realises this. The worker is the goose that lays the golden eggs. The capitalist class use the means of wealth production, the land, factories, railways, mines, etc. us a means of constraining the real thing—the slave. The slave is the only form of property that brings to the owner a revenue—something for nothing. When the ruling class quarrel amongst themselves, the wage slaves are torn from productive industry and made to engage in war, the industry of destruction. The workers in different camps are pitted against one another. They re-echo their masters’ slogans of democracy and liberty, but no matter what the result of the conflict may be, the rulers will never sacrifice their right to appropriate unto themselves all the worker produces over and above what is necessary to sustain him. What the capitalist means by liberty and democracy is the full and free opportunity to exploit labour for profit, and those who stand for less than the abolition of the wages system are on the side of labour’s enemies, though they may know it not.

The reforms of the reformers never deal with the source of the trouble: the wealth of the ruling class has not been made less as a result of the activities of those who believe in the inevitability of gradualness, neither has the relative position of master and slave changed. The wealth of the ruling class in normal times steadily increases, and that of the worker becomes relatively less.

The Socialist Party calls upon the workers themselves to put an end to the present deplorable state of things. Instead of relying upon others, we all must tackle the job together. There is nothing to prevent the working class democratically getting hold of the political machinery through the vote. Against the united advance of the working class the capitalist class are absolutely helpless. The interests of the working class are identical on tho class field—the political field. The issue between the wage slaves and their masters is one of ownership.

Until the means of life are made common property, no power ou earth can take labour power out of the category of commodities: there it is fixed by the economic laws of capitalism, therefore the worker must establish socialism or perish in capitalist slavery.
The serious conservatism from which the workers suffer is their habit of clinging to capitalism when Socialism is within their reach if they would have it.  There will be many self-styled saviours of the working class seeking votes and support, shouting urgently for speedy action while they are climbing up the career ladder and then, when they have arrived, imploring the workers to go slow and be content with capitalism. These men are the successors of a long line stretching back to the earliest days of the reformist movement. No matter what their good intentions may be, they will not and cannot do anything for the emancipation of the working class.

Workers poor are poor because the means of production and distribution are owned and controlled by the capitalist class instead of by the whole community, and consequently so is the wealth produced by the workers. This is the starting point from which the working class should view all schemes for improving capitalism. It is naturally not the starting point for the defenders of capitalism who take private ownership for granted and leave out any possibility of ending it. As a result, their attempts to find out why poverty exist, and how to end it are sterile and fruitless. The workers are poor because over and above the period of their work in which they are producing the equivalent of their wages they are working further to produce surplus value (rent, interest and profit) for the propertied class. They suffer unemployment because the capitalists, in the limitless search for profits and accumulation of capital which the system imposes on each of them if they are to survive in the competitive struggle, are always seeking new management methods and new technology which will save labour and cheapen the product the capitalist owns and must sell. Every wage increase the workers are able to obtain when conditions favour their struggle gives the employers a new incentive to install labour-displacing machinery, add to the army of the unemployed, and thus create conditions in which the existence of large unemployment tends again to depress wages.  Capitalism, except in war, can never guarantee continued full production. Periodically the flood of goods on the market will come up against the problem of finding buyers who can pay the price necessary to provide the profit which alone is the aim of capitalist production. While we are not in a position to prophecy exactly when the next slump and trade crisis will come, come it will despite all the plans and conferences of capitalist governments and Labour Parties. The only remedy for the poverty and crises of capitalism is to abolish capitalism. 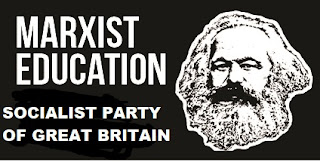