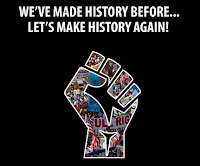 The only logical position in the political world that a genuinely socialist party can take up is that of opposition to all other parties.  We must be in opposition to all other political parties and be distinct from other “Labour" or "Socialist" bodies. For any party that claims the support of the working- class is acting as their enemy if it does so on any other ground than that of a clear recognition of the class war that is being waged. There must be the complete overthrow of the capitalist system of private ownership of the means of life, with its method of production for profit, a goal attained by the capture of political power by class-conscious workers, so that by its control they can substitute co-operative production for use for production for profit. By this change in the basis of society, the workers will have ended the power by which they are kept in their present condition of wage-slavery. Any party that deludes our fellow-workers into believing that anything short of the establishment of the socialist commonwealth will be effectively assisting to perpetuate the capitalist system, with all its infamies. The only principle on which a working-class party can progress is on the lines of the class war, and strenuous opposition to any party not based on those lines. Thus The Socialist Party of Great Britain resolutely opposes Tory, Labour, LibDems, and nationalist as well as all those professing to be “socialists”, who, directly or indirectly, support capitalist politics. The Socialist Party call upon those of the working-class who desire emancipation to enrol themselves in our organisation, to prosecute the class war and the social revolution to a successful resolution.

For many on the Left, the Socialist Party's conception of revolution lacks credibility and that they claim to possess a theory of revolution that does not expect people to wait for the majority necessary to “enact” socialism before doing something about their immediate problems. Some perceive a problem that they can't see how workers who have become socialists can be expected to sit back and wait for a majority to join them before being able to do something constructive. But no-one's asking them to do this. There will be a whole series of "practical" actions, apart from socialist propaganda activity, that will become possible when once there is a substantial minority of socialists (as opposed to the tiny minority we are today). Our pamphlet "Socialist Principles Explained" says:
"The organisation and day-to-day running of socialist society will be a completely separate issue. It will have been discussed and planned at great length by everybody before the actual take-over of power takes place. "
and:
"As the old regime is abolished, the new, really democratic, social order, discussed and planned for so long beforehand, will come into operation".
For instance, there will be involved in:-
* the challenges of the practice of democracy within the socialist political party, and the broader socialist movement generally.
* the task within the trade unions to prosecute the class struggle on the economic front in a more class-conscious and democratic way as well as drawing up plans for keeping production going during the period of social revolution while the political action is being taken to end the monopoly exercised by the capitalist class over the means of production.
*participation within the numerous associations, clubs and mutual aid groups that will flourish at this time, to discuss and prepare the implementation of plans in such fields as town planning, education and culture both after and to a certain extent even before the establishment of socialism.
The growing socialist movement would be preparing for the change-over to socialism and drawing up of plans to reorganise decision-making on a fully democratic basis and to reorient production towards the satisfaction of needs once class ownership and the operation of capitalism's economic laws have been ended. People working in organisations like the WHO and the FAO and the host of other NGOs and charities would be dusting off plans to eliminate world hunger and unnecessary disease. Socialist educational and media ventures would be coming into existence.
We in the SPGB can picture a socialist party and movement growing in the future along with many working class organisational forms including trade unions, councils, the old Industrial Workers of the World idea of One Big Union but not without certain caveats. Workers' councils have, in the past, been a very independent body of workers created at the workplace itself (Russia 1905, 1917, Germany 1919, Hungary 1919, the British General Strike, Council movements in Ireland and Scotland in the same period, in Italy, Hungary 1956, Poland 1970). They usually arise in situations of economic and political crises. They also often rise in opposition to the established trade unions. They are very much spontaneous organisations that do not have any clearly defined political goal (in our case, socialism). Their existence can challenge the State, but not necessarily so. Their inherent problem is that they can be political organisations (again not necessarily so) but tied to the prevailing economic structure of capitalism. And because they arise in response to whatever crisis, their coordination is difficult, and the political consciousness of the workers not necessarily socialist in the end. In past revolutions, the councils have swayed back and forth between political parties and movements and there is no "conscious" action other than a responsive one.

Whereas, a socialist party has the advantage because its interest and actions do not revolve around this or that section of the working class, but of the working class as a whole. And it functions as the instrument to "take hold of the state machine", to seize the levers of government. Councils do not nor cannot do that. They can set themselves up as a dual power to the government or State, but the State still has the control of bureaucracy, army, police force, all forces of oppression. What has to be captured is the State itself to dismantle all this "bureaucratic-military machine". The State already exists as a class institution, the representative of the capitalist class. It exists as a creation that "administers" capitalism and thus a Socialist party must come to the fore which challenges the capitalist class in the political arena in order to seize this administration, "lop off its worst parts" and be provided with the institutions already in place to implement socialism. Now, this is where councils if they are established, could come into play.

The Socialist Party cannot control whether or not workers become socialists. What we can offer, and what we have continuously provided, is a theory of revolution which, if had been taken up by workers, would have prevented incalculable misery to millions. Over the years, the Party's theory has led to the formation of a body of knowledge which has been consistently capable of accurate political and economic predictions. For example, in 1917, the Bolsheviks were convinced that they were setting society in Russia on a course of change towards socialism. The Party argued that socialism was not being established in Russia. What followed was the horrendous misery of the Stalinist years. The Party put forward the same view of events in China in 1949. What is happening in Russia and China now? The rulers of these state capitalist regimes introduced free market capitalism. We warned against situations where groups or sections of workers try to stage the revolution or implement socialism when the rest of the working class is not prepared. They will only be prepared when they accept the need to capture political power and THEN the implementation of socialism based on majority support can begin. Otherwise, you may have a situation where a minority may push the majority into a situation it is not prepared for and the results could be disastrous. What comes to mind is the situation in Germany in 1919 when large groups of workers supported the Spartacus group while the majority of the working class still supported the Social Democratic Party. The uprising was put down brutally and the working class was divided. In regards to gradualism and reformism when in 1945 the Labour Party was elected with the objective of establishing a "socialist" Britain, the Party, again arguing from its theory, insisted that there would be no new social order. In fact, that Labour Government steered capitalism in Britain through the post-war crisis, enabling it to be massively expanded in the boom years of the 1950s. What is happening in the Labour Party now? Confused and directionless, it stands utterly bankrupt of ideas. The Labour Party even abandoned its adherence to Keynesian theories which the Party always insisted could never provide policies which would remove the anarchy of capitalism. Its ideas on the progressive introduction of socialism are now only a distant memory.


All theoretical mysteries find their rational solution in human practice and the comprehension of this practice. Hence the idea of choosing between "abstract propagandism" and "doing something now" is as false a choice as choosing between theory and practice. We must have some theory linking the capitalist present and the socialist future. Some theory yes, but not just any theory. This theory must be based both on the class struggle as the motor of social change and on an understanding of the economics of capitalism and the limits it places on what can be done within the framework of the capitalist system. As socialists we are engaged in a necessarily contradictory struggle: on the one hand, we propose the abolition of the wages system as an immediately practical alternative, but on the other, we recognise the need for workers to fight the wages struggle within capitalism. But, as socialists, our main energies must be directed towards the former objective. We could endeavour to remove this distinction between the trade union struggle within capitalism and the socialist struggle against capitalism by adopting the ideas propounded by DeLeon and the Socialist Labor Party, who at one time advocated that socialists should form their own "revolutionary unions" but their failure is a very important case study of the danger of imagining those capitalist institutions such as trade unions can be converted (or substituted) into socialist bodies. They demonstrate that capitalism cannot be transcended from within.
The advantage of a socialist party is that it acts in the interests of the whole class and does not, in the process, disenfranchise anyone. The working class needs a political organisation, not one segmented on the basis of how the industry is set up under capitalism. An organisation of socialists is needed. As it grows then the dynamic of the class struggle changes and goes off into new directions.