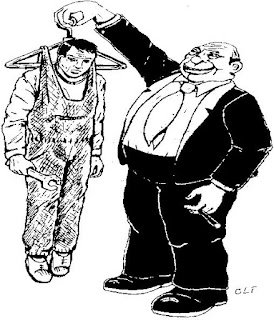 “We live in a divided Scotland where ten chief executives become millionaires every year whilst tens of thousands live on poverty wages on zero hour contracts.” Unite union leader Pat Rafferty said. He said the executive pay packets were “an insult to the poor in Scotland and a monument to greed.”

Scotland's top chief executives are pocketing pay packets worth more than 24 times the salary of the average worker, The Herald can reveal, amid claims the income gap has become a "monument to greed".

The highest paid CEO among the 39-strong cohort was Ross McEwan of Royal Bank of Scotland, who earned £3.5 million last year despite the bank posting a loss of £7 billion.
His salary is the equivalent to that banked by 152 average workers.

Over the last year the group of chief executives accepted a collective two per cent pay cut, but still amassed more than £35 million in remuneration, with half earning six-figure bonuses.
Research by The Herald has found that median pay for chief executives in their companies’ most recent financial year was £556,000, down from £596,000 the previous year, representing a cut of 5.6 per cent. However, there was a median increase in salary for two per cent of bosses among the group, with 19 business leaders receiving a salary increase, three seeing their salaries cut, and eight individuals experiencing no change. The average gross salary in Scotland is £22,918.

Rafferty insisted that best way "to reduce inequality is to build the trade union movement to secure better pay and conditions for the lowest paid”. He added: “The problem with the Tories is that they think that the rich don’t have enough money and the poor have too much.

Next on the list are Martin Gilbert and Keith Skeoch, now joint chief executives of the recently merged financial giant Standard Life Aberdeen. In the last year before the merger, they were paid £2.8m and £2.75m respectively.

Simon Thomson from Cairn Energy was the best paid chief among Scotland’s oil and gas sector’s listed businesses, and fifth overall, with a total remuneration of just over £2m.

Only three earned less than £100,000 with the lowest paid on the table being Trevor Brown of Braveheart Investment Group, who picked up £37,417 in spite of his predecessor as chief executive, Geoffrey Thompson, being paid £234,721 the previous year. However, Mr Brown owns 29.85 per cent of the share capital in the business.

Mr Gilbert again had this year’s highest bonus, of £2.3m. The highest salaries paid to individuals on the list was £1m, to bank bosses Ross McEwan and David Duffy.
The total bonus pot was £9.5m, representing 27 per cent of the total.
Just eight chief executives reaped the rewards of a long-term incentive plan (LTIP), with Ross McEwan’s salary-matching £1m payment being the largest.