Socialism is the recognition of the suppression and oppression of the working class under the present form of society, based as it is upon their exploitation and subjection. Working-class emancipation can only be achieved by a collective effort, organised and aimed at the conquest of the political power.

Many believe that our capitalist society is the only world possible. The truth, though is tragically plain. Capitalism involves the perennial affliction poverty. It doesn’t matter that an individual or family needs a decent food or a comfortable house if they do not have enough of the rationing vouchers that capitalism calls money, then tough. Capitalism has one driving force, and that is to make profit, not to supply resources to prevent pressing social need
Capitalism is run in the interests of those who own the means of making wealth. The working class, who own nothing in the way of creating wealth, have no choice but to work for the capitalist class for wages or salaries, and through their labour create every last penny of profit for the privileged class. A caring, people-based society would readily see the solution: apply the skills and resources to the problem. That will not happen in our capitalist society, for the missing ingredient of profit cannot be made in sufficient quantities.  It makes no difference that society wishes to do something about it, for the capitalist rule is No Profit, No Solution.

Capitalism runs governments, not the other way round. Reforms are a redistribution of poverty, not wealth. And reforms are reversible. Remember the Welfare State? Real socialists do know the solution and it’s the only one that tackles the real problem, not merely the symptoms. Capitalism needs to go.

The fundamental position of the SPGB is that "Where it is a question of a complete transformation of the social organization, the masses themselves must also be in it, must themselves already have grasped what is at stake, what they are going in for [with body and soul] . “- (Engels 1895) .


There is no easier road to socialism than the education of the workers in socialism and their organisation to establish it by democratic methods. Shortcuts have proved to be cul de sacs. The Party’s case is that socialism will be established by the conscious democratic political action of a majority of workers using the electoral machinery, which in this country means parliament. Only a democratically elected socialist majority can introduce socialism after the capture of the machinery of government. Should an anti-socialist, undemocratic minority attempt to sabotage or disrupt social organisation and administration, a socialist society necessarily take such action as was requisite to ensure social harmony. the democratic state has been forced, against its will, to bring into being methods, institutions, and procedures which have left open the road to power for the workers to travel upon when they know what to do and how to do it. In this country the central institution through which power is exercised is Parliament. To merely send working class nominees there to control it is not sufficient. The purpose must be to accomplish a revolutionary reorganisation of society, a revolution, in its basis, which will put everybody on an equal footing as participants in the production, distribution, and consumption of social requirements as well as in control of society itself. So that all may participate equally, democracy is an essential condition. Free discussion, full and free access to information, means to implement the wishes of the majority which have been arrived at after free decision, and means to alter decisions if the wishes of the majority change. In most of the less developed countries political democracy does not yet exist. The governments there, whether representing the old landowning or the emerging capitalist class, stifle criticism and threaten the organisation of opposition parties and even of trade unions as plots to overthrow them. In such circumstances socialist activity is very difficult and the workers (being only a minority of the population), besides trying to organise into a socialist party ought also to struggle to get the freedom to organise into trade unions and win elementary political rights. As in the advanced capitalist countries, however, this should still involve opposition to all other parties in order that the socialist issue shall be kept free from confusion.

Ordinarily industrial action, that is, action by trade unionists on the industrial field is circumscribed firstly by capitalist control of state power, secondly by the fact that the capitalists with their wealth and their ability to rely on the backing of the state power can always defeat a strike if they choose to fight to a finish, thirdly by the lack of socialist consciousness in the great majority of the workers and their consequent preoccupation with sectional issues and inability to take a class view. The minority of the working class who are in trade unions and the workers outside alike vote predominantly for capitalist parties in elections and look to these parties to try to solve working class problems within the framework of capitalism. The strike normally operates through financial pressure on employers by interrupting production and the flow of profits and is correspondingly ineffective in times of bad trade and heavy unemployment when indeed the employers may themselves choose to halt production by lockouts.

Various organisations claiming to be socialist but working only to secure a modification of the policy of a government within capitalism, or to secure the election of a Labour Government to introduce measures of state capitalism, advocate so-called "political strikes" to force a government to change its policy or to resign. One of the obvious weaknesses of such movements is that as they are directed against one government, which large numbers of workers support at elections, and in favour of an alternative government, large numbers of trade union and other workers who will support an industrial strike will not support a "political" one.

"Political" strikes are not new. In the nearly two centuries of continuous trade union organisation in this country they have been advocated and tried on a large number of occasions, in particular to prevent a tightening up of trade union law. Not one of them has ever succeeded in preventing the government from passing trade union legislation which it was bent on introducing. Recognising the facts of the situation trade unions have been far more effective in finding ways round hampering laws, especially as there have always been some employers who have chosen to connive at breaches of the law and have used their influence to make laws inoperative.  In the years 1970-1973 there have been a dozen or more "political" strikes directed mainly to prevent the passage of the Industrial Relations Act or the payment of fines under the Act, or against the Government's wages policy Act and rising food prices. At the cost of about £30 million in wages, they achieved absolutely nothing.  Serious "political" strikes to overthrow a government come up against the whole state power and many of those who advocate them do so as part of a policy designed to get the workers to engage in the suicidal tactic of armed conflict with the police and armed forces.

We represent the political interests of the working class as a whole. We are opposed to capitalism as a whole, high profits or low profits, high wages or low wages. Unfortunately, there is the belief of many individual workers that the most positive step they can take in life is to struggle constantly for higher wages. This is no end in itself, and while workers persist solely in such a struggle and ignore socialist ideas they help to perpetuate capitalism.

The Socialist Party's distinctive view of the conditions that must exist and the step that must be taken before the establishment of socialism can be inaugurated is that there must be a predominantly socialist working class and that it must “organise consciously and politically for the conquest of the powers of government, national and local", in order that the machinery of government, including the armed forces, may be converted from an instrument of oppression into the agent of emancipation. This is based on the Marxist conception of history that every class struggle necessarily becomes a political struggle, in which the subordinate class seeks to wrest the dominant state power from the hands of the old ruling class.

For so long as capitalist political parties and their agents control the law-making bodies, the armed forces, courts and police, the administrative and tax-gathering departments, local councils, etc, all organisations and actions, whether industrial or political, are strictly limited in their scope because whenever the government decides that a vital capitalist interest is seriously threatened it will use all of its powers to protect capitalist property and privilege. The government's ability to take such action depends on the willingness of the workers in government administration, the armed forces and police, etc to carry out orders. When the socialist movement becomes much stronger among the working class generally it will increasingly influence the outlook and sympathies of workers in the administration, armed forces, etc and the government's freedom of action will be correspondingly lessened.

After the process of establishing socialism has been completed the idea that capitalism might be re-established is remote from reality, nevertheless, opponents of the Party ask us to consider how socialist society would deal with an attempt to achieve this by force. A minority who may wish to return to capitalism will be free to propagate their views and to organise democratically to win over the majority, but they will operate at the tremendous disadvantage that they will already have lost "the battle of ideas". There remains the hypothesis of a small minority who might attempt to sabotage or disrupt social organisation and administration.

The control of the armed forces during this period will be an effective deterrent without these forces having necessarily to be used. The state machinery, including the armed forces, will have passed out of the control of the capitalists and come under social control; Socialists will constitute the majority in all occupations in which the working class predominate -- in production, transport, communications, police and armed
forces. The supporters of capitalism will have been reduced to a minority and the mass of society will be made up of people who either want or accept the new system. The overwhelming mass of the people will participate, or fall in line with, the process of reorganisation (in other words that while the workers will participate in the movement and probably individual capitalists, the capitalists as a whole will realise that the game is up, as they have lost the power of effective resistance. 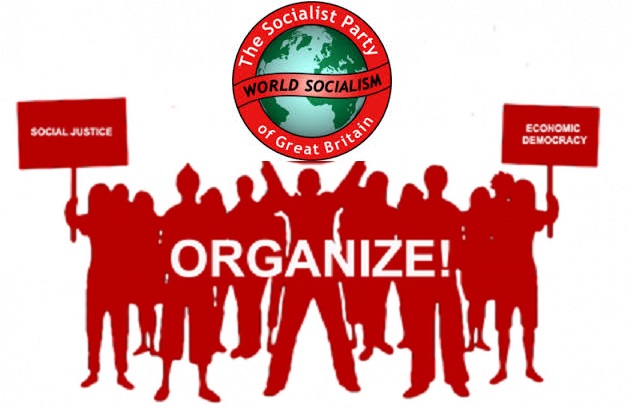