Public support for fracking has fallen to 16%, with opposition at 33%. But it also reported a lack of knowledge of the technology, with 48% of people neither supporting nor opposing it.

Fracking for gas will not work in the UK, according to research carried out at Heriot-Watt university. Prof John Underhill, Heriot-Watt's chief scientist and professor of exploration geoscience, said the geology of the British Isles will not support it. The fracking debate, he has claimed, is 55 million years too late. He said the rocks containing shale deposits in the UK are riddled with fractures. Fifty-five million years ago the rocks on which the British Isles stand were pushed up against continental Europe. They began to tilt. Subjected to enormous forces, the rocks didn't just lift but folded and fractured.
A tracery of black lines show where fault lines shatter some of the UK's biggest shale deposits: West Lothian, Bowland Shale in Lancashire, the Weald Basin. His research on the influence of tectonic plates on the UK suggested that the shale formations have been lifted, warped and cooled by tectonic action.
"For extraction to occur," he says, "you need a simple geology in the subsurface. So you can drill and then drill horizontally for long distances with confidence. Not go up, down, around. If you've got a fractured subsurface and something that's uplifted, you've switched off the kitchen in which oil and gas is generated - and you've broken the rock so it's not continuous."
Successful gas extraction requires shale to be underground at just the right temperature and pressure. That's how it happens in the US. A drill digs deep, then turns to push and frack horizontally along the shale deposit. And that, according to Prof Underhill, is what can't happen here. Because Britain is broken, geologically speaking. "The complexity of the shale gas basins hasn't been fully appreciated so the opportunity has been hyped." He said: "I'm neutral about fracking, so long as it doesn't cause environmental damage. But the debate is between those who think fracking is dangerous and those who think it will help the economy - and no-one's paying enough attention to the geology. Prof Underhill said: "For fracking to work, the shale should be thick enough, sufficiently porous, and have the right mineralogy. The organic matter must have been buried to a sufficient depth and heated to the degree that it produces substantial amounts of gas or oil." 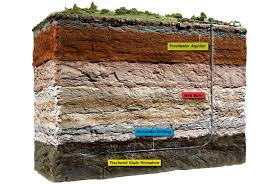