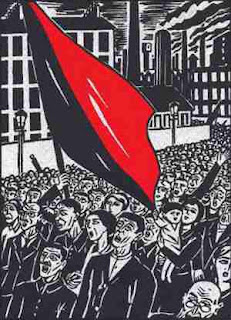 The 2007/2008 crash drove capitalist states and capitalist companies towards some desperate measures to try and stabilise the system and restore and where possible increase real profit levels. But this is not to assume that particular capitalist governments or companies are stuck with only one set of inflexible policies.

The problem is that isolated struggles by workers in the context of intense capitalist competition will give the capitalists more ability to offload any gains made by one sector onto other workers The generalisation of struggle will make that harder for them to achieve this and can potentially push back the austerity measures across a wider front at least on a temporary basis.

Alexander Berkman, the author of the anarchist ABC, put it, "capitalism will continue as long as such an economic system is considered adequate and just". Until people see through it capitalism will continue to stagger on from economic crisis to war to ecological crisis. To simply denounce finance capitalism as the main enemy is to side with industrial capital in the struggle between the two over how much each is to receive of the wealth produced by the worker class. When we challenge capitalism, we challenge it all or we do not challenge it at all.

For decades self-proclaimed "Marxists" (especially Trotskyists) fetishise the word "crisis", and describe every economic downturn and political turn of events as the "crisis of capitalism" or even prophesising the "inevitable" (Manifesto) end of capitalism. Its proposed that in a crisis, the closer we are to revolution. The worse conditions become - the more politicised and inclined to take direct action the populace become. Some communists welcome the economic crisis of capitalism and claim there is no perspective of revolution without it. Some of those "Marxists" say "bring on the crisis" because for the working class things will not be able to continue as before. It is argued that without some form of crisis there's no reason at all for the proletariat to revolt. As long as capitalism can offer us palliatives (or at least the illusions of them) to soothe our exploitation, the system will survive It is argued that crises open up the possibility of revolution, even if it doesn't guarantee it. But without a crisis there is no possibility whatsoever. There, unfortunately, won't be a perspective of revolution with it, either. Genuine socialists prefer that working class living standards aren't severely cut. How do we agitate workers around this issue? "Cheers for the crisis"!! Most of the vanguard Left seems to be basing all of its activity around either recruiting workers into their particular party or upon the vague hope that the working class will engage in some kind of spontaneous communist revolution. Wishing the massive impacts of a massive economic crisis/recession upon people's lives just in the hope that their fringe ideas will get picked up and perhaps adhered to by a handful of additional people, the contempt that it shows for humanity is disdainful. It also lays bare the complete and utter impotence of said movements in the first place. This overly optimistic wish fulfilment mixed with its crude utopian determinism does no justice to Marx.

Economic crisis and increasing misery for the working class doesn't necessarily and inevitably lead to revolution. Relying on the effects of the crisis seems to be the lazy way to try and approach social change, scrap all the groundwork and hope the crisis does it for you. While it is argued that downturns make people angry and more susceptible to revolutionary ideas, the opposite may be true. It may be downturns just lead to despair, fatalism, acceptance of misery and cynicism to things getting better. Upturns in the economy make revolution more likely because it is the human condition never to be satisfied and when you've got the job, house, wages, car and all the mod cons then you want more - security, control over your own life which can only be got by workers ownership and control of our own work, residents ownership of their own homes and individuals control over our lives, all of which can only be got by socialism, by way of social revolution. When that crisis occurs, the actions that are taken depend on the ideas that are lying around. That is our basic function: to develop alternatives, to keep them alive and available until the politically impossible becomes politically inevitable. The best we can hope for is to use this as an opportunity to re-group, in order to get the working class in a stronger position to start from when the boom returns. All we can do is to try to negotiate the best terms possible and try to resist as effectively as we can the increased downward pressures on wages and working conditions (for which we need collective organisation and action, even within the existing trade unions).

As to what the Socialist Party can do, at the moment being so small a minority, we can't do much more than keep on arguing that the only way-out is to replace capitalism by a system based on common ownership (instead of class ownership) and production solely for use (instead of production for profit) and to keep on urging workers to self-organise themselves democratically to bring this social revolution about.

The liberation of our class will only come about when we, the class ourselves, for ourselves, do the hard work of organising, which needs that we class conscious workers doing the equally hard work of convincing our fellow workers. At the end of the day , as pro-revolutionaries, it is not in our interest to try and save capitalism but rather to destroy it and to encourage current struggles to develop on an independent, self-organised, class basis and extend across national boundaries which may well give rise to an escalation of the social crisis and starts to challenge capitalism as a whole from a position of some class strength. Only the self-organisation of the proletariat contains the potential to defend its own interests both in the short-term economic and the longer term political. A working class that can't defend itself is also a working class that is incapable of making a revolution.

Marx wrote "Philosophers have only tried to understand the world. The point is to change it."
The Industrial Workers of the World sang "Don't moan, Organise!"
We in the Socialist Party say “Join us.” 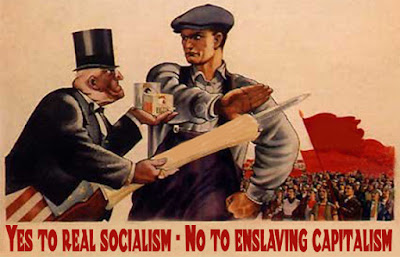