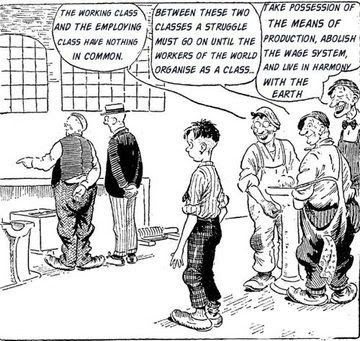 Marx observed in 1865 that wage levels can only be "settled by the continuous struggle between capital and labour, the capitalist constantly tending to reduce wages to their physical minimum, and to extend the working day to its physical maximum, while the working man constantly presses in the opposite direction."Hal Draper later remarked, "To engage in class struggle it is not necessary to 'believe in' the class struggle any more than it is necessary to believe in Newton to fall from an airplane. There is no evidence that workers like to struggle any more than anyone else; the evidence is that capitalism compels and accustoms them to do so."Unlike peasants in a capitalist society the proletariat as the most exploited class divorced from the means of production and therefore condemned to live by selling the only commodity they are left with, their bare hands, or their labour power to the owners of capital. Therefore they are the most revolutionary class. They are located in the most progressive sectors of the economy i.e. large-scale machine production in urban areas and working together in large bodies under one roof. For that reason,  they are the most organised, the most disciplined and therefore the most revolutionary class in capitalist society. And as Karl Marx observed, having lost their property to the capitalists they have nothing to lose in the struggle but their chains. They see for themselves that they toil and live in deplorable conditions and yet they are the creators of the country's wealth which accumulate in the hands of a few rich people.  More than any other class, they are interested in the abolition of private property and exploitation of one person by another and the eventual collective ownership and management of the economy by workers' councils or soviets. This makes them the most revolutionary class once their class consciousness is awakened. Their class interests are irreconcilable with those of capitalism.In a society of class antagonism, there are basically two socially opposing types of people - the capitalist exploiter and the exploited working-person. This polarisation is sharper in advanced capitalist economies where the bourgeoisie regards the working class as an object for the extraction of surplus value - the source of their profits. The workers are reduced to cogs in the machinery of capitalist production and denied all rights. However, it is important to note that in a capitalist society the workers have actually accomplished a great deal. Due primarily to their efforts, massive productive forces have been built up, which make it possible to create unprecedented  material and spiritual wealth for the benefit of all. The first condition, especially in advanced capitalist countries,  for building a society of equals in which the workers themselves become the aim and purpose of production have already been created.Unions are important because of the centrality of the working class to the larger struggle for socialism. Karl Marx was the first socialist among his contemporaries to recognise this important role of the working-class and therefore trade unions, as the only leading force in the struggle for a socialist revolution. Utopian socialists before Marx had dismissed unions as irrelevant and some of them even opposed strike action. Marx understood the absolute importance at all times of organising this class to unite as a class against their capitalist enemy.The trade unions are workers' front line of defense against their employers under capitalism. But as vehicles for struggle, they are also crucial to the future self-emancipation of the working class. But there is also a contradiction: unions both negotiate the terms of exploitation of workers under capitalism and also provide the vehicle for struggle that can prepare the working class for revolution. Capitalism forces workers into competition with each other-native vs. foreign born, skilled vs. unskilled, and so on-exploiting every opportunity to keep workers divided. Organising into unions, which presents the opportunity for collective struggle against the employers, thereby reduces competition between workers. Marx and Engels wrote in the Communist Manifesto, "This organisation of the proletarians into a class, and consequently into a political party, is continually being upset again by the competition between the workers themselves. But it ever rises up again, stronger, firmer, mightier."

In the the US, the number of strikes fell to their lowest point on record in 2009 and to the second lowest in 2010. These figures demonstrate the extent to which labour leaders have been unwilling to use labour's most effective weapon, the strike. Decades of concessionary bargaining-at first, claimed to be a temporary phenomenon-have made wage and benefit cuts routine aspects of union negotiations, thereby enabling the deterioration of working-class living standards. Conservative trade-union leaders are de facto agents of the employing class trying to hide behind the mask of trade-union neutrality in order to divert the workers from the path of class war onto a path of collaboration with the capitalist. Economics and politics are inseparably linked. In practice, trade union neutrality amounts to supporting the bosses.

History has shown that the rate of union membership corresponds to the rise and decline in the level of class struggle. If the current balance of class forces can only be reversed through a revival of class struggle, then the key challenge facing union activists is how to transform their unions into fighting organisations. For Marxists, this necessarily entails, step by step, strengthening the fighting capacity of workers in general, and union workers in particular.The working class must now conquer capitalism. And history has bestowed the role of conquering capitalist society squarely on the shoulders of the working class - they are the undisputed 'grave-diggers' of capitalism. It is therefore totally inconceivable that this class can be denied the right to intervene in politics to liberate themselves and society at large. Every social and political movement tending in that direction should be aided by the trade unions. Unions must be champions of the entire class and should not form themselves into corporate bodies only of their members, shutting out non members. It is their duty to help organise those who cannot organise themselves easily and protect the interests of the worst paid trades like agricultural workers. Experience  bears testimony to the fact that trade union involvement in broader struggles has a salutary or beneficial effect on the working class than being stuck in the narrow and parochial rut. The trade union movement must fight to bring the marginalised into the mainstream, and the weakest into more advantageous positions in society. By their action they must demonstrate that they are not using their organised strength only to guard their interests, but for all the downtrodden. 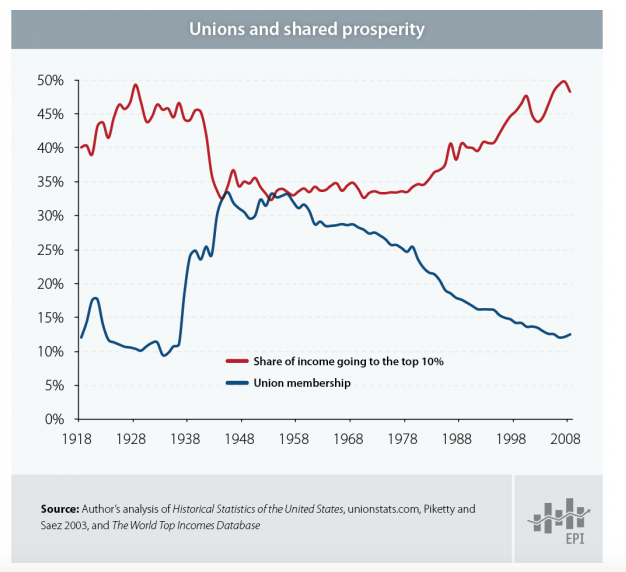