The 1797 Massacre of Tranent 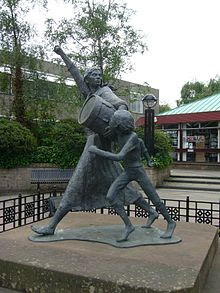 The Scottish Militia Act of 1797 conscripted able-bodied Scottish men between the ages of nineteen and twenty-three into military service. Ordinary people hated the Act.  It was seen as a direct attack on workers because members of the bourgeoisie could always buy their own exemption. On August 17, 1797 a large crowd gathered at Eccles in Berwickshire armed with sticks and stones.  They made clear that they were intent on stopping the authorities from implementing the Act.

Aberdeen, Dalry, Galston, Strathaven, Freuchie, and Kirkintilloch all saw rioting as a result, and the government responded by sending in troops.

When the army rode into East Lothian on 28 August 1797 to pick up the conscriptees, they found the roads lined with women and children from the local villages who marched behind a drum shouting "No Militia" and at a mass meeting in  Prestonpans where a series of resolutions were then passed denouncing the Act.  The demonstrators then returned to Tranent.  Once in the village itself, the troops tried to proceed to the assigned meeting point, but there was a crowd gathering with sticks and a drum. a proclamation was drawn up by local people to object to the conscription of Scots into the British Militia, to be used either for controlling their own people or for deployment elsewhere. The proclamation comprised four clauses:-
On 29 August, the proclamation was handed to Major Wight, the commanding officer of the recruitment squad; it was initially ignored. Later, a contingent from the local colliery communities, led by 'Jackie' (Joan) Crookston challenged the troops and the response was swift and bloody.  There was a protest, and soldiers who had been confined to the John Glens public house in Tranent broke out of the back door, many of them the worse for drink,  and adopted a "shoot to kill" policy against the local populace. Several of the protesters, including Crookston, were shot dead out of hand. The dragoons rampaged through the streets driving the protesters into the fields where the  cavalry would be more effective. The protesters fled from the centre of the small town into the countryside, pursued by the Cinque Port Light Dragoons and the Pembrokeshire Cavalry who cut down people indiscriminately, caring little whether they were involved in the protest or not. Casualty estimates range from around a dozen to twenty or more men, women and children dead, with many more injured. After the slaughter the troopers carried out rapes and pillage in the small town.

The Lord Advocate of the time, Robert Dundas, decided not to indict the soldiers for shooting unarmed civilians because "such a dangerous mob as deserved more properly the name of an insurrection."