A Write-In Vote for World Socialism 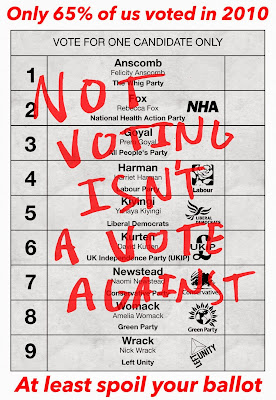 Karl Marx did argue that under certain conditions a socialist-minded working class would be able to gain control of political power peaceably via elections. Having said this, our position does not rest on what Marx said, as we don't slavishly accept him as an infallible authority, but on our own analysis of the facts which in our view confirm Marx's point of view. Many on the Left reached differing conclusion and declare there is no parliamentary road to socialism, describing it as a blind alley. The standard argument against the revolutionary movement contesting elections is that this inevitably leads to it becoming reformist; revolutionary MPs whatever may have been their original intention, end up merely administering capitalism. This, they claim, can be seen from the history of, first, the European Social Democratic parties which once claimed to be Marxist and, more recently, of Green parties which said, as in Germany, that they were only going into parliament to use it as a tribune from which to proclaim the need for an ecological society. When, however, it comes to explaining why this happens they fall back on the lame explanation of “power corrupts”.

We can agree that this is what happened to these parties but offer an alternative explanation: that such parties went off the rails because they advocated reforms of capitalism and not just its abolition. The originally Marxist Social Democratic parties had in addition to the “maximum” programme of socialism what they called a “minimum programme” of immediate reforms to capitalism. What happened, we contend, is that they attracted votes on the basis of their miniumum, not their maximum, programme, i.e. reformist votes, and so became the prisoners of these voters. In parliament, and later in office, they found themselves with no freedom of action other than to compromise with capitalism. Had they been the mandated delegates of those who voted for them (rather than leaders) this could be expressed by saying that they had no mandate for socialism, only to try to reform capitalism. It was not a case of being corrupted by the mere fact of going into national parliaments but was due to the basis on which they went there and how this restricted what they could do. In short, it is not power as such that corrupts. It is power obtained on the basis of followers voting for leaders to implement reforms that, if you want to put it that way, “corrupts”.

The Socialist Party advocates only socialism and nothing but socialism (the so-called “maximum programme”, if you like.) The correct formula is contesting elections only on the basis of delegates being given an imperative mandate for the sole purpose of carrying through the formalities involved in winding up capitalism.

The politicians, the media and the rest of what are called ‘opinion formers’ insist that we have democracy, that we have free elections which allow us to choose whatever form of government we wish, unlike countries where a dictatorship exists. Such dictatorships usually allow elections where the people may approve or disapprove of given candidates within the dictatorship but have not the freedom to vote for any other parties or for independent candidates. In other words the people have imposed on them by force, corruption or the control of information a specific political regime and have not got the necessary democratic machinery to challenge that regime. In fact in most of the so-called democratic countries it could be said that the astronomical costs of challenging for political power have been deliberately manipulated in order to ensure that those who cannot attract rich backers will be denied meaningful access to the democratic process. Effectively this means that in the same way as people in dictatorships are denied the right to make real political changes, in Britain and other allegedly democratic societies prohibitive financial restrictions are placed in the way of the working class organising politically to effect real economic change.

This does not mean that socialists equate dictatorship and bourgeois democracy. Within the latter we are free to organise politically and to develop our support to the extent where we can eventually overcome the embargoes and impediments that capitalism’s restricted democratic forms impose on us, whereas in the former any Socialist work is necessarily clandestine and can invoke severe penalties. What we can equate is the hypocrisy of bourgeois politicians, who rightly condemn those capitalist dictatorships where political freedom is denied and yet are willing participants and vociferous defenders of a form of capitalism wherein financial impediments exist that make a mockery of real democracy.

Real power today does not lie in elected bodies but in the hands of those who own the world’s wealth. Labour, Tories, Nationalist and the others in this election are just arguing over how to use the scraps thrown from the billionaire’s table. A system based on private property has to be run in the interests of its owners. Their profits have to come first. So long as inequality of wealth and power exist elections such as these are just about who is to run this system. The only rational choice is to reject the compromisers and reformists and use every resource available to end it. You don’t need to vote for any particular party to get rubbish collected, schools built or amenities provided. Communities don’t need leaders to get those things for themselves. You know what you need better than any careerist politician ever could and, if there was real democracy, could easily arrange this. Under the present system, though, you only get them, so long as those who own the world make the resources available. But they always give priority to making more profits, so these things are always under-resourced and never done properly.

In the general elections on 7th May, as in all elections, you have a choice. You can vote for candidates who would work within this system and help keep it going. Or you can use your vote to overturn it and end the blights once and for all. You can send a clear signal to other people like yourselves upon whose hard work this system is built that you want to put an end to it, by refusing to vote for any of the capitalist parties and instead writing “World Socialism” across the ballot paper.

At this stage contesting elections can essentially only be an exercise in political education, of getting ideas across. It is why we contest elections today knowing perfectly well that we have no chance of getting elected. When enough of us join together determined to end inequality and deprivation we can transform elections into a means of doing away with a society of minority rule in favour of real democracy and equality. Our common efforts could feed, clothe and house every man woman and child on Earth without exception but we are held back because the owners of the world demand their cut before they’ll let us use the world’s resources. The iron laws of No Profit, No Production and No Profit, No Employment are a cage for us.

If you agree with the idea of a society of common and democratic ownership where no-one is left behind and where things are produced because they are needed, and not to make profits for some capitalist corporation or to enrich some bloated millionaire, and are prepared to join with us to achieve this, then vote for World Socialism.