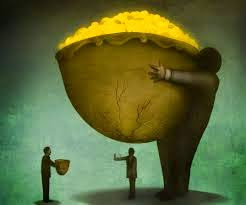 Socialism, in its traditional and true definition, means workers democratic ownership and control of the means of production. Such a definition implies that rather than state ownership and a government bureaucracy for managing such means, there is a focus on every individual becoming an active, rather than passive participant in the decision-making that which effect their lives. Advocates of nationalisation have repeatedly re-defined the meaning of "socialism" to mean arbitrary rule by a set of "leaders", a political con-game in which “socialism” is little more than capitalism with a few adjustments to make it more bearable.

Human beings are social and need and prefer to live in collectives. For most of our existence the vast majority of people were nurtured by extended families, tribes, clans, village communities. A problem of the modern world is that the state has become conflated with the idea of community. For example, nationalists and patriots feel that they are standing up for “the people”,  “our” army is out there fighting for “us.” But this viewpoint is based on a delusionary perspective. A distinction needs to be made between local/regional community and what constitutes the nation-state.

Socialists offer an eco-communitarian model of decentralisation that would restore our social heritage. A severe weather event doesn’t need to become a natural disaster.  Under dire circumstances, people try to cope and solve problems together. Communities and their social bonds foster that cooperation. However, the overarching concern of the authorities is to keep people passive, to keep people in place, and to keep people under control. This is a system in which a small owning-class of capitalist-imperialists controls the economic lifelines and resources of society. It is a system where profit rules. It is a system where state power is used to preserve and extend global exploitation and misery, and to suppress resistance. When the exercise of that control is broken by something such as an earthquake or typhoon then there is indeed a crisis.

The disruptions in transport and power generation, the dislocation of basic services, and the fact that the city stopped working when people could no longer work—all this revealed how densely interconnected are the activities of social and economic life is. Yet there is no conscious social planning to meet human need, to mobilize for emergencies, to protect vital ecosystems. The capitalist financial-administrative command-and-control is centred upon the globalised market. It is profoundly parasitic. Resources are siphoned towards real estate, speculative construction, and development. People are atomized by the very workings of the capitalist system. They are forced to compete with each other for jobs, for housing, for higher education. Why? Because of private ownership and control over the means of producing wealth and over the resources of society. It is a system where people are compelled to sell their labor power to survive. At the same time, the system promotes its ethos of each for him or herself, and sets people against each other. People who have a great desire to join together to respond in a crisis like the aftermath of a hurricane have to have that potential held in check and even quashed by this system. Only the organs of the state are permitted to act.

In socialist society, the means of production—the factories, transport, telecommunications, land, raw materials, and so forth—will no longer be the property of a small handful of exploiters or the government but will be under a system of common ownership. This will enable society to utilize these resources for what is useful and important to the betterment of humanity. People will be guaranteed work; and instead of being drudgery, work will be contributing to the development of society and people's all-around capabilities. The new socialist society will develop an economy that is no longer based on oil and other fossil fuels and long-distance supply systems. This will require extraordinary innovation and effort, but it will be a priority. The new society will aim to create sustainability—more capable of producing to meet basic needs, including food. Rather than being isolated and penned up in an urbanized sprawl, people will be able to interact with each other in meaningful ways, to organize socially, to create and enjoy culture, and to forge vibrant community.

In a tsunami, for example, socialism would allocate the needed resources, like food, temporary shelter, building materials, equipment, to where they would be needed most. This will not have to go through the patchwork and competing channels of private ownership and control that exist in capitalist society. The allocation of resources would not be contingent on the preservation of private property and the profit system. All that it would be doing all is tapping into and unleashing the power of people to step forward and to help on all kinds of fronts. Relying on your fellow workers would be at the heart of everything that would be done in the wake of such a disaster. Emergency priorities would be established—for instance in identifying the most vulnerable sectors of the population, helping the most devastated communities or areas of environmental degradation, and restoring critical links. Calls for volunteers would be issued and the means provided for them to become involved in relief efforts. Medical personnel, civil engineers, and so forth would be dispatched to where they were needed. Underlying this would be that inside socialism the division of labour would be more and more eroded. Specialised knowledge of experts would be popularised — for instance, ecological science, civil engineering — among broader sections of the people. But these experts would also be learning from the knowledge and direct experience and aspirations of others. Architects and city planners would be conducting investigations among the people, adapting themselves appropriately to the feed-back. Medical personnel would be gaining a deeper sense of local conditions and needs — and training para- medics and setting up local clinics. Incredible initiative and experimentation would be the norm and since conditions are not the same everywhere there will be constant discussion and debate on how to make the most of older equipment? How to conserve limited resources? What are the local priorities in rebuilding? Disseminating details of fact-finding missions. Group meetings in neighborhoods. Streamlining administration. Transmitting ideas to and criticisms of higher levels. In the aftermath of emergencies, big questions and controversies will pose themselves. Yes, there is acute short-term necessity to provide shelter, food, and health care, and to rebuild.

But these needs cannot be met by disregarding longer-term effects on ecosystems. There will be disagreements over specific policies. And in times of disaster, some will be intensely agonising over the overall direction of society. In a crises there will be contention and dispute. This process, if handled correctly by the new society, will actually enhance both the knowledge and understanding of reality of society as a whole, and serve to forge unity on a new and stronger basis of social bonds. It will mobilise the understanding of people that makes it possible for human beings to become caretakers of the planet. It makes it possible to bring a new world into being, a community of world humanity. Socialists do not hold a vision of an imagined “golden age” from a nostalgic past but instead plant the idea of a better-than-the-present in a potential and desirable future.