We Dare to Dream 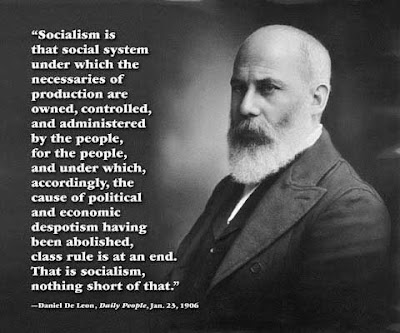 In 1912, Daniel De Leon declared that “We of the socialist movement hold that we are the real promoters of individualism, or individuality…We charge modern society, that is, capitalism, with crushing out individuality”.

We live in a world of poverty, war, and environmental devastation. A world where living standards for working people plummet while an elite few enjoy lives of unbelievable wealth and power. Something different—an alternative to capitalism—is desperately needed. But what should replace it? The Socialist Party considering our name, not surprisingly, proposes socialism, a society built from the bottom up through the struggles of ordinary people against exploitation, oppression, and injustice—one in which production is for peoples’ needs and profit. Socialism is the only possible alternative to capitalism, the source of gross inequalities and environmental disasters around the world. A society based on the principles of equality, democracy, and freedom. Is socialism an impossible, discredited dream? We say no but rather it is the only realistic path for human survival. The dream of human freedom is as old as class society itself. So long as one section of society has been held down and exploited by another, some men and women have dreamt, spoken and written about the possibility of a new kind of life. People do not conceive of themselves as having the capacity and power to overthrow their rulers and to build a new society out of their own efforts. The Socialist Party says you do, and must, emancipate yourselves.

When the Socialist Party talk about abolishing private property, we're not talking about personal property and possessions, like your house or your television. What we mean are the means of production: factories, hospitals, schools, etc.--i.e., the kinds of property most of us don't own, even though we may spend most of our lives working on that property and making the few people who own it very wealthy. Socialism will be about having more of everything, not less.

We’ll have much more free time. Right away, the working hours could be decreased dramatically--first off, just by leveling out all the people who are unemployed, with those working overtime or multiple jobs. Also, we could get rid of whole industries that are completely useless in any real sense. Advertising is a big waste. How many people will be truly sorry to never see another convincing us that Coke is better than Pepsi, again? Without the need to sell as much as possible to maximize profits, who gets produced and how it's made will also change. There will be no incentive to intentionally build products that wear out and break quickly or come up with 30 different brands of toothpaste that do essentially the same thing. These are just a few examples.

Professor of sociology at Boston College, Juliet Schor, has concluded that it would be possible to have a four-hour workday with no decline in the standard of living in a society that made sure every person had a job and that gave free reign to technological innovation. Economist J.W. Smith forecast: "We could eliminate much industrial pollution and conserve our precious, dwindling resources by eliminating the 50 percent of industry that is producing nothing useful for society." Smith examined the U.S. economy sector by sector and concluded, "We could all work 2.3 days per week with no drop in our living standard." This means is that in a socialist society, we would have time to focus on the things that really matter. We'd also have the time and energy to actively participate in making decisions about how society is run. The communications technology and corporate media that is now used primarily to sell things and perpetuate the ruling ideas of capitalism could instead facilitate the most widespread and varied debate. “Work” as we would understand it is all but nonexistent (along with ownership of work-places.) Nothing and nobody in socialism is exploited. It is essentially an automated civilisation in its manufacturing processes, with human labour restricted to something indistinguishable from play, or a hobby. Human beings and technology happily co-exist.

There's the perennial objection: If we lived in a socialist society, who would do the dirty work. First of all, under socialism, nobody would be forced to work a shit job their whole lives, which is what happens under capitalism. A lot of the most unpleasant tasks could be automated if making money wasn't the highest priority dictating how technology is used. We have the technical capability to send spaceships to Mars and land on asteroids, surely we can invent a machines to eliminate much of the unpleasant tasks in society. Unlike under capitalism, where advances of technology often end up hurting workers, with socialism, these advances could make everyone's lives easier. And whatever work couldn't be automated would be shared out in a rotation, instead of being shoved onto the most desperate and vulnerable in society.
The second part of the answer to the objection to socialism goes to the question of motivation. There's a pervasive idea in our society that the only thing that motivates people to work is money, and that without a huge monetary reward, nobody would opt to be, say, a doctor--everyone would want the "easier" job of porter. But that's ridiculous on so many levels. First of all, we should all be thankful that not all doctors are in it just for the money. There is something we talk about…a vocational calling

And why do the 3-D jobs, dirty, dangerous and demeaning, get so much less respect. After all, they are vital for the smooth running of cities and industries. Public sanitation is one of the biggest public health innovations of all time. Arguably, garbage men save more lives every day than doctors--by stopping all sorts of people from ever getting sick in the first place. Yet like all work under capitalism, this particular job is valued not by its contribution to society.

In socialism everyone will become both a producer and a planner of production. Everyone will have the time, the energy and the education to participate in the collective shaping of the environment--work which will require the fusion of artistic, scientific, technical and social knowledge, and that will be a collective, creative process. It would provide the spare time for all human beings to develop their creative potential. We would be free to learn the skills of economic and social management – presently the property of an elite few. In these conditions, work will become--in Marx's words--"not only a means of life, but life's prime want." It will cease to be a wearisome necessity and become a positive pleasure--a means of individual and collective human expression. In a way, socialism is nothing new. From the time of the Roman slave revolts, people have struggled for the dream of a society based on the values of equality, freedom, generosity and solidarity. We could readily meet everyone’s needs for food, housing, health, education, culture and recreation if the modern technologies, scientific knowledge, and organisational know-how were brought under the control of all people. Indeed, human labour is now so productive that we could achieve these goals at the same time as repairing the devastated natural environment.

Murray Bookchin held a vision of “liberatory technology.” He imagines its applications especially in the industrial sector:
“All but hidden from society, the machines would work for man. Free communities would stand at the end of a cybernated assembly line with baskets to cart the goods home. Industry, like the autonomic nervous system, would work on its own, subject to the repairs that our own bodies require in occasional bouts of illness. The fracture separating man from machine would not be healed. It would simply be ignored” He writes:
“It is easy to foresee a time, by no means remote, when a rationally organized economy could automatically manufacture small "packaged" factories without human labor; parts could be produced with so little effort that most maintenance tasks would be reduced to the simple act of removing a defective unit from a machine and replacing it by another—a job no more difficult than pulling out and putting in a tray. Machines would make and repair most of the machines required to maintain such a highly industrialized economy. Such a technology, oriented entirely toward human needs and freed from all consideration of profit and loss, would eliminate the pain of want and toil—the penalty, inflicted in the form of denial, suffering and inhumanity, exacted by a society based on scarcity and labor”

Noam Chomsky holds a similar view:
“I think that the industrialization and the advance of technology raise possibilities for self-management over a broad scale that simply didn't exist in an earlier period.…A good deal could be automated. Much of the necessary work that is required to keep a decent level of social life going can be consigned to machines -- at least, in principle – which means that humans can be free to undertake the kind of creative work which may not have been possible, objectively, in the early stages of the industrial revolution”

Having liberated humanity from need, technology would allow to help improve the relationship between human beings and nature. It is difficult to predict the effects that research and innovations in “artificial intelligence” could have but they will considerable. The capabilities of the “artificial intelligences” have eliminated any reason to entrust the management of collective affairs to an administration, even a delegated one..

We can also speculate that apart from direct democracy of general and work-place assemblies wider decision-making will be consist of referenda on issues whenever they are raised; generally, anyone may propose a ballot on any issue at any time; all citizens who may reasonably claim to be affected by the outcome of a poll may cast a vote. Opinions are expressed and positions outlined mostly via the internet and it is there that an individual may exercise their votes monitored  on a rota basis by a type of liaison person rather than someone with executive powers. Everyone’s opinion can be collected and be publicly voiced. This another form of public forum, where each person can put forth his or her arguments. And when discussions and procedures progress they can be followed thanks to feedback, which are also responsible for acting the resolutions that were voted on. If anarchy can be defined as “order without power” then indeed socialism is not far from it.

Socialism is about the future, it’s about freeing ourselves from the confines of the present with all of its oppressions, exploitations and “common sense” rationalizations of both. It is good to dream. We must dream socialist dreams. It’s the dreams of the future that give us the strength to fight like hell in the present. Some might call these dreams utopian but what’s the use of politics if it’s not for an ideal. Socialists look forward to the day when our descendants are befuddled by concepts like money, prices and private property being explained to them in history class.
By ajohnstone at May 30, 2015