There is no third way 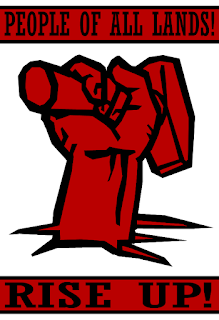 Utopia now: we can bring it about. The power is ours if we have the will!

Those of us in the World Socialist Movement have often been told our objectives are impossible but events throughout history prove that what is considered impossible aren’t. The past few weeks show how people have the power to bring about change. Socialists are people who ruthlessly criticise the capitalist system we consistently attack the widespread but false illusion that there can be no alternative to it. Capitalism is not only basically unjust but radically unsustainable as well, the prime obligation of a Socialist Party is to spread the information, to tell the inhabitants of a structurally unsound house doomed to collapse of what awaits them unless they take drastic measures. We attack the false idea that all we can seek to re-decorate and re-arrange the furniture for we are, so to speak, trapped in this house, with no hope of getting out. Socialism is very different from the failed mis-labeled workers’ states. The “dictatorship of the proletariat,” in Marx, is not the rule of an elite or a party on behalf of the people: it is rule by the people, their actual running of society.

Capitalist production, in its endless search for profit, seeks to turn everything into a commodity. Only in this way can accumulation continuously expand. By releasing us from the tyranny of private ownership of the means of production, socialism makes it possible to reverse the trend for continuous growth, which is effectively driven by the competition between capitals for ever greater market share. It is plain that production will have to shift from being dominated by exchange—the path of the commodity—to that which is for use, that is for the direct meeting of human needs. Humanity can only flourish in circumstances in which the damage to nature that capital has wrought is overcome.

What is socialism? It’s a social system that guarantees for everyone what we’re not getting under capitalism: decent jobs, health care, education, a place to live, an end to invasions, wars and occupations. It’s possible to produce for people’s needs, not to profit the very, very rich few. People know in their bones that this economy can produce all these things and more. There’s an abundance of everything. Millions of empty housing units, enough for every homeless person! Plenty of land and food. High-tech factories not fulfilling their productive potential. Everything that workers need could easily be produced under socialism. We say that technology is so developed that everything can be produced in abundance with fewer and fewer workers. The technology is rapidly advancing everywhere. The whole world, which today has billions of people in poverty, could quickly satisfy all human needs under socialism.

The new society will be based not on exchange but on a natural self-sustaining economy where between production and consumption of products there will not be the market, buying and selling, but rationally planned organised distribution based on needs. The scale of the organisation must from the very beginning be world-wide or nearly so, in order that it may not be dependent in its production and consumption upon exchange with other countries which do not enter it. Experience shows that such dependence will immediately be converted into a means of destroying the new system. The type of organisation cannot be other than coordinated; not, however, in the sense of the old authoritarian centralism. For a real revolution it is not enough to replace the old boss with a new boss. If replacing one tyrant with another with a new lexicon constitutes “revolution,” then every U.S. election is a “revolution” equivalent to Lenin assuming power in Russia…and we’re back to the word “revolution” being meaningless. If you put a Trotsky goatee on the CEO and call him “comrade,” that doesn’t stop him from exploiting you. The oxen never plowed the field “for the good of the People.” The ox plowed the field under the weight of the yoke on its neck, under the threat of the lash on its back, and under the terror of starvation if it refused. Eliminating the position entirely is revolutionary. Anything less is reformist continuity with a reformist end result.

All reforms are transient and temporary and can be (will be) undone by counter-reforms. Thus, reformism is delusional in its belief it can offer any permanent solution. One could argue of course that the conditions of life for the average Cuban are much better under the Castro regime than under Batista’s dictatorship–and this is certainly true: Cuba has the highest literacy rate in the Western Hemisphere, more doctors per capital than any nation in the world, and a homelessness rate of virtually 0%. But, this is also irrelevant, as life for the average U.S. citizen was more comfortable under Clinton-Gore than under Reagan-Bush, but this does not qualify Clinton’s reformist election as a revolutionary. Also, such an argument opens the door for other comparisons: If the standard of living in capitalist Belgium is higher than in Cuba, does that make Belgium’s regime more “revolutionary”.

We stand for a system which will be world-wide, democratic, and based on a community of interest of the individual and society. Reformists do not stand for abundance, they stand for the restriction and waste. The Socialist Party holds that reformism has no value whatsoever. Individual reforms – that is legislation aimed at altering particular aspects of life under capitalism – may be to the advantage or disadvantage of the working class but as a policy such legal alterations are not "stepping stones to socialism" but the road to nowhere. Capitalism reformed is still capitalism. However beneficial (or otherwise as is now usually the case) individual reforms might be, the interest of the working class lies in overthrowing capitalism, not altering its workings.