More of the same or socialism? 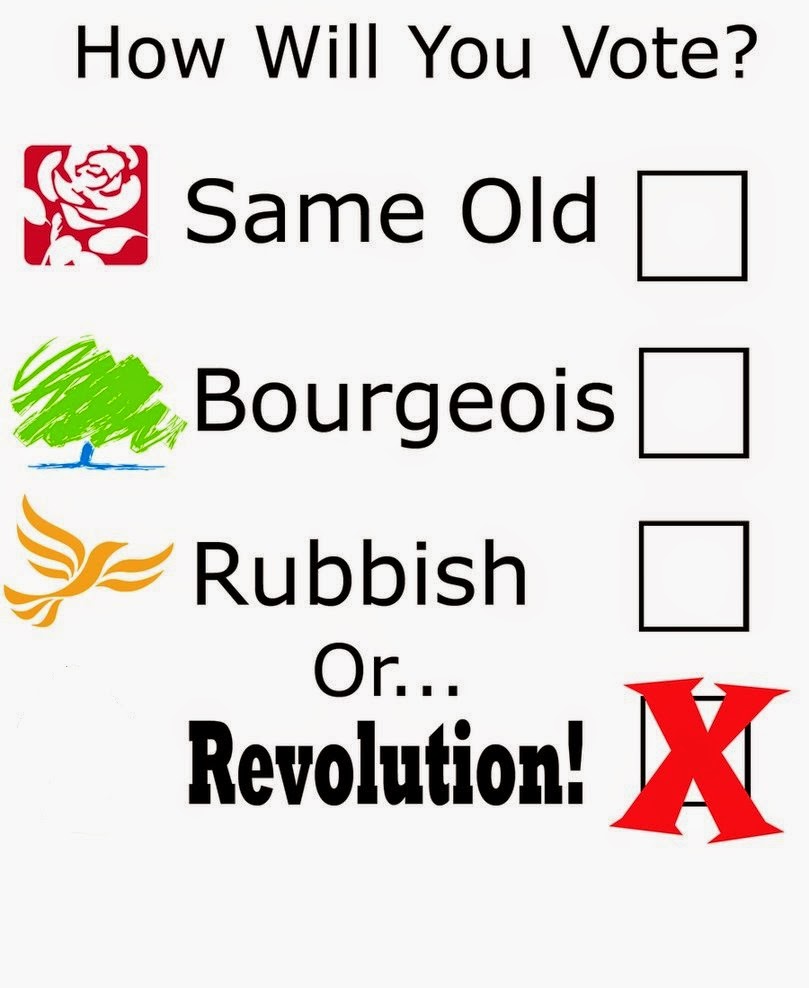 In this general election we're putting up a limited number of candidates, but are you one of those very many people who doesn't see the point in voting, and can't be bothered with politicians? Fewer and fewer people are bothering to vote in elections correctly realising that it will have little effect on their everyday lives. You may have noticed that whoever gets elected, nothing really changes. This is because politicians normally have no intention of changing anything. They're really doing very nicely out of the system as it is, thank you, slump or no slump. While they enjoy their executive lunches, cars and kickbacks, the rest of us miserable suckers are supposed to toe the line, "yes" the bosses, and work ourselves into early graves to earn wages that wouldn't buy one of their bottles of claret. We're not politicians, and don't let our party name, and the fact that we are standing for election, fool you into thinking we are. We represent an idea dismissed by politicians, and avoided by anyone who prefers the status quo. This idea is revolution.

Revolution is a scary word, but it doesn't have to be scary. If you prefer, think of it as a kind of social "upgrade", like building a better and faster computer. We don't advocate violence, although we can't know of course that the rich will quietly abdicate when they see that the game is up. But there is a personal revolution to face, as well, because a free society requires responsible members, not children who just play "follow-the-leader" and do as they are told. It's true that we get the society we deserve. Revolution consists in learning to deserve better.

Technology is producing abundance so fast that prices keep falling. It means that there is a higher level of civilisation, of science, or arts, of culture, of personal fulfilment, waiting to arrive. We are standing on the very threshold of that post-scarcity world. All we have to do, as individuals, is take one step. In our strange politics there is no mention of the EU. No mention whatsoever of local issues. No promises of "I'll do this and I'll do that", no flattery, no sweet talk. If you vote for us you won't get a wage rise or a tax cut. Those other candidates are happy to continue with the private property society. They are selling you out, and selling your kids out, and their kids after them. They are politicians. We are private citizens democratically organised as a party to advertise revolution but not lead it, to abolish political power not keep it for ourselves, to promote a free society without rulers, and to disband when we have served our purpose. So if you vote for us now, it's not because we've conned you into it with charming lies. It's because you've just taken that all-important small step, the step that begins the journey.

Is the revolution we are talking about at all likely? The odds seem to be stacked against it. Indeed, when we put forward the idea, most people can scarcely believe we are serious. "It's a nice idea but it will never happen" is the usual response. The assumption is that socialism will rely upon everybody being altruistic, sacrificing their own interests for those of others. But socialism would actually involve people recognising their common interests.

There was a time when the idea of a capitalist society would have been dismissed as a hopeless utopian dream. To a peasant living in feudal society, the idea of radical change would appear as hopeless as it may appear to you now. To them, feudalism would have appeared as eternal and unchanging and unchangeable as the present system appears to us now. So we're not too surprised that people find it difficult to take our ideas on board.

We have the ability to change things if we act together. The power to transform society lies in the hands of those who create everything—the working class. This is the source of our power, should we eventually use it. The power not to make a few reforms, but to change the whole system, to make a social revolution.