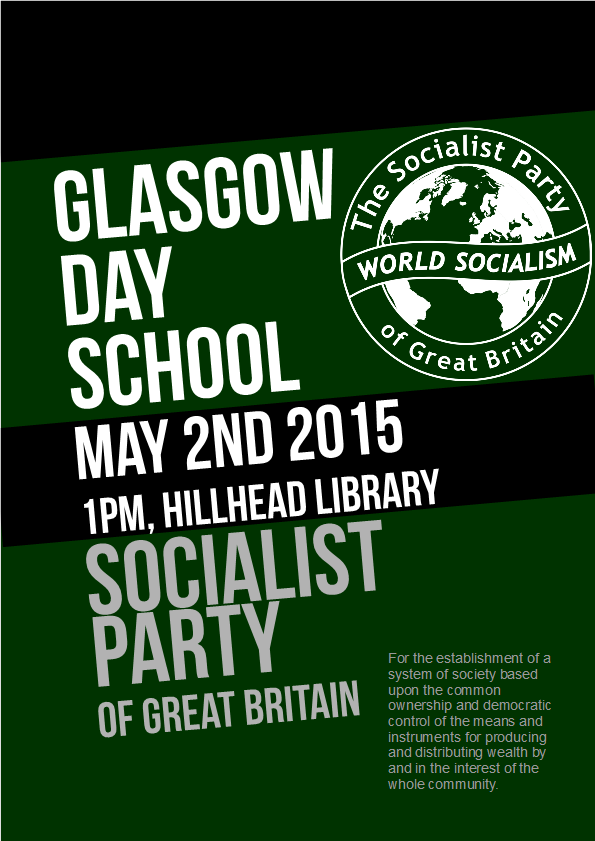 The Socialist Party of Great Britain is the longest surviving political party in the UK calling itself socialist. If the SPGB has lasted for this length of time it must have been because we fill some need in working-class politics in Britain. But what need? A distinguishing feature of the Socialist Party has been its insistence on the existence, as a precondition for socialism, of a working class imbued with socialist understanding ("You can’t have socialism without socialists") and that, once a sufficient majority of workers have acquired such understanding, we can, and we should, use existing electoral institutions to win control of political power with the sole purpose of abolishing capitalism and ushering in socialism.

The Socialist Party only contests elections on the "maximum programme" of socialism and nothing else, i.e. without any manifesto of vote-catching reforms to capitalism. This refusal to advocate reforms has been another distinguishing feature of the Party and although not against reforms as such (how could a party composed of workers and committed to the working-class interest be opposed to any measure that improved, however marginally and temporarily, conditions for workers) it opposes reformism in the sense of a policy of actively seeking reforms. Our position is that there is intrinsically nothing wrong with institutions where delegates assemble to parley (parliaments, congresses, councils or soviets). What is wrong with them today is that such parliaments are controlled by the capitalist class. Remove class society and the assemblies will function in the interest of the whole people. Socialism, however, will be a stateless society. The State, which is an organisation composed of soldiers, policemen, judges, and gaolers charged with enforcing the law, is only needed in class society, for in such societies there is no community of interest, only class conflict. The purpose of government is to maintain law and order in the interests of the dominant class. It is in fact an instrument of class oppression.

In Socialism there will be no classes and no in-built class conflicts. The phrase 'socialist government' or 'workers state' is a contradiction in terms. Where there is socialism there is no government and where there is government there is no socialism. As far as the machinery of organisation and administration is concerned, it will be local, regional, national and international, evolving out of existing forms. The Socialist Party proposes that the whole system of money and exchange, buying and selling, profit-making and wage-earning should be entirely abolished and that instead, the community as a whole should organise and administer the production of goods for use only, and the free distribution of these goods to all the members of the community according to each person's needs. The basis of industrial organisation and administration will start from the arrangements existing under capitalism at the time of the transformation, and this will present no difficulties because the socialist movement will already be thoroughly international, both in outlook and practical organisation. The revolutionary transformation of society must be brought about by the will of the great majority of the people if it is to succeed.

Glasgow Branch seeks to inspire other workers with a new social vision and ignite their imagination with revolutionary ideas and that is the purpose of this Day School. Discussion and debate are essential to the progress of the movement.

Admission Free. Questions and Discussion Welcome. Refreshments will be available