The political commentator Jonathan Cook on the aftermath of the UK general election wrote:
“Just like the political parties, we have been captured by the 1%. We cannot imagine a different world, a different economic system, a different media landscape, because our intellectual horizons have been so totally restricted by the media conglomerates that control our newspapers, our TV and radio stations, the films we watch, the video games we play, the music we listen to. We are so imaginatively confined we cannot even see the narrow walls within which our minds are allowed to wander.”

The “left” vote will always gravitate to the slightly less nasty party of capital, the lesser of two evils argument. No change is really possible because we can defer the choice to demand real change indefinitely. In fact, what actually happens is the political centre of gravity gradually shifts ever more to the right. It is dangerous to send any party the message that you have our vote no matter what. A man like Blair could destroy another nation, cause suffering on a scale unimaginable to most of us, and yet still claim the moral high ground because the alternative would be even worse. It is ironic that in the present situation, peoples’ anti-austerity hopes now lie with the pro-business, Murdoch supported Scottish nationalists with a policy of cutting corporation tax.

Some say: “People must take into account the real world. Small differences between the major candidates matter greatly to the outcomes for the most vulnerable people at home and abroad. Indifference towards that is callous.”

The small differences between the major parties are of zero interest to the public at large. People who are fed up with inequality, war, and environmental destruction should not hold their noses and vote Labour or Democrat in, not even in the marginal seats or the “swing states” where some leftists advocate doing that. Voters should be encouraged to support the candidate whose platform they agree with the most. Isn’t that what people are supposed to do in a democracy? Left candidates should offer voters that option anywhere they can get on the ballot. Of course an alternative party needs to build credibility in many ways including involvement in non-electoral campaigns. The Socialist Party often advocates spoiling the ballot or abstention.

Some on the left say “vote for Labour or the Democrats but then fight like hell against them”, but it takes time  for anything resembling a “fight the like hell” sentiment to materialise,  for it to sink in that the “lesser evil” really is nevertheless still evil, not simply “flawed”, “imperfect” or “compromised”.

If the left are going to be "pragmatic" If you are recommending people to vote Labour or Democrat, you doing so in the certain knowledge that a Labour or Democrat government is going to disappoint and that as result of that disappointment workers in the long run are almost certainly going to switch their allegiance back to the right.  Given the see saw nature of capitalist politics this is what invariably happens, does it not? Why not then just short circuit the whole lengthy expostion and simply say "Vote Tory!!”, “Vote Republican!!” Because, let’s face it, that is the long term consequence of voting Labour.  You are simply preparing the ground for the return of a future Tory government or Republican president in the wake of lesser evil’s inevitable failure. 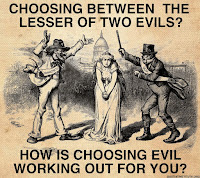 Even if, for the sake of argument, a Labour government or Democrat President was marginally less harsh in its anti-working class policies in the short term,  it is still in effect a vote for the for the right-wing, the “greater evil”, in the long term, given the see-saw nature of capitalist politics. Invariably the election of one capitalist party to power leads to disenchantment and the subsequent diversion of political support to some political rival, only for the whole process to repeat itself again and again. The political rival gets into power and disappoints its followers who then switch their allegiance back to other one. It is a treadmill we are talking about here and the only way to deal with a treadmill is to get the hell off it. At some point you just have to draw a line in the sand and say "enough is enough". Otherwise you are liable to find yourself sucked into a quagmire with no way out with no end in sight.

The Socialist Party campaign is issue-based - rather than candidate-based.

Only social ownership can tap into the new sources of energy and creativity which can eliminate the alienating nature of work and the desire to do one’s bit for the common good. Capitalism itself has provided the prerequisites that are essential for replacing production for profit. People  rightly object to the despotic pseudo-socialism which developed in the old Soviet Union. Humanity today faces a stark choice: socialism or barbarism. We need no more proof of the barbarity of capitalism, the parasitical system that exploits humanity and nature alike. Its sole motor is the imperative toward profit and thus the need for constant growth. Capitalism’s need for growth exists on every level, from the individual enterprise to the system as a whole. The insatiable hunger of corporations is facilitated by imperialist expansion in search of ever greater access to natural resources. The capitalist economic system cannot tolerate limits on growth; its constant need to expand will subvert any limits that might be imposed because to do so would require setting limits upon accumulation – an unacceptable option for a system predicated upon the rule: Grow or Die.