Common misconceptions about socialism why socialism it wouldn’t work, of how it goes against “human nature,” and that there is no incentive to work, and so on are caused by a basic misunderstanding of what socialism is. This is not surprising, given the fact that the word socialism is so loosely tossed around so much. Socialism is poorly understood. What is crucially missed is that socialism means more democracy and freedom, not less. Over a century’s worth of state propaganda regarding socialism emanating from the West and the USSR has intensely distorted the public understanding of the concept. Many associate it with state monopoly, authoritarian central planning, and a one-party police state. If socialism meant any of these things, it should justly be discarded in the waste bin of history. Socialism has traditionally meant the opposite of these things: it has meant worker freedom and worker democracy. The public as to what socialism really is, don’t generally have a clue and the ruling class media made sure of that. The education machine also does a wonderful job in mystifying the meaning of socialism.

Socialism, as commonly understood means widespread government ownership of business. This is not socialism as we see it. Socialism is not state or municipal ownership. Nor even ownership by co-operatives. “Socialism” is also used to refer to welfare state policies, and progressive taxes. Not only do these things have little to do with socialism, sadly the same concepts are peddled by both the so-called left just as much as the right. The only difference is that the former says this “socialism” might be good in moderate amounts, while the right sees it as tyranny. In any case, both sides are wrong. Socialism is not a reform, it is a revolution. We are not reformers — we are revolutionists. Let it be clearly understood that by revolution Socialists do not mean violence or bloodshed. We mean by revolutionary socialism the capture of the political powers of the nation by the working class as opposed to the capitalist class. Socialists would regard it a calamity to the cause, as well as to humanity to have a violent upheaval in society. If such should be the case it would be not the result of the teaching of socialism, but rather the result of the refusal of the rulers to accept the socialist democracy. For socialism offers a possible peaceful solution.

Socialism means a full, happy and useful life. It means the opportunity to develop all your faculties and latent talents. It means that, instead of being a mere chattel bought and sold on the labour market, an appendage to a machine, a robot to produce of wealth for others, you will take your place as a human being in a free society of human beings, and a participant in its decision-making committees and councils. Your work in a socialist society will not be dependent on the caprices either of the capitalist market. When things are produced to satisfy human needs, instead of for sale and profit, involuntary redundancy and lay-offs will be an impossibility. The "demand," instead of being limited to what people can buy, will be limited only to what people can use. Nor will unemployment because of labour-saving new technology be possible in socialism. Instead of dismissing workers from jobs, the improved methods and facilities will cut hours from the working day. Full employment and jobs for all under capitalism are only possible when capitalism is preparing for, or engaged, in war. Socialism alone can give jobs for all and open wide the doorway to economic opportunity. Hours of work in socialism will be the minimum necessary to fulfill society's needs. Work is not the end and aim of man's existence; it is the means to an end. We do not live to work; we work to live. Socialism will, therefore, strive in every way to lighten the load of mankind and give the leisure to develop faculties and live a happy, healthful, useful life. By the elimination of capitalist waste and duplication caused by irrational competition, and by opening jobs at useful work to all who are currently deprived of it, we could produce an abundance for all by working four hours a day, three of four or five days a week, and thirty or forty weeks a year. People will be able to take regular sabbatical years. The so-named “gap-year” will be available for all age groups. 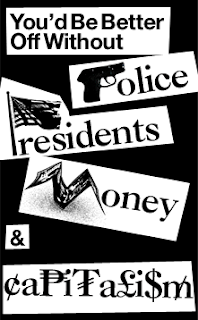 Socialism is, to put it in the simplest words, another way of organising society to the present system. It isn’t “redistributing” the wealth, welfare programmes, or “equal shares” for everyone. Socialist production is socialised, and the ownership of the means of production is also socialized. This means the means of production and distribution, the machines, the transport infrastructure, all belong to the people in common. Writing in the 19th century, Marx envisioned some kind of paper certificate to represent the amount of labour performs as a form of access to the common treasury, and unlike money it would not circulate. Obviously in a modern economy this kind of system for accounting of labour credit would be fraught with problems even with the power of computers. Better that we do away with any form of artificial rationing and enjoy free access to the fruits of our collective labours.