Socialism - The future of Humanity. 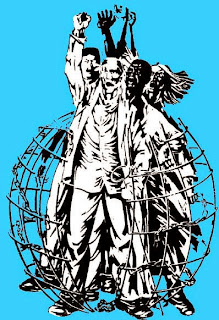 The term scientific socialism was used to differentiate it from utopian notions of socialism which were rich in imagination but had little roots in social action or the history of social progress. Scientific socialism did not provide any technological blueprint for building socialism, it only provided broad general guidelines for organising a socialist revolution. And these broad guidelines have been proved to be essentially correct even in considerably different circumstances. Socialism as an alternative to the current global order is commonly ignored in advanced Western societies and attacked as ‘outdated’ or even ‘useless’. The idea of working people taking democratic control of all aspects affecting their lives is not a new notion. It lies at the very heart of socialist thought and practice. Workplace democracy is something that our capitalist masters can never deliver because the key to their profits is absolute control over “their” workers. General assemblies in every neighbourhood might be hard to imagine but we are able to have a direct say through councils organised at community levels. Direct participation allows people to determine how resources are allocated in their communities. Socialism is a stateless, classless, communal society not only aims to transform how we produce the things we need and how we organise our economic relations but also change how we interact socially. Only through socialism can we end exploitative and divisive capitalist production and build the system which produces a harmonious, peaceful society where everyone produces according to their ability and everyone receives what they need.

With the rise of machines and robotics, advances in technology there are plenty of reasons to believe that we have reached a post scarcity economy. We produce a surplus. Of course, we still have people in the world that are starving but we actually have the capacity to feed them, to feed everyone, even now, even if we don’t have the will. It’s not a matter of scarcity; it’s a matter of the organisation of labour. It is time to think beyond capitalism and contemplate a new model. It’s time to leave capitalism behind.

In socialism can everyone have anything? Anything at all? The answer will be almost certainly no. Resources are still accounted for and allocated in some manner. But socialism will be massively productive and efficient, allowing for the effective decoupling of labour and wages for all of economic activity. People have no financial need to work, as their benefits are more than enough to provide a comfortable life, and there is, clearly, universal health care and education. Yes, some people might even decide not to work. So what? We think most still will. However, if they so choose they can also get a job. No enforced unemployment. Many people seek work for personal enrichment or for the desire to promote social welfare. Socialism will provide job satisfaction. Of course, a challenge is how will society get someone to do the menial jobs that cannot be done by automation. These tasks can be rotated and of course no-one is condemned to a career of performing dirty and dangerous jobs and rather than be seen as demeaning there is no reason why they cannot be ennobled.

The amount of benefits available to all citizens is in excess of the needs of the citizens. Therefore, money is irrelevant to the lives of the citizenry. Because the welfare benefit of socialism is so large, and social pressure is so strong against conspicuous consumption, the average person never pays any attention to the amounts allocated to them, because it’s perpetually more than they need. But if they go crazy and try and acquire, say, 10 houses or 100 cars, the community simply says “no.” Behind the scenes there is a massive internal accounting and calculation going on — the ‘economics’ still happen but aren’t based on a monetary value , and people don’t acquire things based upon an exchange value. Socialism re-defines economics. Cities, housing, transportation, production of goods — all will be restructured. Money goes the way of the dinosaur and the banks turned into community centres.

Planning in socialism needs to be multi- leveled, with a limited sphere of responsibility assigned to a central administration, while individual localities and municipalities maintain relative autonomy for planning similarly specific and limited areas of responsibility. Such a decentralised form of planning should leave room for a different type of planning. Beyond a vertical political or state system (multi-leveled, with democratic controls) there is lateral or horizontal planning through the initiatives of the enterprises themselves.

Socialism is not the introduction of planning into an unplanned market society through state -ownership and control over production. It is the transfer of control of production to the direct producers and consumers themselves. Socialism is the abolition of market relations altogether and the elimination first of all of the labour market. As the labour power of workers is no longer treated as a commodity, socialism would be a step forward in the control of economic life by the producers themselves. A system of freely associating workers operating according to a common plan will be the result primarily of the development of lateral ties between all the various enterprises themselves.

Human beings will no longer behave as competitive predators upon nature, but become mutual guardians of it. One thing is clear: In socialism, the ownership of ideas will be exposed as a sham and a delusion. It follows that the elaborate fiction of intellectual property will simply be abolished. Owning ideas is impossible; the regimes of copyright, patent, and trademark have been enshrined in law and in popular consciousness to the detriment of creativity and the sharing of the infinite bounty of the human imagination. Since artists will no longer need to fear being ripped off and lose remuneration for their effort, the dubious protections copyright provides will serve no purpose. At a stroke such impediments to freedom would be done away with, and the problems and promise they have so long obscured will become immediately apparent. A socialist world is possible. It is necessary. It is the future of humankind.