Fight for your World, Not your Country 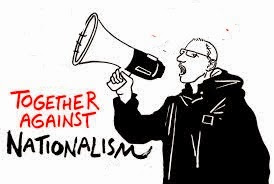 We hear it said from many sides that the nations of the world have interests that are not in harmony with each other, and that each nation has to look to those things that it enjoys to safeguard against the aggression of other countries. This attitude is taken by a vast number of people who make these assertions which the facts of reality entirely dispute. This "Nationalism" which has been injected into the brains of the masses springs from a very reliable source, i.e., its origin in the condition of property in a given country.

To get at the ideas that flow through the institutions that exist and reflect definite interests, we must see who it is that owns property in different nations. By property we mean those things that the nation is dependent upon to make its livelihood.

Mines, forests, mills, mines, railways, waterways, are indispensable to the life of modern society. Around these means to sustain human life, we have a set of relations that correspond to the mode of production and distribution. That is a process that calls for collective effort on behalf of the members that take part in the operation.

Today it is not every person that does this work for there are a number that live at the expense of those who do the work. Those that own the means to produce the necessities of life are in a position to demand the great majority in society to rally to the call of the master if they desire to live. This system is the most profitable one that ever was, from the standpoint of the masters with the great amount of wealth that falls to their lot. With this wealth there is the necessary upkeep to maintain the many institutions for the purpose of educating the workers to accept the teachings of the master class. At the schools while an infant, the child is taught the blessings and liberties that are his through being born in a particular country; also that the child is of a superior standing than the child of another country, thus breeding national hatred in the public schools. Then comes the churches to mold the child in its acceptance of the servile conditions of this system.  The press with its powerful editorials, bold headlines of the atrocities upon some of its citizens, gotten up on most occasions by the paid servants of those that rule. The desire for "Nationalism" is created by those that are benefited by it. And this nationalism is begotten of the conflicting interests of the masters of the different nations that are competitors for the markets of the world in which they hope to get rid of the wealth extracted from the wage slaves…

To speak of "Nationalism" just means to talk of the interests of the rulers of that nation. And to accept the teachings of that "Nationalism" is to segregate the workers of the world and make out of them enemies ready and willing to fly at each other’s throats when the exploiters want them. The boundary lines of the various countries do not cover the cloak of exploitation and furthermore, are of no concern from the viewpoint of a slave. …
Seeing that the workers have masters and little caring who that master may be behooves every slave to make inquiries into the condition that is his. We are the producers of the world's wealth, yet we get simply a slave's portion, whenever we may be slaving.  The slaves of England, Germany, Austria, France, Russia, USA and other countries under the yoke of capitalism, live under the same general conditions of wage slavery. This is not altered by the fact that slaves fight the slaves of other nations. We as workers of the world that are exploited by the capitalist class have a cause that is a common one. Our cause is that of the proletariat, the dispossessed workers of every nation, that are being crushed by the load of this damnable system. We are international in kind, and our enemy is the class that live from the produce of our toil. That and that alone is responsible for the plight of workers of the various nations of capitalism.

Our efforts must be bent to the cause of our enslavement, capitalism; and in that case it precludes the workers from taking action in national wars, that does of necessity undermine the international character of the proletariat. Should the workers bend their efforts to the elimination of this system, the bonds of our common cause binds us closer together. The international aspects of our movement will be well looked after, provided we are not stamped by the ideas of the jingoes, nationalists and others of their ilk…

The only movement that has outlined the position of the workers in this war is the Socialist movement, based upon the class struggle, for it is the direct antithesis of "Nationalism" being international in its make-up. …Every nation to maintain its system of slavery had to have its guards to defend itself against the aggression of the other slave masters.

The facts of everyday life show that the workers did not have anything to do with the calling of the war, neither were they anxious to impose the edifying conditions upon any other peoples. The real trouble was that the masters’ interests were endangered through competition with each other, and they called upon the slaves to fight it out. And that the manufacturers of armaments wax fat at the large profits derived from the sale of the engines of destruction, explains their attitude on war very ably.

It is left to the Socialists (worthy of the name) to explain the facts of wars and the reason for them. For it must be clearly understood that as long as we permit a system of robbery to be, war will be an effect of it. Realizing that must be the case, the cause of Socialism wages its unrelenting propaganda against the system that breeds them.

"Nationalism" it denounces as anti-socialist, and those propagating such ideas antagonistic to the clear-cut Socialist movement. Let us get away from the teachings of our masters, national hatred, superiority to other nations, etc., and spread the ideas of our position as a slave class. If that is done there is no danger of the workers rushing at the throats of other workers when called upon to do so. This strife taking place in Europe will eliminate a lot of "national socialists" which have been a hindrance to the furtherance of International Class Solidarity, an essential condition for the building up of the International Socialist Movement, whose mission is to dissolve the system of capitalism.

"Workers of the world unite, you have nothing to lose but your chains and a world to gain," is as true today as when it was given to the proletariat in the last century by Marx and Engels, the pioneers of the Socialist movement. If the evils of today have got to be done away with, let that be our slogan.

Email ThisBlogThis!Share to TwitterShare to FacebookShare to Pinterest
Labels: nationalism