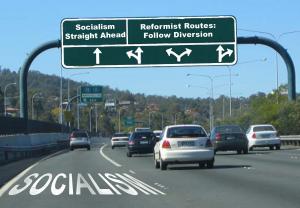 There are two paths we can follow. We can say: “Let’s just deal with the easier day to day problems and just raise topics where we can be sure fellow-workers will agree with us. Talking about revolution and socialism and stuff like that turns them off.” Working people will declare “The system is just too big, too powerful to go up against. There is enough local problems in the factory, in the community and at home, so don’t talk about political things.”

The Socialist Party’s way is different.

We explain it is only by understanding how capitalism operates against the interests of working people, of how capitalism must be fought by the working class who can be united behind it and when the people are equipped with an understanding of capitalism as our enemy, we can advance towards revolution. Our choice is a future where we workers will run the factories, produce for our needs and not for the profits of the capitalist bosses. Only by completely getting rid of this system of wage slavery and its law of profits and the system in which the capitalists own and control everything can we achieve socialism. Only by getting rid of the all the sources of our problems, the system of capitalism, that we can build a new society run by and for the working class. It must be understood that distribution is always ultimately controlled by those who own and control production. Today the bosses own. Tomorrow,  the workers would own production and would therefore be in a position to control and direct distribution in the interests of the working masses.

The Socialist Party has no consciousness of impotence, no consciousness of smallness. We represent the future. We represent the conception of socialism. We stand should end of poverty and inequality. We seek to win working people from the fear of war and for peace to be enjoyed by all. We work for a world in which the exploitation of man by man shall cease. It is the capitalist system which produces misery and disaster. The Socialist Party is never more determined to achieve the goal of socialism than we are on this day. We see a future free from the anxieties and worries of today. The believe that conditions can be changed for the better if the people are willing to fight for this. Although they do not own or control the industry, they in fact are turning the wheels that keep all industry going. With the ending of capitalism the people would also decide how this industry was to be run. Everything created and valued by mankind, all wealth, has been produced as a result of human labour being applied to the materials supplied by nature. The Socialist Party believe that, just as in the past, no progress in improving the lot of the working class will be brought about without the struggle of the people. Decisions can never be left to others. The people must win state power. They must take it out of the hands of the capitalists to ensure that the transfer of the economy to the people is carried out. This capitalist society demands, not bandages but a blood transfusion.

The capacity of mankind to make use of the forces of science and technology has increased a hundred-fold during the last century. Yet, compared with this rapid growth, the prosperity among the people has been lamentably slow. There is no lack of the actual things for they exist and are available in abundance. Nor is their lack of hands and brains to turn raw materials and natural resources into finished articles for human use. Yet the people are not better off.

Working men and women face innumerable hardships. On every side of them is distress and uncertainty, ever new threats to their security. Politicians make all kinds of promises for a future time but for the workers with their present troubles they have no help. The greatest need of to-day is clear understanding of the present conditions and the marking out of the path to travel. Where can it be found? Exposing the tissues of lies and the confusion of sham solutions has been the Socialist Party.

If workers do not awaken in time a terrible fate awaits us. The greatest need of the workers in this country is a powerful potent socialist party. Socialism means the common ownership of all natural resources and of all social forces for the satisfaction of all social needs. It, therefore, involves not merely co-operation between individuals and groups of individuals, but also co-operation between peoples of other lands. The Socialist Party seeks to establish the co-operative commonwealth. Socialism is a system of universal co-operation for production for use. Capitalism and cooperation are incompatible. It is as idle and utopian to dream of establishing peace in the midst of capitalism. What all workers must understand is that their misery is due to exploitation carried on by the capitalist class. We must transform the economic struggle into a political struggle. We must overthrow the system of exploitation itself. We must abolish the wage system itself. 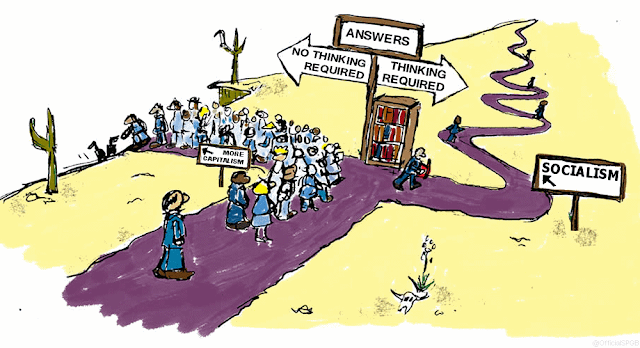