The working class are the creators of all wealth in society. Under the rule of the capitalists, there can be no freedom for the workers – only freedom to be exploited as wage slaves. The Socialist Party says plainly that mere reform of our existing society is impossible, or if possible, useless. When the foundation is insecure, and the edifice is crumbling, there is nothing for it but to build anew. We in the Socialist Party are revolutionists, not reformers in that we have no confidence in any measures of amelioration. We shall not throw our lot in with silly or self-seeking charlatans nor waste another moment in considering their contemptible social reforms.  The emancipation of the wage-slaves will not fall, like manna, from heaven. Nor yet will they be led into freedom, as into the promised land, by inspired leaders of mankind. The workers will only be freed by those whose interest it is to do so—the workers themselves.


Wherever people work for wages, they have been robbed of the land, the mines, the factories and so on; and they are steadily robbed of everything they produce, because it doesn’t belong to them when they have made it.  It doesn’t make any difference if the state nationalises some, or all, industries — as we know in this country — the people still don’t own them. That is why they have to sell their energy and skill to those who do own them — and the state can be a more powerful and ruthless boss than private companies. In socialism it will belong to them. The land and factories will belong to the whole people. But that doesn’t exist anywhere in the world yet. It is the next stage in the evolution of society — the system to supersede capitalism. The sooner we make the change-over the better.


Every time a war ends, they say, “Never again.” Every time trade picks up after a slump they say, “It won’t happen again. We learned the lessons.” They try trade agreements, altering the bank rate, juggling with currency rates. None of it works: recessions still happen, just as there is always a war going on somewhere these days. If things improve, the government takes the credit. If things go bad they blame the previous government or another country. The truth is that they have no control at all over the economic convulsions of capitalism, because they are uncontrollable. Recessions and wars are essential phases in its progress. They restore a sort of balance for a few years. But what a ramshackle way of organising the production and distribution of goods in the world. Their computers are never programmed to tell us how world socialism, with production for use not for profit, would employ the earth’s resources. They assume that production for profit will go on forever, and then argues that this system must be reformed to prevent it from destroying mankind’s habitat. Better surely to argue for an end to capitalism, since it is a system which generates waste and seeks constantly to increase the quantity of materials processed, year by year.


Everywhere the capitalist “mode of production” prevails: we see men and women who possess no land, no tools, nothing, who are driven by fear of want to sell their labour-power by the week or the month, mortgaging their lives in instalments so as to survive till the next pay-day. We see them producing goods galore, “an immense accumulation of commodities”, all their own work, yet they remain unable to afford most of what they need. We see human toil and human skills diverted from man’s real needs — food, clothing, health, housing, culture — to pander to the aristocracy of Big Business, the wasteful war-machine, the accountants, the luxury resorts, and so on. 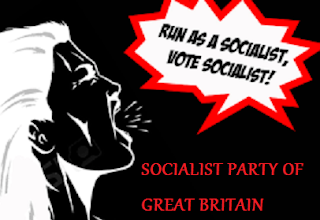 This is what the Socialist Party oppose: the global system of exploitation of the many by, and for the benefit of, the few. A system which combines wanton waste with wasteful want.
By ajohnstone at March 29, 2019