The Cul De Sac of Separatism

In a society of economic scarcity, hardship, and poverty, questions about who is more poor and more needy, among the poor, is directly and indirectly attempting to hide a more important question, why should anybody have to live in poverty and hardship? It is that lack of questioning which allows and drives the development of racism, sectarianism, and xenophobia. The Socialist Party stresses our common humanity. Real or imaginary “evidence” of colour of skin or nationality are used to break the unity of humankind. It is no longer an age of great enlightenment. Something is clearly wrong in a world where a rise in productivity is often seen as a curse and when a system can be driven by arms spending but cannot develop of education, health, or the protection of our environment. Across the world, the state is increasingly failing to deliver any form of social redistribution to the most disadvantaged. And some areas, most of which are in Africa, have seen not just increasing poverty but actual social collapse, brought on by economic crisis, which the state has been unable to prevent.


For sure, in 1917 the Russian Revolution did capture the imagination of people throughout the world and did inspire millions of downtrodden to action. For quite a time people believed a socialist future was being forged. Those hopes vanished a very long ago but it does not show that the socialist transformation is impossible. The failure of the Welfare State exposes that the reformist humane management of the capitalist system is impossible.


To try to maintain their position, the capitalist class cut the pay of the poorest in a myriad of ways and vilified immigrants in the newspapers they owned or influenced. The workers had to be distracted from the rise in inequality and poverty. After decades of innuendo and outright propaganda suggesting that immigration was the main source of most of their woes there were some people who believed the propaganda that all the problems in health, housing, and education were due to immigrants, and some really thought “their” country was being taken over by immigrants, by refugees, and even by Islam. Without the foreigners, they were told, there would be plentiful good jobs for all, without the newcomers, their children would get better schools, without immigrants there would be fewer on the hospital waiting lists, and best of all, we would all live in the house of our dreams, a home currently occupied by asylum seekers who have jumped the council housing queue. Those “non-British” have stolen “our birth-right” is the refrain. All this was said to distract people from looking at who was actually becoming much wealthier. If you spend days, weeks, months, years, telling people they are under threat, that their country has been stolen from them, that they have been betrayed and sold down the river, that their birthright has been pilfered, that their problem is they’re too slow to realise any of this is happening, then, at some point they are going to react.


Whatever the reason or pretext, however, ruling classes throughout history have instigated or endorsed the oppression of different groups in order to maintain or create divisions amongst those over whom they rule. For the Socialist Party, our aim is to overcome the divisions. Opposing racism and nationalism ultimately means challenging the very foundations of capitalism itself. The idea of one person working for the personal enrichment of another, wage slavery, will be seen to be as odious and ‘unnatural’ as the notion of one person owning another, chattel slavery.


Nationalism is a dead-end remedy. We must empower, educate, organise and fight. This is the only way our lives will improve. There is no automatic socialist future, no guaranteed social progress and no final crisis of capitalism leading by itself to utopia. The choice between socialism and barbarism is still open, and its outcome depends on each one of us. We must create a solidarity without borders, inspired by a vision of change. Building solidarity that consciously connects struggles across borders will be a 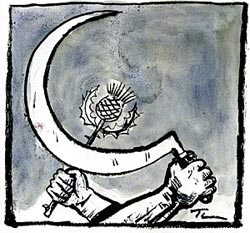 formidable challenge, but we must face the future not with fear or despair, but with determination rooted in the socialist ideals which continue to motivate us. “Our“ nationalism is not presented as nationalism, “we” have patriotism.

“National liberation” or “For Independence!” are  empty slogans which demagogues  fill with a false and even dangerous content.
By ajohnstone at March 04, 2019